Figure 1: View toward the south from Tupper Lake at 8 p.m. on Feb. 11, 2020. The constellation of Orion is centered in the sky, with his belt 45 degrees above the horizon. The belt star, Mintaka, is just slightly south of the celestial equator. The bright, reddish star Betelgeuse marks Orion’s armpit near the centerof the hexagon and has been dimming. (Provided image)

Figure 2. Image of Betelgeuse made with the Atacoma Large Millimeter-Submillimeter Array showing it to be about 1,400 times the size of the sun. (Provided image — ESO/NAOJ/NRAO)/E. O’Gorman/P.Kervella)

Figure 3. Light curve of Betelgeuse showing its brightness variation between August 2018 and January 2020. The current dimming is the most dramatic in modern times. Betelgeuse is too close to the sun to be observed in May, June and July. (Provided image — American Association of Variable Star Observers) 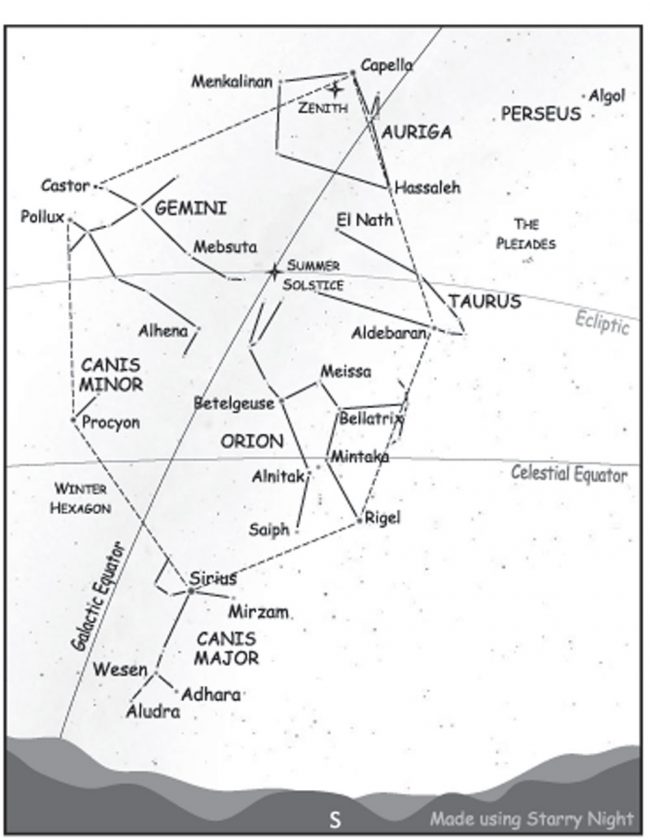 Figure 1: View toward the south from Tupper Lake at 8 p.m. on Feb. 11, 2020. The constellation of Orion is centered in the sky, with his belt 45 degrees above the horizon. The belt star, Mintaka, is just slightly south of the celestial equator. The bright, reddish star Betelgeuse marks Orion’s armpit near the centerof the hexagon and has been dimming. (Provided image)

The large, bright, glittering constellations of winter illuminate our southern sky in the early evenings of February.

As shown in Figure 1, at 8 p.m., Orion stands high in the south above Tupper Lake. Stretching 30 degrees vertically and about 20 degrees horizontally, it is one of the largest constellations in the sky.

The hunter stands with his club raised high as though to point at the position of the summer solstice where the sun will be on June 20, 2020 at 5:44 p.m. That position is just east of the equator of the Milky Way galaxy that arcs across the asterism of the Winter Hexagon made up of the stars Capella in Auriga, Castor and Pollux in Gemini, Procyon in Canis Minor, Sirius in Canis Major, Rigel in Orion and Aldebaran in Taurus.

The rich star fields of the Milky Way contribute to the glittery nature of this part of the sky.

In the middle of the hexagon is the bright, red star, Betelgeuse, pronounced BAY-till-juice, BEE-till-juice, or BET-ill-juice … its pronunciation varies among astronomers and the true pronunciation is long lost it the mists of history. The name roughly translates from Arabic to “armpit of the great one” in reference to its position at the base of the hunter’s upraised arm. This is the only star that is close enough and large enough to have been imaged by our telescopes. 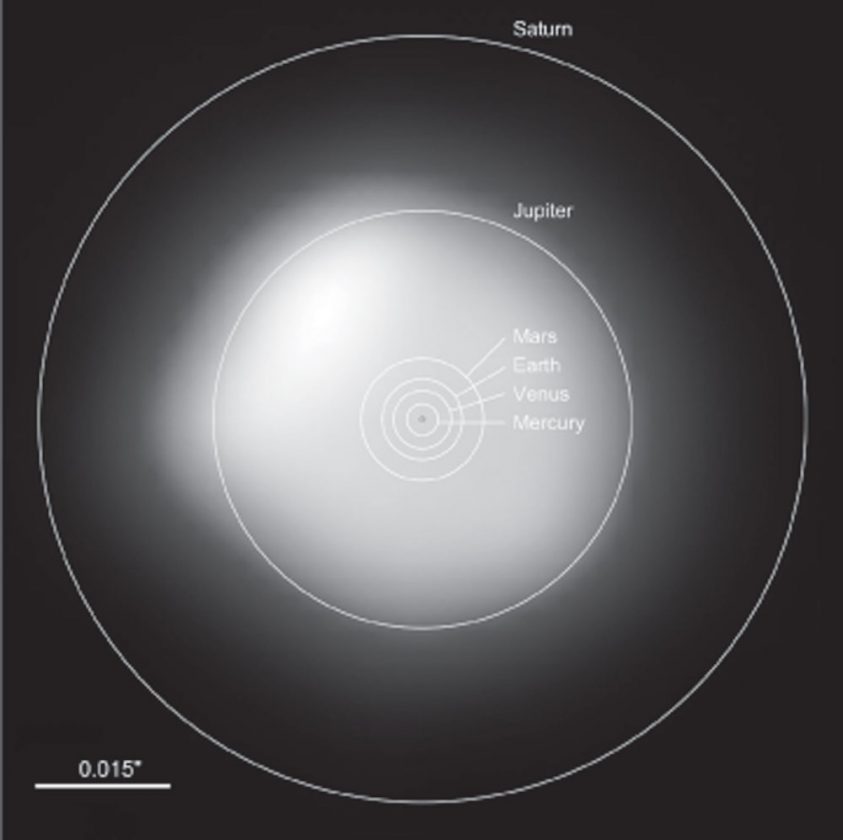 Figure 2. Image of Betelgeuse made with the Atacoma Large Millimeter-Submillimeter Array showing it to be about 1,400 times the size of the sun. (Provided image — ESO/NAOJ/NRAO)/E. O’Gorman/P.Kervella)

The image in Figure 2 was created from microwaves detected by the Atacama Millimeter/Submillimeter Array (ALMA) in Chile. Precisely determining the distance to Betelgeuse, though, has proved challenging. It is currently estimated at about 700 light years, but there are constant updates as more measurements are made with different instruments. The size is also difficult to measure as Betelgeuse varies in both size and brightness. Also, since different layers of the atmosphere glow more strongly in some bands of light such as infrared or ultraviolet, the measured size depends on the instrument used. The current estimate of its size compared to our solar system is included in Figure 2. With a size about equal to Jupiter’s orbit, it’s around a billion miles in diameter.

Recent observations with the Very Large Telescope of the European Southern Observatory revealed a plume from Betelgeuse billowing out to the size of Neptune’s orbit (about 2 billion miles in radius) and huge bubble boiling on the surface. This star is truly a bubbling, frothing cauldron of a nuclear explosion contained by gravity. And a huge explosion it is. Estimated to be about 20 times the mass of the sun it is burning through its fuel rapidly. Its age is estimated from theoretical models to be less than 10 million years and yet it is already in its death throes, very unlike our 5 billion year old sun. It has burned through most of the hydrogen in its core, fusing it into helium and is now fusing helium to carbon and oxygen that sink to its center. The star’s interior is fully hot enough to easily fuse these into heavier elements such as neon, magnesium, sodium, silicon and finally iron. The formation of the iron core will lead directly to the death of the star in a spectacular supernova explosion.

Iron has the most stable nucleus of all the elements. Elements lighter than iron release energy when their nuclei fuse into heavier elements such as hydrogen to helium and helium to carbon. Elements heavier than iron release energy when their nuclei break apart in nuclear fission. The Uranium 235 used in our nuclear powerplants releases energy as it fissions into lighter elements, typically krypton and barium. Iron, however, absorbs energy no matter what change takes place in the nucleus. This causes the iron core in giant stars to cool and contract since they only absorb energy. The outer layers of the star thus lose the support of the outward pressure of the fusion core — the explosion that gravity has contained since the star formed. This causes the star to initially implode, then explode as the outer layers bounce off incredibly high density of the collapsed inner layers. Betelgeuse will explode this way and very soon in astronomical terms … probably within 100,000 years!

But Betelgeuse has been acting peculiar this year, exciting astronomers with the prospect of a nearby supernova sooner than expected! The excitement is due to the fact that Betelgeuse began dimming last October and is now 2.5 times dimmer than usual, dimmer than modern astronomers have ever seen it. We’re used to Betelgeuse and other gigantic stars varying in brightness. Betelgeuse has well-documented brightness variations over 425 days, 100-180 days and 5.9 years. It’s also blasting out huge plumes of gas and dust.

So why has it dimmed so dramatically this year, as shown in Figure 3? Some have suggested that it’s just due to the overlapping of other variation cycles, perhaps with a longer cycle that we have not yet documented. Others think it may be obscuring material being blown off the surface of the star. As of this writing, the brightness has not yet started rebounding, though astronomers fully expect it to do so. But all we can do is wait and see.

Figure 3. Light curve of Betelgeuse showing its brightness variation between August 2018 and January 2020. The current dimming is the most dramatic in modern times. Betelgeuse is too close to the sun to be observed in May, June and July. (Provided image — American Association of Variable Star Observers)

We have not been able to observe the death throes and explosion of a known star. All the supernovae we have observed have been stars too faint and distant to have been observed before they exploded. So it is certain that we’ll learn much as we continue to observe Betelgeuse and hope our species lasts long enough to actually watch it explode. When it does, it will be spectacular. It will be brighter than the full moon and visible during the day. Even so, it’s distant enough that the radiation will do life on Earth no harm. It will stay bright for only about four months before fading away, leaving a supernova remnant much like the Crab Nebula in nearby Taurus from a supernova observed in 1054.

As you’re outside on a cold, clear, February night, compare the brightness of Betelgeuse with its neighbors. Currently, it’s not as bright as nearby Aldebaran so take note of that. It may be the only time in your life when Betelgeuse is dimmer than Aldebaran. Then again, it may not be. We just don’t know. All of humanity can only watch and wait.

Betelgeuse and other stars are among the celestial wonders that volunteer astronomers of the Adirondack Sky Center and Observatory can show you at the Roll Off Roof Observatory (RORO) above Little Wolf Pond in Tupper Lake. We have public stargazing on the first and third Fridays of each month during the winter if it’s clear. Please check our web site at https://www.adirondackskycenter.org and our Facebook page for updates on the weather and whether we will open. You can sign up for email updates on observing and, on our public observing days you can call the RORO at 518-359-6317 to talk with one of our astronomers.