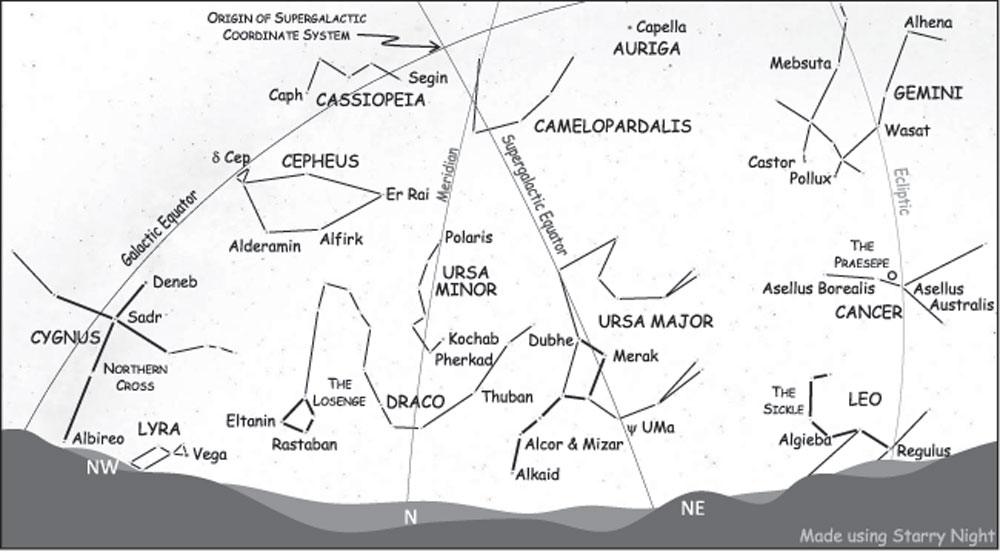 View toward the north northwest from Tupper Lake at 8 p.m. on Jan. 14, 2020. The “meridian” is along the line from due north, through the zenith, to due south. Polaris is always less than a degree from this line for all northern hemisphere observers. Part of the constellation of Cygnus forms the Northern Cross, which stands opposite the Praesepe star cluster in Cancer that translates to “the manger.” Christians appreciate this alignment as it occurs between the celebrations of Christmas and Easter. (Provided image)

Turning to the north, this week, we see the great bear rising from the northeastern horizon. In the fall, Ursa Major walks along the northern horizon seeking a den for hibernation. It spends the spring rising so that it’s at its highest with the bear’s back knee, marked by Psi Ursae Majoris (psigh UR-say Majoris), directly overhead in the early evenings of May.

The diagram for tonight shows the bear’s tail has just cleared the northern horizon by 8 p.m. Cassiopeia, on the opposite side of Polaris, is starting to descend toward the western horizon. At this time, one of the blankest parts of the northern sky rises to its highest point. The constellation of Camelopardalis, the camel, is fairly devoid of bright stars. The camel, like Ursa Minor. whose tail is the handle of the Little Dipper, hangs upside down as seen tonight and the minimalist stick figure marks its legs and belly. In July, the camel walks along the northern horizon. Though they are no longer native to North America, they did evolve here. The fossil record shows camels in North America from 46 million years ago to 6 million years ago when they crossed land bridges to Asia and South America and died out here. So perhaps the cosmic camel is looking for its ancestors in July! Of course, it’s walking along the northern horizon in Asia in July, too!

Slicing through both Ursa Major and Camelopardalis is the equator of our home supercluster of galaxies, Laniakea. The Milky Way and local group of galaxies are bound to the Virgo cluster of galaxies. The supergalactic equator extends below the northern horizon into Virgo that won’t rise fully above the horizon until 1:30 a.m. tomorrow. The equator is along the highest density distribution of galaxies and galaxy clusters and the “prime meridian” of the supercluster, the origin of our supergalactic coordinate system, is where it crosses the equator of our own galaxy in Camelopardalis.

At this time of year, between the Christian celebrations of Christmas and Easter, their symbols are on opposite sides of the early evening sky. In the east, where cosmic objects rise, the star cluster of the Praesepe, Latin for “manger,” rises in the constellation of Cancer. In the west, where cosmic objects set, a portion of the constellation of Cygnus known as the Northern Cross, stands vertically on the horizon. Of course, since people named the objects, it’s not really a cosmic alignment, but still comforting for Christians.

Ancient Greeks and Romans named this cluster the Praesepe from which the two adjacent stars, Asellus (ah-SELL-us) Borealis and Asellus Australis, the northern and southern donkeys, are feeding. In 1609, Galileo observed this cluster and counted 40 individual stars. It is now known to have around 1,000 star members.

This cluster is also known as the Beehive Cluster and is visible without the use of binoculars or a telescope. In the dark Adirondack skies, the early spring is the best time of year to view this cluster as it is high in the early evening. I look for it halfway between the twins of Gemini and Leo the lion. The bright stars Castor and Pollux mark the heads of the twins who are tall, thin young men with feet so big they’re dipping in the Milky Way. Leo’s mane is marked by the bright stars of the Sickle, a backwards question mark. If skies are a little bright, the Praesepe is quite easy to spot in binoculars.

At a distance of about 600 light years (1 light year equals 6 trillion miles), it’s closer than most star clusters which is what makes it easily visible. Of course, the Pleiades are 30% closer and much brighter. The Praesepe is about 40 light years across, which gives it the cloudy appearance when seen by eye.

One important aspect of the cluster is that it lies very close to the ecliptic. This means that the sun, moon, and planets pass close to it and sometimes through it, as they appear to move along the ecliptic. The waning gibbous moon passed through the northern portion of the Praesepe just last Saturday, Jan. 11. It will pass very close again on March 6, but be closest to the cluster before the sun sets in Tupper Lake. Unfortunately, the brightness of the gibbous moon makes the cluster very hard to see without a telescope when the moon is present.

When planets pass through it, though, it is a lovely sight. Mars will appear to pass through the cluster from June 21-24, 2021 after dazzling us with its presence throughout next winter.

The Northern Cross, appearing to stand on the western horizon in the early evening, is part of Cygnus the Swan. The brightest star in Cygnus, marking the top of the cross, is Deneb (DEN-ebb) marking the swan’s tail. The horizontal beam of the cross forms the inner portion of the swan’s wings, with the tips marked by stars beyond and above the ends of the beam. At the base of the cross is Albireo (al-BEER-ee-oh, “the beak”). This star is lovely to observe in a telescope because it’s actually two stars of contrasting blue and gold colors due to their masses and evolutionary stages. It’s not known if the two stars orbit each other or are just aligned on our line of sight. Detailed observations of each of these stars has revealed them to each have physical companions that they do orbit.

As the swan, Cygnus is winging south along the Milky Way with its equator nearly parallel to the vertical beam of the cross. It’s the last swan to leave the Adirondacks for the winter. It won’t return to our evening skies until next June … Deneb is, after all, part of the Summer Triangle. Vega, barely visible above a very low northwestern horizon in these evenings, is also in the Summer Triangle. Altair, the third member of the triangle, is about 15 below the horizon, having set just before 7 p.m.

The Praesepe is one of the delightful and lovely celestial wonders the volunteer astronomers of the Adirondack Sky Center and Observatory can show you at the Roll Off Roof Observatory (RORO) above Little Wolf Pond in Tupper Lake. We have public stargazing on the first and third Fridays of each month during the winter if it’s clear. Please check our web site at https://www.adirondackskycenter.org and our Facebook page for updates on the weather and whether we will open. You can sign up for email updates on observing and, on our public observing days you can call the RORO at 518-359-6317 to talk with one of our astronomers.