The depth of the winter sky

Figure 1: View toward the south from Tupper Lake at 8 p.m. on Dec. 31 showing galaxies in the constellations of Pisces, Cetus, Sculptor, Fornax and Eridonus. The 4 and 9.9 billion light year distant clusters of ZWCL 0024 in Pisces and JKCS 041 in Cetus are also indicated. (Provided image)

Figure 3: Hubble Space Telescope image of the JCKS 041 cluster of galaxies. The circled galaxies belong to the distant cluster. Those with no label are no longer forming stars. Those still forming stars are labeled SFG. (Provided image — Carnegie Institution for Science, 2014) 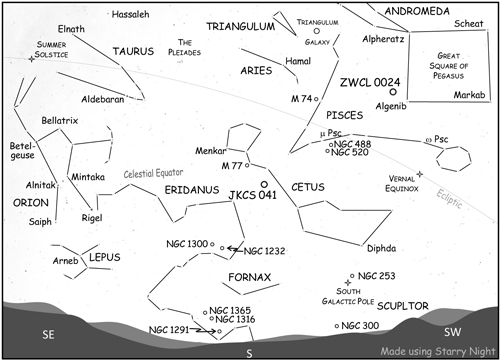 Figure 1: View toward the south from Tupper Lake at 8 p.m. on Dec. 31 showing galaxies in the constellations of Pisces, Cetus, Sculptor, Fornax and Eridonus. The 4 and 9.9 billion light year distant clusters of ZWCL 0024 in Pisces and JKCS 041 in Cetus are also indicated. (Provided image)

In this dark part of the year, a moonless sky can seem particularly deep. Part of the reason for this is the lack of bright constellations in the southern sky visible in the early evenings. There are very few bright stars between the Great Square of Pegasus and Orion. This is due to the fact that we’re looking out toward the south pole of our home galaxy, the Milky Way. So the sky IS actually deeper than at other times of year since the relatively nearby stars and nebulae of the Milky Way’s disk are not blocking our view of the deeper universe.

As shown in Figure 1, the main constellations in this region are Cetus, the sea monster and Eridanus, the river. There are a number of other galaxies visible in this region, all much fainter than the bright galaxies in Andromeda (off the top right edge of the diagram) and Triangulum. A few of these galaxies are indicated by circles and labeled with their most common name. A Google Search on any of the names will yield amazing images from telescopes around the world and in space.

In Pisces, Messier 74 (M74), the 74th “uninteresting fuzzy blur” in Charles Messier’s 1784 catalog of non-comets, is a face-on spiral galaxy. It’s known as “the phantom” because it is a challenge to spot in a small telescope due to its emission being spread out thin on the sky. South of it, M77 in Cetus is a face-on barred spiral that emits X-rays and radio waves as well as glowing in optical wavelengths.

Back in Pisces, just below and slightly right (west) of Mu Piscium (PISS-ee-um) are NGC 488 and NGC 520 at the moderate distances of 90 and 100 million light years. The names are from the New General Catalog initially compiled in 1888. NGC 488 is a very tightly-wound spiral galaxy that we see nearly face-on. NGC 520 is actually a pair of galaxies in the midst of a collision that began about 300 million years ago, when early reptiles began to roam across Earth’s super-continent, Pangea. The collision will continue for a few more hundreds of millions of years, perhaps ending as another super continent forms from our drifting continents.

Dropping down from these to the SSE horizon in the constellation of Sculptor, the south pole of the Milky Way galaxy marks the point where we’re looking straight “down” out of our home galaxy and toward the equator of our home supercluster of galaxies, Laniakea. So this view devoid of stars and nebulae is extremely rich in galaxies. A pair of fairly nearby galaxies are close to this point. NGC 300 is a face-on spiral galaxy about 6 million light years away. NGC 253, the Sculptor Galaxy, is a dusty, edge-on spiral about 8 million light years away. It’s undergoing a burst of star formation due to a recent collision with a dwarf galaxy. 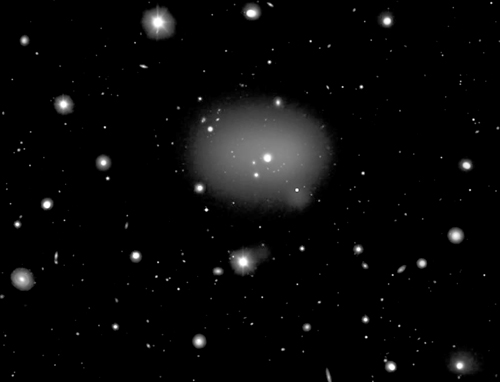 Galactic interactions and collisions are not rare. The largest galaxies result from the mergers of smaller galaxies. Two of the other three galaxies near the southern horizon in the constellations of Fornax (the furnace) and Eridanus show evidence of recent interactions. NGC 1316, Fornax A, is a nearly face-on lenticular galaxy, a disk lacking spiral arms. It shows crisscrossing dust lanes from a recent collision with NGC 1317, just to its north. NGC 1365 is a face-on barred spiral with widely-flung arms. Its nucleus contains a super-massive black hole that X-ray observations show is distorting the shape of space around itself due to its rapid rotation.

Farther north in Eridanus, NGC 1300 is another lovely face-on barred spiral galaxy. Its apparent neighbor, NGC 1232, is also face-on and is a beautiful “grand design” spiral. Images of it show the spiral arms filled with the blue glow of young stars. In 2013, the orbiting Chandra X-ray Observatory, observed a large cloud of X-ray luminous gas thought to have resulted from the interaction of NGC 1232 with some other galaxy.

X-rays are evidence of galactic interactions and collisions because the gas halos of the galaxies heated by the interactions. Since stars are nuclear explosions contained by gravity that continually blow material off their surfaces, all galaxies have halos of gas. It’s not very dense gas, having perhaps a few molecules in each cubic centimeter of space, but on cosmic scales, the compression and interaction of these halos heat the gas to the millions of degrees required for X-ray emission. Galaxy clusters, where gravitationally bound galaxies frequently collide and merge are thus characterized by X-ray emitting gas.

In 2009, X-ray emission from JKCS 041, near the center of the diagram, confirmed it to be one of the most distant clusters of galaxies ever observed, a staggering 9.9 billion light years away. The name reveals it is the 41st entry in the catalog of objects discovered using the “JKCS” technique making use of infrared spectroscopy. Figure 2 shows the Chandra X-Ray Observatory’s image of the gas overlaid on an optical image of the galaxies from the European Southern Observatory (ESO) Very Large Telescope’s image of the galaxies. In 2014, a team of researchers observed the cluster with the Hubble Space Telescope (see Figure 3) to confirm the distance. At a distance of almost 10 billion light years, the light creating those images has been traveling for twice the life of the Earth that formed about 4.5 billion years ago.

A surprising aspect of JKCS 041 is that even 9.9 billion years ago, it was a cluster of galaxies, not a proto-cluster still in the act of forming. Since the universe is 13.8 billion years old, astronomers did not expect to find a cluster that was mature only 4 billion years after the Big Bang. It means that galaxies and clusters of galaxies evolve more quickly than we had thought. These observations thus prove important in helping us understand the evolution of galaxies, including the one we call home. 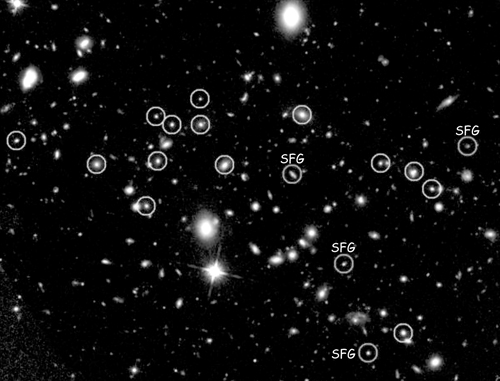 Figure 3: Hubble Space Telescope image of the JCKS 041 cluster of galaxies. The circled galaxies belong to the distant cluster. Those with no label are no longer forming stars. Those still forming stars are labeled SFG. (Provided image — Carnegie Institution for Science, 2014)

If you have a minute to pause as you walk the dog or take out the trash, have a look up at this seemingly blank southern sky and let your mind reach across the darkness to these distant structures. If the 9.9 billion light years to JKCS 041 seems too far, you can rest about half way at ZWCL 0024 shown next to the Great Square of Pegasus in Figure 1. It’s less than half way to JKCS 041 at 4 billion light years. So the light detected to create the image in Figure 3 has been traveling since Earth was in the throes of its formation and the first single-celled creatures were making their homes in her expanding oceans.

Though they can’t show you the distant clusters, the volunteer astronomers of the Adirondack Sky Center and Observatory can show you many closer galaxies as well as other celestial wonders at the Roll Off Roof Observatory (RORO) above Little Wolf Pond in Tupper Lake. We have public stargazing on the first and third Fridays of each month during the winter if it’s clear. Please check our website at https://www.adirondackskycenter.org and our Facebook page for updates on the weather and whether we will open. You can sign up for email updates on observing and, on our public observing days you can call the RORO at 518-359-6317 to talk with one of our astronomers.