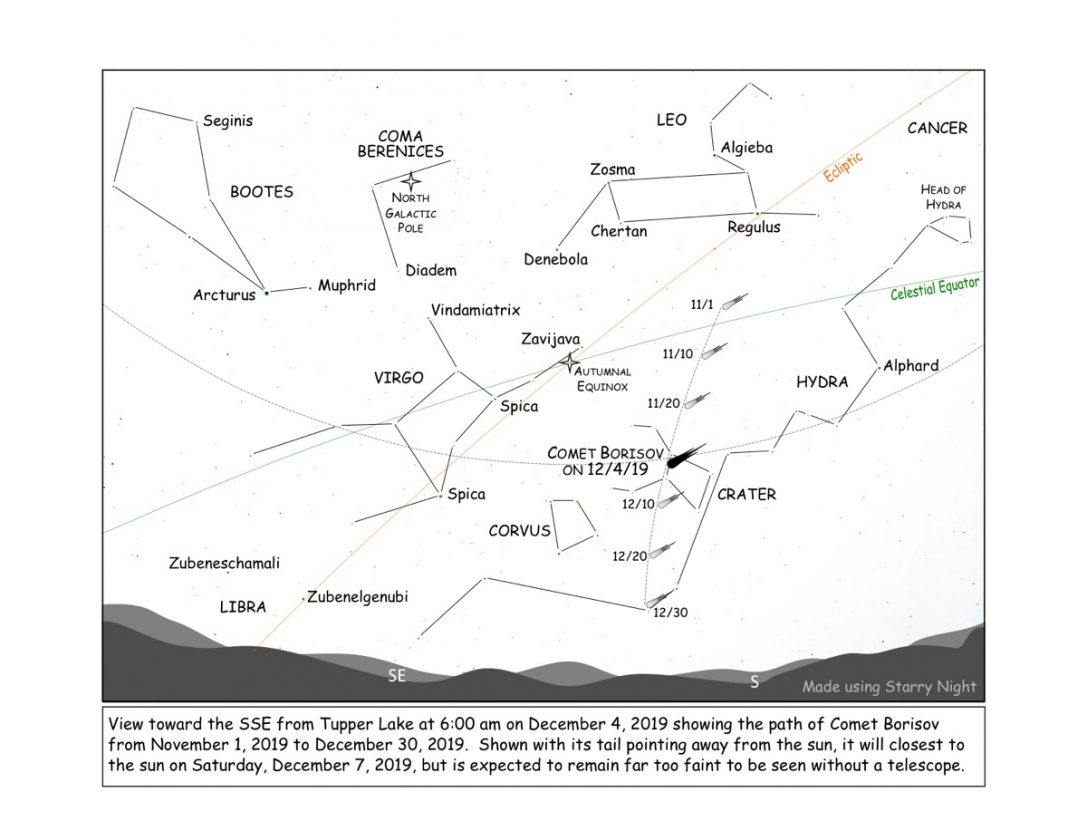 The coziest early evenings of the year are upon us.

With over 15 hours of night beginning with sunset around 4:20 p.m. and ending with sunrise around 7:30 a.m., it is no wonder we love to decorate with strings of lights. Those of us who love these long nights seem to be in the minority so as I savor them, those of you who prefer the lingering light of summer can at least take heart in the fact that this is the darkest time and the light will soon begin to return.

In Tupper Lake, the earliest sunsets will occur next Monday and Tuesday evenings at 4:18:48 p.m. (on a flat horizon), a mere 39 seconds earlier than tonight’s sunset.

After that, sunset will be getting later. The change is slow at first; sunset on Christmas Day will be five minutes later than those on Dec. 9 and 10. But the change will start getting noticeable by the end of January, even as the cold deepens. Those who prefer their light in the morning have longer to wait. This morning, the sun rose at 7:16:23 a.m. over a flat horizon in Tupper Lake. It will rise 17 minutes later on Jan. 2 and 3, at 7:33:33 a.m.

Many are surprised to learn that the earliest sunset and latest sunrise don’t occur on the shortest day, the winter solstice. This year the solstice will occur on Saturday, Dec. 21 at 11:19 p.m., giving Tupper Lake 15 hours and 9 minutes of darkness that night (21-22). But neither the latest sunrise nor the earliest sunset occur on that day because solar noon, when the sun is halfway between sunrise and sunset, occurs only 2 minutes before clock noon. On Christmas Day, solar noon occurs at almost exactly clock noon. In early December, however, solar noon occurs more than 8 minutes before clock noon, making the sun rise and set earlier than it will on the solstice.

The dark evenings do afford us extended views of the starry sky, albeit not particularly comfortable views! But even in short pauses as we hurry along on our outdoor treks, we can contemplate wonders.

This December, we have a faint comet in the morning sky that has an origin outside this solar system.

As shown in the diagram, Comet Borisov is currently in the constellation of Crater, a dim-starred constellation visible before dawn. The comet is very faint, so a fairly large aperture telescope (12″) is required to view it. The major job of telescopes is actually to gather light. The lenses or mirrors in the telescope essentially squeeze all the light that comes into its aperture down to the size of the pupil of the observer’s eye which creates a much brighter image at the eye (or the photographic or electronic detector). Any magnification of the image takes place after the image brightness has been increased in this way.

The comet was discovered on Aug. 30, 2019 by an amateur astronomer, Gennady Borisov, using a 65 cm telescope that he built himself at MARGO observatory in Crimea.

Once it was announced, many other astronomers observed it and calculations revealed that it does not belong to this solar system. If it were bound, its orbit would be an ellipse with the sun at one focus and we could calculate how distant from the sun the far end of the orbit is located. But this comet is on a hyperbolic orbit … it’s not an oval, it’s an open arc and this object is just flying through the solar system. It came from the direction of Cassiopeia, but its solar system of origin is not known. It’s only the second object we’ve positively identified as having its origin in another star system.

The first interstellar visitor we identified was Oumuamua (O-ooo-MOO-ah-MOO-ah) that was discovered on Oct. 19, 2017 by Robert Weryk using the Pan-STARRS telescope at Haleakala (HALL-ee-ah-CALL-ah), Hawaii. It was discovered after it had passed its closest point to the sun because it was a very dark object that did not show the head and tail of a comet. It seems to be a large, reddish, shiny rock between 330 and 3,300 feet long and 155 to 550 feet wide that tumbled through the solar system.

It did show some unusual motions that motivated one team to propose that it was actually a thin solar sail. However, this idea has not been supported by others. Some astronomers have noted that Oumuamua seems to be a very lightweight and “fluffy” conglomerate of ice grains and dust … a “cosmic dust bunny.”

Back to Borisov, it seems to be a comet very much like the many known solar system comets that form comas of gas and dust evaporated off their surfaces as they approach the sun and tails of the gas and dust left behind along their orbit. Even the Hubble Space Telescope image is of a fuzzy ball, but there’s always hope that at or just after its closest approach to the sun on Dec. 7, the solar heating will increase its brightness, or at least brighten enough to teach us more about its origins.

The volunteer astronomers of the Adirondack Sky Center and Observatory invite you to view stars, nebulae, galaxies, and other wonders of our universe at the Roll Off Roof Observatory (RORO) above Little Wolf Pond in Tupper Lake. We have public star-gazing on the first and third Fridays of each month during the winter if it’s clear.

Please check our website at https://www.adirondackskycenter.org and our Facebook page for updates on the weather and whether we will open. You can sign up for email updates on observing and, on our public observing days you can call the RORO at 518-359- 6317 to talk with one of our astronomers.