Dance of the evening planets 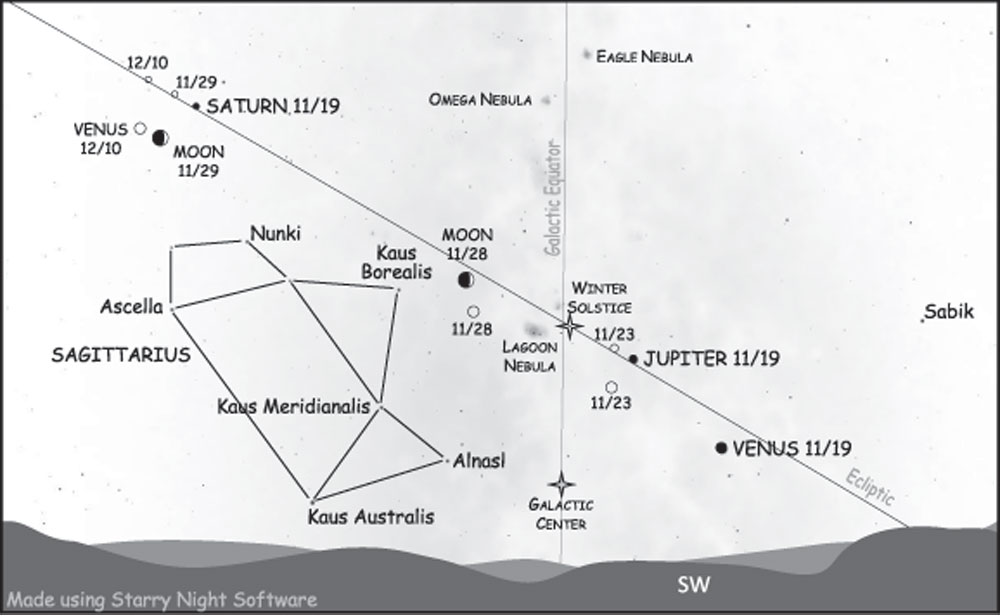 The southwestern sky seen from Tupper Lake at 5 p.m. on Nov. 19 showing Venus, Jupiter and Saturn. Venus will rise past Jupiter (on Nov. 23) and Saturn (on Dec. 10) and their positions on these days are shown, though they will be closer to the horizon than shown here. The waxing crescent moon will appear close to Venus on Nov. 28 and Saturn on Nov. 29. (Provided image)

After adorning the evening skies for most of this year, Jupiter and Saturn are moving toward the sunset horizon. In fact, Earth, in its faster orbit, is leaving them on the far side of the sun.

Over the next few weeks, we’ll get to watch these motions in real time as the planets’ positions shift each evening. As shown in the figure for tonight, Venus will only be 10 degrees (about the width of your fist held at arm’s length) above the horizon as the sun sets at 4:28 p.m. in Tupper Lake. Though low, its brightness should make it easy to spot through leafless trees. Five degrees above and left (south) of it is dimmer, but still bright, Jupiter. Saturn, dimmer than Jupiter and Venus, but shining brighter than all the nearby stars, is 20 degrees above and beyond Jupiter along the same path, the ecliptic, the plane of Earth’s orbit.

Also marked on the diagram is the position of the Winter Solstice. At 11:19 p.m. on Saturday, Dec. 21, the sun will have crawled at its 1 degree per day to this position. It is the southernmost position of the sun, giving Antarctica its maximum amount of sunlight and we northerners our maximum amount of dark. Our Gregorian calendar marks it as the first day of winter, but the Celtic (and Tibetan) calendars mark it as mid-winter day, the middle of winter that started on the day after All Hallows Eve, our Halloween. The Celts then begin spring on Feb. 2, Imbolc, our Groundhog Day.

The line of sight to the center of our galaxy is also marked on the diagram. It is fairly close to the Winter Solstice in this glittering part of the sky that is best observed by us in July and August, when it’s high well after the light of dusk has faded.

A couple of star-forming molecular (H2, molecular hydrogen) clouds, the Lagoon and Eagle nebulas, are marked, but they are far fainter and more difficult to spot in the actual sky, and only the Lagoon Nebula can be seen without a telescope.

It gives good perspective on what seem like vast distances between the worlds in our solar system to realize that there is a black hole at the center of our galaxy 30,000 light years from us. By watching stars orbit an unseen object at astounding speeds, astronomers have used Newton’s laws of motion and gravitation to determine that the black hole has a mass 4.1 million times that of the sun that will pass closest to its sky position on Dec. 18.

Back to the planets, Venus is moving away from the sun in our sky, so it will move closer to Jupiter each evening and, on Saturday evening (Nov. 23), appear about 1.3 degrees (about the width of your pinky finger held at arm’s length) below it. I hope we all have a low southwestern horizon and clear skies for this lovely appulse, the close approach of two celestial bodies. Though they appear close in our sky, Venus will be 137 million miles from us (farther from Earth than the sun since it’s on the far side), and Jupiter will be 567 million miles from us … 430 million miles from Venus. The worlds will still appear close on Sunday evening, with Venus slightly left but still below Jupiter. Night by night, then, Venus will move up and away from Jupiter On Thanksgiving evening, Nov. 28, the thin (two-day-old) waxing crescent moon will be 1 degree above Venus and 5 degrees left and above Jupiter. Only 12 degrees above the horizon when the sun sets at 4:21 p.m., it will provide a lovely sight for pre- or post-dinner walks on that holiday afternoon as the planets will become visible very shortly after sunset.

The next evening, the moon will appear about 2 degrees below Saturn as a slightly thicker crescent higher (18 degrees) above the sunset horizon.

The volunteer astronomers of the Adirondack Sky Center and Observatory invite you to view planets and other wonders of our universe at the Roll Off Roof Observatory (RORO) above Little Wolf Pond in Tupper Lake. We have public stargazing on the first and third Fridays of each month during the winter if it’s clear. Please check our website at https://www.adirondackskycenter.org and our Facebook page for updates on the weather and whether we will open. You can sign up for email updates on observing, and on our public observing days you can call the RORO at 518-359- 6317 to talk with one of our astronomers.