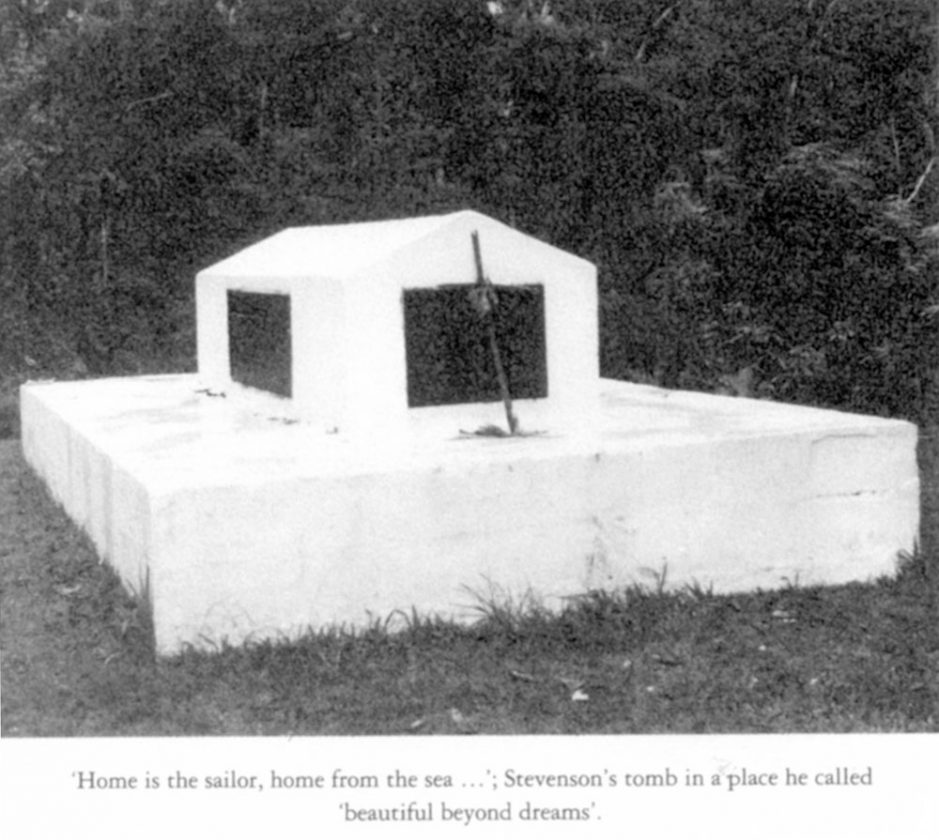 Under the wide and starry sky,

Dig the grave and let me lie,

Glad did I live and gladly die,

And I laid me down with a will.

This be the verse you grave for me:

Here he lies where he longed to be,

Home is the sailor, home from sea,

And the hunter home from the hill.

John Wayne, the “Duke,” recites the above in a World War II film, in which he plays second fiddle to Robert Montgomery and Donna Reed, called “They Were Expendable” (1944), a Hollywood tribute to the PT Boat arm of the U.S. Navy in the Pacific Theater. In the movie, Wayne is the skipper of one such vessel, and he must find words to say over the body of a fallen sailor, killed in action. Confessing to a not-so-religious background for saying something suitable, his subconscious seems to suddenly shoot up to the surface this little poem he had heard or read somewhere, sometime, by someone he couldn’t name. And that’s one more example how Robert Louis Stevenson gets himself into the movies.

“Requiem,” first published in the collection of poems called “Underwoods” (1887), came out of 608 Bush St. in San Francisco when RLS was at rock bottom, as we say. The silver lining around his black cloud was the growing promise that the divorced Fanny Osbourne would soon be Mrs. Robert Louis Stevenson. “The only question is whether I shall be alive for the ceremony,” confided Louis to his friend in England, Charles Baxter. Marriage to Fanny would enable RLS to tell his friends back home, “Told you so! You all said my trip to America was ‘an enterprise of madness’ but look at me now. So there!” But if Colvin, Henley, Gosse, Baxter, cousin Bob and the rest could have actually looked at him then, they might have been shocked.

From the age of 8, there was maybe no such thing as a full recovery for R.L. Stevenson. Following a case of scarlet fever or something like it, he was doomed to be a walking skeleton with a sunken chest that periodically coughed up blood in different amounts. When Mark Twain saw Stevenson in New York City less than a week after the latter left Saranac Lake, he said that looking at RLS sitting on a park bench in Washington Square suggested to him the image of a broad cloth draped over a sculptor’s frame. Biographers seem to be in agreement that when Louis was coughing up rent to Mrs. Carson at 608 Bush St., he came face to face with his mortality more earnestly than ever before. It would be hard to think that his recent near-death encounter in the Santa Lucia mountains had nothing to do with it. In late February 1880, Louis wrote Sidney Colvin for the 15th time since leaving Scotland:

“I am not well at all. But I hope to be better. You know I have been hawked to death these last months. … I wish I could say better, but I cannot. With a constitution like mine, you never know — tomorrow I may be carrying top gallant sails again; but just at present I am scraping along with a jury-mast and a kind of amateur rudder.”

This letter is stored at Yale University in the renowned Stevenson Library of E.J. Beinecke. Edwin Beinecke had himself been a supporting member of the Stevenson Society of America in Saranac Lake during its golden age in the 1920s. There, a complete catalogue of his collection takes up six fat volumes worth of space in the very bookcase RLS had on his desk in his little study at Baker’s. As for the letter, curators at Yale might have wondered why the last part is missing. It is because Sidney Colvin cut it out to give to the society’s museum at Baker’s. Why he did that requires guesswork because he doesn’t mention it in his correspondence. Many people think that the most plausible theory is that Colvin wanted to complement the acquisition by the Stevenson Society of the original wood-carving of “Requiem” designed by Gilett Burgess and made by L.U. Hoffman in San Francisco in 1913. It is the prototype of the bronze plaque on the author’s tomb atop Mount Vaea, halfway around the world and down under in Samoa. The portion of the letter transplanted to Baker’s reads:

Home is the sailor, home from sea,

And the hunter home from the hill.

You, who pass this grave, put aside hatred; love kindess; be all services remembered in your heart and all offences pardoned; and as you go down again among the living, let this be your question: Can I make someone happier this day before I lie down to sleep? Thus the dead man speaks to you from the dust: you will hear no more from him.

Who knows, Colvin, but I may thus be of more use when I am buried than ever while I was alive? The more I think of it, the more earnestly do I desire this. I may perhaps try to write it better some day; but that is what I want in sense. The verses are from a beayootiful poem by me. RLS