The old Pacific capital, part I 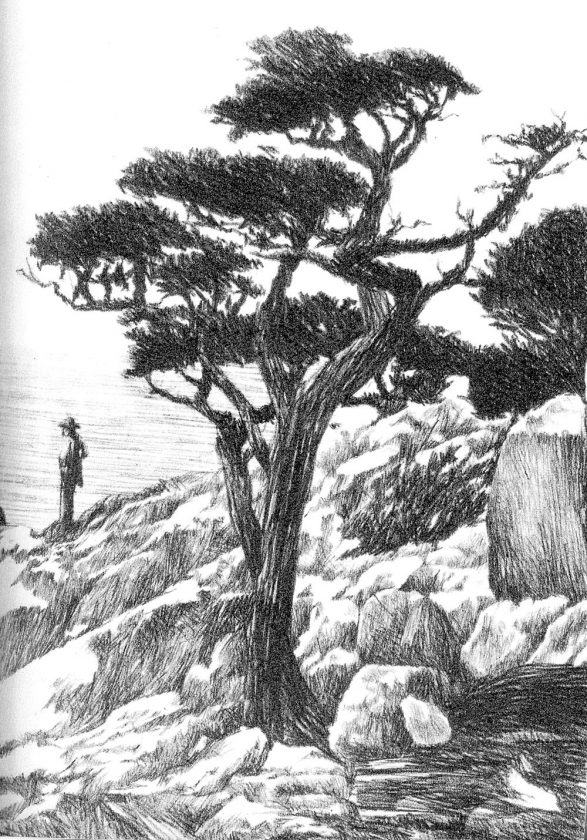 “This is a lovely place which I am growing to love. The Pacific licks all other oceans out of hand; there is no place but the Pacific Coast to hear eternal roaring surf. When I get to the top of the woods behind Monterey, I can hear the seas breaking all round over ten or twelve miles of coast from near Carmel on my left, out to Point Pinos in front, and away to the right along the sands of Monterey to the mouth of the Salinas …”

Monterey suited Robert Louis Stevenson, who became known as “the beachcomber” to its inhabitants because he spent endless hours walking the shoreline, exploring everywhere, because that’s who he was.

Monterey, as the subject of an extensive essay, could have been predicted once the convalescing writer from Scotland had settled into the old Spanish town for a spell. From his cheap, unfurnished room at the French House, today the Robert Louis Stevenson House, Louis went forth daily, unless he was feeling “seedy,” to do his sight-seeing, which seemed to always give himself something to write about — and writing was the only thing RLS had wanted to do since the age of 6.

“These long beaches are enticing to the idle man. It would be hard to find a walk more solitary and at the same time more exciting to the mind. Crowds of ducks and sea-gulls hover over the sea. Sandpipers trot in and out by troops after the retiring waves. … Strange sea-tangles, new to the European eye, the bones of whales, or sometimes a whole whale’s carcass, white with carrion-gulls and poisoning the wind, lie scattered here and there along the sands. The waves come in slowly, vast and green, curve their translucent necks, and burst with a surprising uproar, that runs, waxing and waning, up and down the long keyboard of the beach. … The interest is perpetually fresh. On no other coast that I know shall you enjoy, in calm, sunny weather, such a spectacle of Ocean’s greatness, such beauty of changing color, or such degrees of thunder in the sound. The very air is more than usually salt by this Homeric deep.

“Inshore, a tract of sand-hills borders on the beach. Here and there a lagoon, more or less brackish, attracts the birds and hunters. A rough, spotty undergrowth partially conceals the sand. The crouching hardy, live oaks flourish singly or in thickets — the kind of wood for murderers to crawl among …”

Murderers?! It’s almost as if the beachcomber knew that within two years, he would be headlong into his first novel, which would be about an imaginary island hiding something of value. No one knew it then, that Stevenson’s solitary tours of Monterey’s beaches would some day soon provide bragging rights to the community as the source of the surf and shore features of “Treasure Island,” the most famous island in fiction.

“As I pored upon my map of Treasure Island,” said RLS in his essay, “Treasure Island,” “the future characters in the book began to appear there visible among imaginary woods; and their brown faces and bright weapons peeped out upon me from unexpected quarters, as they passed to and fro, fighting and hunting treasure, on these few square inches of a flat projection.”

Woods, as in forest and trees, are one of the favorite features the cosmos had to offer to Robert Louis Stevenson, who said, “The world is so full of a number of things. I’m sure we should all be as happy as kings.” He had already written his essay about the Forest of Fontainebleau in France, in which he spoke of “the wonderful clear, pure air … this thirst for exploration … plunges you into many a deep grove, and drags you over many a stony crest. It is as if the whole wood were full of friendly voices calling you farther in …” In Saranac Lake, the “Hunter” RLS enjoyed his own private reserve on his landlord’s property, everything east of the Saranac River, at least 600 acres of it, including Baker Mountain, all once belonging to the Baker family long before the neighborhoods moved in. Stevenson mentioned the woods behind his “Hunter’s Home” in Saranac Lake several times in his letters. In one, he tells a friend, William Archer, in England, “I like myself better in the woods.”

Eight years before he came to the Adirondacks, Stevenson wrote in his Monterey essay that “all woods lure a rambler onward; but in Monterey it was the surf that particularly invited me to prolong my walks.” One day, one of those walks could have been his last when he might have accidentally ended his mortal existence in a violent and undignified manner as the victim of a lynch mob.