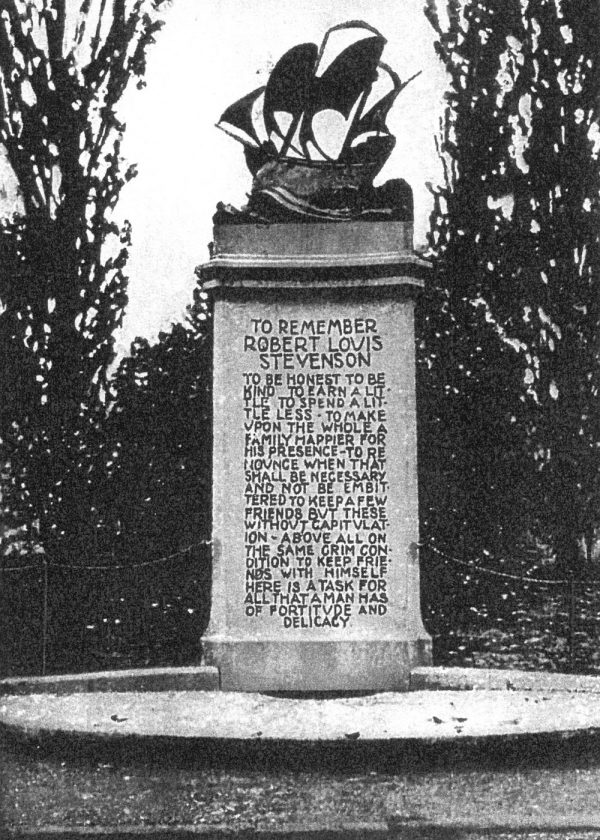 San Francisco enjoys its Stevenson connection and claims the first public monument to remember him in the world. At 13 feet tall and topped with a brass galleon in rough seas, it was dedicated on October 17, 1897, in Portsmouth Square, where RLS liked to sit in the sun. The RLS quote thereon came out of Saranac Lake in Christmas Sermon in 1887. (Provided photo)

Mrs. Fanny Osbourne had finally come to her senses. Considering that her boyfriend, Robert Louis Stevenson, had nearly died alone in the wilderness on her account had something to do with it.

In late December 1879, RLS departed Monterey for San Francisco. Fanny was already long gone, having returned to East Oakland to reoccupy the cottage with the little fence and garden, all in her name. Divorce proceedings had begun in Monterey to expedite an official end to the story of Sam and Fanny Osbourne. Sam had agreed to support Fanny in the meantime and she had agreed to delay her marriage to RLS as a matter of decorum. Too bad for Sam that he would lose his job which would force Louis, who was living across the Bay as cheaply as possible, to slash his budget even more to help Fanny. That meant helping her son, Lloyd, too, and her sister, Nellie, who was soon to marry Adolpho Sanchez, of the Bohemia saloon in Monterey. Fanny’s daughter Isobel or “Belle,” was newly wed to Joe Strong, a painter specializing in portraits. Sam had found the couple a spacious studio apartment at No. 7 New Montgomery Avenue in the Latin Quarter of old San Francisco.

“Here we lived a happy-go-lucky, jolly life, with many friends, plenty of work to do of the kind we loved, and no responsibility whatever,” remembered Belle in her book, “This Life I’ve Loved” (1937). It was Paris all over again, California style, with artists and studios everywhere. Joe and Belle with many of their friends were members of the Bohemian Club who often gathered at the Strong studio to sit around the fire, consume wine and talk like bohemians. Such a setting was a magnet for Robert Louis Stevenson while he was waiting things out in another cheap boarding house at 608 Bush St. At the Strong Studio, Louis would befriend among others, Parisian-born painter Jules Tavernier, and Virgil and Dora Williams, founders of the renowned School of Design.

“R.L.S. was not famous then,” wrote Belle in her book, “he was at the lowest ebb of health and fortune. … It was there Louis met Charley Stoddard, and heard him talk about the South Seas.” Warren Stoddard, American poet, author and globetrotter with an acute romantic streak, was a Bohemian Club member and close friend of the Strongs. He introduced Louis to the writings of Herman Melville and loaned him his copies of Omooand Typee. He also gave him a copy of his own book, “Summer Cruising in the South Seas.” RLS went more than once to Stoddard’s home atop Telegraph Hill and always marveled at his friend’s collection of exotic paraphernalia gathered during his wanderings in the Orient and greater Oceania. Leave it to Louis to have soaked up the whole scene in his head and then wait twelve years to pour it out on paper in Chapter 8 of “The Wrecker” (1892). Loudon Dodd, the main character, describes how a new acquaintance, an artist, “carried me into his apartment; where I sat presently in the midst of a museum of strange objects?paddles and battle-clubs and baskets, rough-hewn stone images, ornaments of threaded shell, cocoanut bowls, snowy cocoanut plumes?evidence and examples of another earth, another climate, another race, and another (if a ruder) culture…You have read his books. You know already how he tramped and starved, and had so fine a profit of living, in his days among the islands…you can imagine with what charm he would speak, and with what pleasure I would hear. It was in such talks that I first heard the names — first fell under the spell — of the islands.” So said the author through his character, Loudon Dodd.

Robert Louis Stevenson would leave San Francisco as a married man — “mission accomplished” — in May 1880. He could not have known then that he would return almost exactly eight years later to pick up where he had left off when he first came “under the spell of the islands” courtesy of Charley Stoddard on Telegraph Hill. The old dream would be rekindled in the glow of the fire from Andrew Baker’s fireplace in Saranac Lake in December, 1887. Sam McClure of New York, Stevenson’s second American publisher, would be the one to redirect the author’s mind back to the ultimate voyaging destination half way around the world beneath the Southern Cross. Alfred L. Donaldson did a commendable job describing the results in his “History of the Adirondacks”:

“When he was not writing he was planning the come-true of some persistent old daydreams. We know their romantic, somewhat fantastic trend. They were of yachts and aimless cruising, of southern seas and sun-kissed shores where lotus-eaters dwell, of roving life among primeval folk, and rich adventure in a vagabond’s contentment. And Saranac Lake became the gateway to all this. It shaped itself into the shadowed portal through which he issued from his winter prison into the dazzling sunshine of eternal summer.”