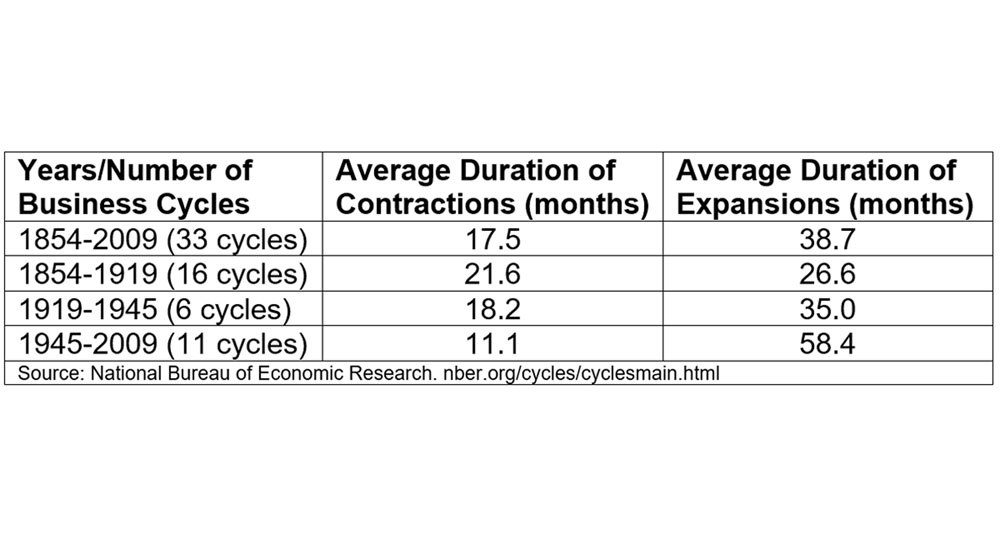 Try as they might, economists have yet to develop infallible tools to definitively predict when recessions hit. Still, one reliable predictor of future recessions is the yield curve, which is simply the difference between short-term and long-term interest rates.

Our economic policymakers have been able to tame the business cycle, although they have been unable to eliminate recessions. Odds are they never will. The business cycle consists of four phases including: (1) expansion, (2) peak, (3) contraction/recession and (4) trough. An organization of renowned economists, the National Bureau of Economic Research, decides the official starting and ending dates of recessions and expansions. Those starting and ending points coincide with economic peaks and troughs. Decades ago, NBER economists performed pioneering studies of the business cycle, so they have had the official word on when recessions begin and end.

Given their name, you might think the NBER is a government agency. Not so. Instead, “the NBER is a private, non-profit, non-partisan organization” of leading economists including numerous Nobel Prize winners in economics as well as several past chairs of the president’s Council of Economic Advisers. According to the NBER, from 1854 to 2009, the U.S. economy has experienced 33 business cycles. To the credit of our economic policymakers, the average length of recessions has been decreasing while the average length of expansions has been increasing (see table). Nevertheless, there is little, if any, hope among economists that recessions will ever be completely avoided.

Several times on Thursday (Aug. 22) and Friday (Aug. 23), the yield curve/spread between 10-year U.S. Treasury bonds and two-year bonds was inverted (negative). Consequently, there is heightened concern that a recession might now be on the horizon.

What you can do now

In their report “How to recession-proof your life,” CNBC reporters Sharon Epperson and Michelle Fox list four tips to help you prepare for a recession including:

1. Focus on what you can control.

2. Shore up your finances.

3. Get cautious about your spending.

Ironically, their advice to shore up your finances and get cautious about your spending are two behaviors that reduce consumer spending and increase the likelihood of a recession.

Like a yield sign on the highway that warns us to drive with caution, the yield curve/spread is now warning us to proceed with caution in our economic affairs.