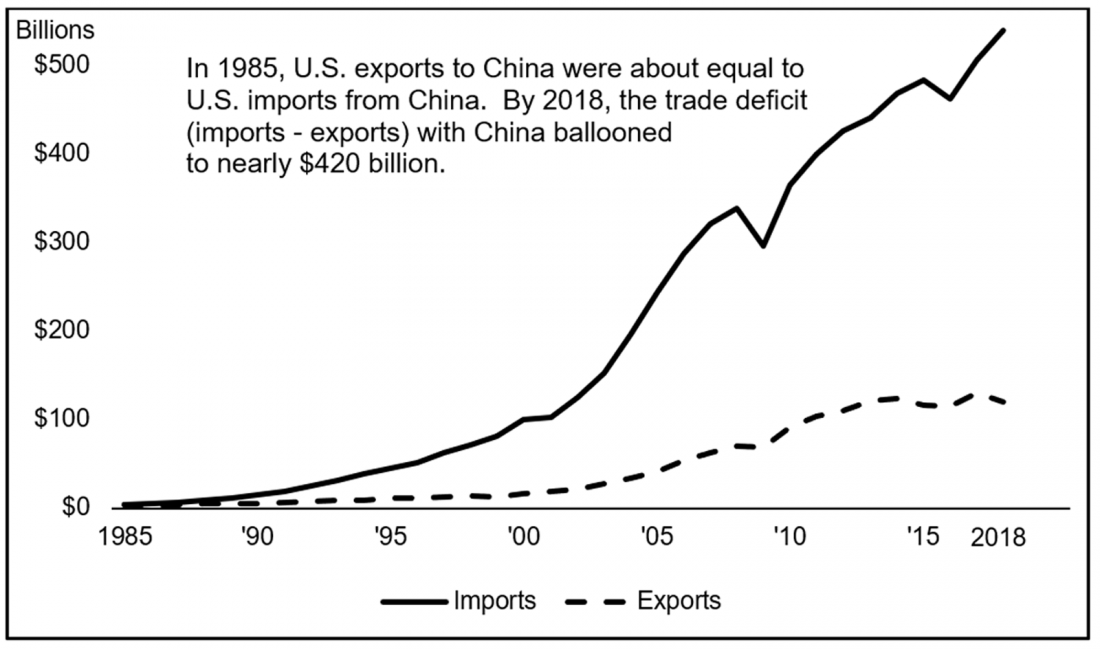 Unfortunately, consumers, who are the ones most affected by tariffs, are likely to find all this talk quite monotonous because tariffs are invisible taxes. As consumers, we don’t write out checks (or make electronic transfers) for tariffs like we do to the U.S. Treasury for our income taxes or to our villages or towns for local property taxes. Instead, tariffs are passed on to consumers in the form of higher prices.

Last week we heard about how President Trump and China’s President Xi Jinping decided to call a truce in the U.S.-China trade war. They called for a truce while at this year’s G-20 Summit, an annual meeting where 19 countries and the European Union consider global issues ranging from economics to the environment. The truce is good news for consumers, but don’t get your hopes up. Last year, they did the same. As noted in a recent report by the Commission on the Theft of American Intellectual Property, “At (last year’s) G-20 Summit in Buenos Aires in December 2018, President Trump and President Xi agreed to work toward a pathway for resolving trade disputes and announced a 90-day truce on raising tariffs. The two leaders stated they would ‘immediately begin negotiations on structural changes with respect to forced technology transfer, intellectual property protection, non-tariff barriers, cyber intrusions and cyber theft, services, and agriculture.'” Sounds like deja vu all over again!

Over the last year of so, our president has imposed tariffs as a way to combat the theft of trade secrets and intellectual property, and to reduce the U.S. trade deficit with China. The stealing of trade secrets is nothing new. What is new, though, is the unprecedented level and manner in which that theft occurs.

When it comes to stealing trade secrets, the U.S. and early U.S. industrialists were deft at theft. According to the article “The U.S. complains that others steal its technology, but America was once a tech pirate itself,” by the Public Radio International reporter Christopher Woolf, the first secretary of the United States Treasury Alexander “Hamilton used patents to lure immigrants with skills and knowledge to move to the United States. George Parkinson, for example, was awarded a patent in 1791 for a textile spinning machine, which was really just a rip-off of a machine he had used in England. The United States also paid his family’s expenses to emigrate and relocate to the U.S.” Another fascinating example of early American industrial espionage is the story of Francis Cabot Lowell and his Boston Manufacturing Company. Again, according to Woolf, “In 1810, Massachusetts businessman Francis Cabot Lowell visited England and spent his time trying to figure out how the Brits had managed to automate the process of weaving cloth. He charmed his way into factories and attempted to memorize what he saw.” Lowell needed to memorize what he saw because he wanted to steal trade secrets of the British textile industry. According to the article “Francis Cabot Lowell, brief life of an American entrepreneur: 1775-1817” by Dan Yaeger, former executive director of the Charles River Museum of Industry and Innovation in Waltham, Massachusetts, “One obstacle to his (Lowell’s) incipient plan, however, was Britain’s tight control of its advanced textile industry. To protect trade secrets, the technologies were not for sale, and British textile workers were prohibited from leaving the country.”

The stealing of trade secrets is not new, but the level and manner in which China steals trade secrets is unprecedented. According to a 2017 report by the bipartisan, independent Commission on the Theft of Intellectual Property (IP Commission), “The theft of American intellectual property remains a systemic threat to the U.S. economy, inflicting an estimated cost that exceeds $225 billion in counterfeit goods, pirated software, and theft of trade secrets and could be as high as $600 billion annually.” The IP Commission’s 2019 review, an update on progress in the fight on theft of intellectual property, includes several recommendations for fighting theft of IP, although they do not recommend tariffs.

Tariffs are not the solution

Tariffs are not the solution to preventing the theft of IP, nor are the they a solution to our ballooning trade deficit with China (see chart). According to the article “What’s Behind the U.S. Trade Deficit,” Federal Reserve economist Yi Wen and research associate Brian Reinhold found two reasons for persistent U.S. trade deficits, including “The rise of the U.S. dollar as an international reserve currency and a shift in comparative advantage in manufacturing are key economic changes driving the large U.S. trade deficit.” The article also lists “three likely outcomes from an extended trade conflict with China, none of which are likely to increase U.S. exports and reduce its trade deficits,” including:

3. U.S. exports to China becoming more expensive as a result of China’s retaliation.

It’s time to stop punishing consumers for the theft of IP and for economic shifts beyond their control.