2017 tax cut promises were pie in the sky 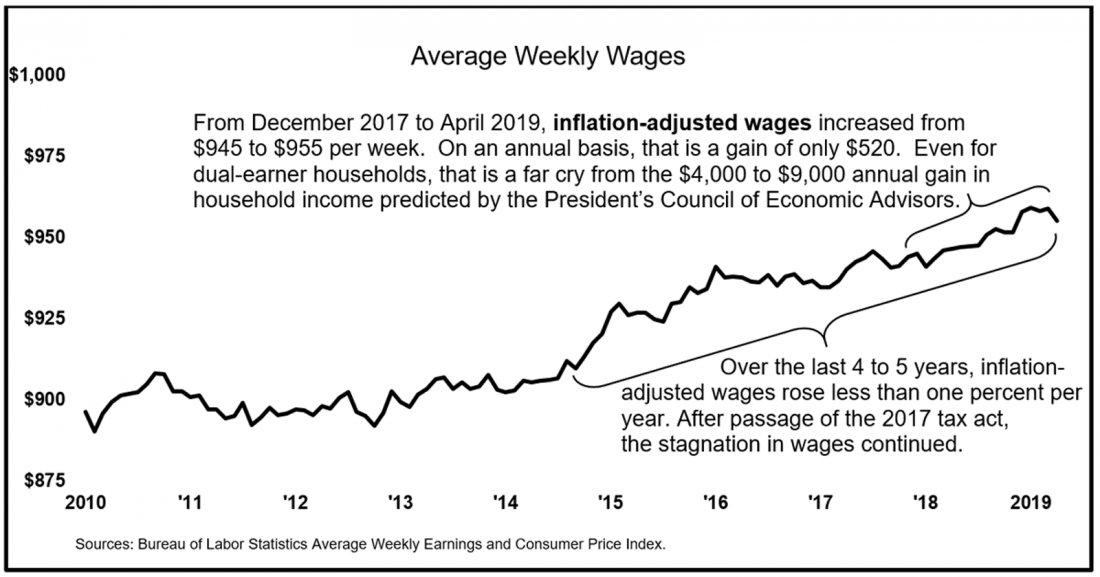 A couple of weeks ago, the Congressional Research Service published a report that shows the 2017 Tax Cuts and Jobs Act has provided few, if any, benefits for the U.S. economy.

The CRS report, “The Economic Effects of the 2017 Tax Revision: Preliminary Observations,” debunks many of the outlandish contentions made by the president and the president’s economic advisors when they were trying to convince Congress and the American people that cutting taxes, especially corporate taxes, would solve the problem of wage stagnation. In a previous report created to justify slashing corporate taxes, the president’s Council of Economic Advisors noted “wage growth in America has stagnated. Over the past eight years, the real median wage in the U.S. rose by an average of six-tenths of a percent per year. But even as Americans’ real wages stagnated, real corporate profits soared, increasing by an average of 11 percent per year.” What? Wait. Real corporate profits have soared, and real wages of average Americans have stagnated, so corporate taxes should have been cut (which they were) in order to increase the real (inflation-adjusted) wages of average American households — does that make sense to you? Me, neither. It has, however, made a lot of dollars and cents for higher-income households. The recent CRS report debunked several contentions of the CEA’s misleading “Corporate Tax Reform and Wages: Theory and Evidence” report including contentions that the tax cut would pay for itself, the trend in wage growth would accelerate, and corporate investment would soar.

Tax cuts are not paying for themselves

Time and again, the president’s economic advisors, including Treasury Secretary Mnuchin, CEA Chairman Kevin Hassett and Director of the United States National Economic Council Larry Kudlow, said the tax cuts would pay for themselves. They predicted tax revenues would rise if tax rates were cut. Apparently they believed lower tax rates would provide a powerful incentive for corporations to invest in new plants, equipment and the like, which would boost economic output to the point where tax revenues would more than offset the reduction in tax rates. At current tax rates, nothing could be further from the truth. According the CRS report, “the data appear to indicate that not enough growth occurred in the first year (2018) to cause the tax cut to pay for itself.” The report notes the tax cuts likely increased 2018 output/gross domestic product by a paltry 0.3%, which was “5% or less of the growth needed to fully offset the revenue loss from the Act.”

Simply put, for the tax cuts to have paid for themselves, the increase in economic output attributable to the tax cuts would have had to be 20 times larger. The CRS also noted that “in 2018, gross domestic product grew at 2.9%, about the Congressional Budget Office’s projected rate published in 2017 before the tax cut. On the whole, the growth effects tend to show a relatively small (if any) first-year effect on the economy.”

Wages are not growing as claimed

Another outlandish projection made by the president’s CEA, which was repeated over and over by the president, was that household income would increase by up to $9,000 per year as a result of the tax cuts. The CEA’s report said conservative estimates “imply an increase in average household income of $4,000 and more moderate estimates show increases of $9,000.” Note: Those were estimates for before-tax income, not after-tax income. In sharp contrast, the CRS’s report found “no indication of a surge in wages in 2018, either compared to history or relative to GDP growth.” Wage data from the Department of Labor’s Bureau of Labor Statistics shows little change in the growth of wages over the last 10 years as well as after the passage of the 2017 tax act. As shown in the chart, from December 2017, when the 2017 Tax Cuts and Jobs Act took effect, to April 2019, inflation-adjusted wages have increased by only about $10 per week or $520 per year. Even for dual-earner households, that is a far cry from the $4,000 to $9,000 annual gain in household income predicted by the president’s CEA.

Corporations could use their tax windfalls in a variety of ways. As noted in the CRS report, those uses include “investment, paying down debt, increasing wages, paying wage bonuses, paying dividends, or repurchasing shares.” A very small share of the corporate tax cuts appears to have been spent on increasing wages or paying worker bonuses. The CRS report says, “one organization (Americans for Tax Fairness) that tracks these bonuses has reported a total of $4.4 billion. With U.S. employment of 157 million, this amount is $28 per worker.” The Americans for Tax Fairness also tracks the value of stock buybacks since the Tax Cuts and Jobs Act was enacted. To date, they estimate the value of stock buybacks at more than $1.1 trillion. As posted on their “Stock Buybacks” web page, “buybacks mostly enrich the already wealthy, including CEOs, because rich people own most corporate stock: the wealthiest 10% of American households own 84% of all shares, the top 1% own 40%. About one-half of households own no stock.”

While touting the 2017 Tax Cuts and Jobs Act, the president has often referred to the tax cuts as “rocket fuel” for the economy. The recent CRS report found the tax cuts certainly were not economic rocket fuel, but it did find the president’s CEA report included unrealistic, misleading, pie-in-sky economic projections.