Jupiter, Saturn, and the Milky Way 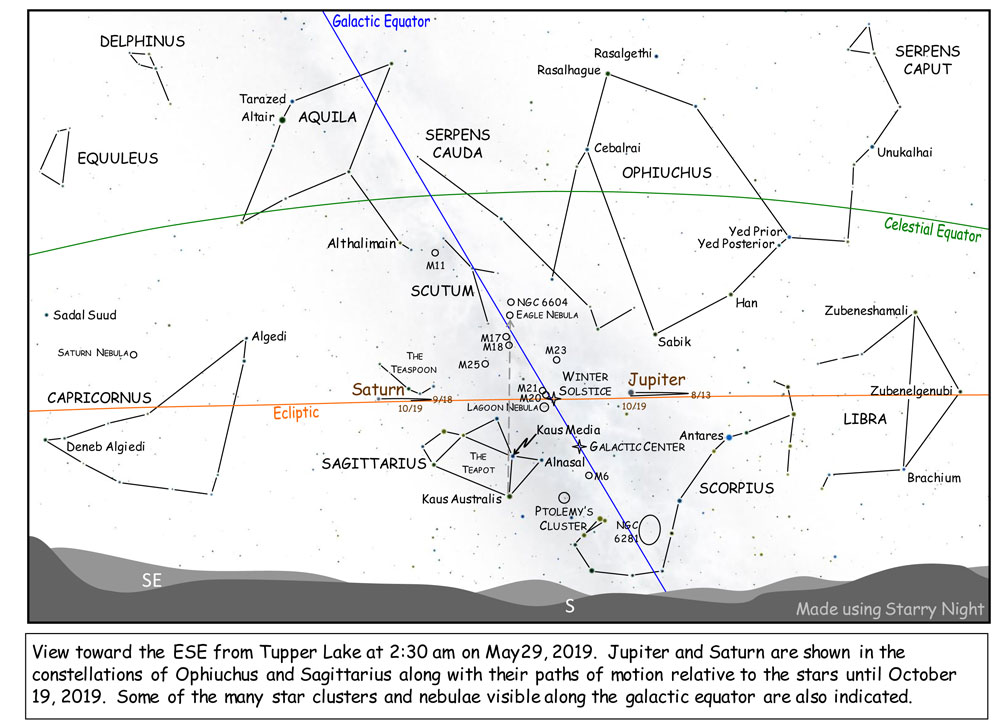 Once again, the relentless orbit of the tilted Earth is nodding the northern hemisphere toward the sun, shortening the nights, and ending this column until the lengthening hours of darkness next November.

But there’s much to view in our summer skies, however short the hours of darkness. So let me give you a guide for the warm nights of July as Jupiter and Saturn dance in retrograde loops. They are located in Ophiuchus and Sagittarius, bracketing the richest star fields in the northern hemisphere near the center of the Milky Way Galaxy.

The figure shows the view to the south southeast from Tupper Lake at 2:30 a.m. tomorrow. Each day, however, that view will occur four minutes earlier, or an hour earlier every 15 days. Thus, by July 6 this will be the view at midnight. By Aug. 4, it will be seen at 10 pm, 8 p.m. by Sept. 4, and by Oct. 18 it will occur in twilight at 5 pm. This gives all of us (and the insects buzzing about us on warm summer nights) ample time to observe this rich region of our sky.

Jupiter is, by far, the brightest object in the region, shining almost three times brighter than reddish Antares, the fourth brightest star in this part of the sky (after Arcturus, Vega, and Altair). As shown on the diagram, it appears between Scorpius and Sagittarius in the part of the constellation, Ophiuchus, that hangs down across the ecliptic, the annual path of the sun. Because the ecliptic now passes through Ophiuchus, as it did not when the Mesopotamians first defined the Zodiac, there is no Sign of Ophiuchus! Instead, people born when the sun is actually in Ophiuchus have been classified as Sagittarians. Some astrology groups are beginning to include the 13th sign, but it remains controversial. Perhaps the presence of the mighty planet Jupiter in Ophiuchus will spur some decisions!

Saturn is east of Jupiter in Sagittarius. Though dimmer than Jupiter, Saturn is still about twice as bright as Antares and much brighter than the stars just above it in the Teaspoon. This is one of two asterisms in Sagittarius, the other is the Teapot below and left of it.

Both planets are currently in retrograde motion, moving westward with respect to the stars as Earth, on its smaller, faster orbit, is catching up to pass them on the cosmic racetrack of the solar system. We’ll pass Jupiter on June 10 and see it opposite the sun in the sky in a configuration known as opposition, when it is closest and brightest. On that day, it will be 398 million miles from Earth, making this the best time to view it through binoculars. Even standard binoculars should reveal its four largest moons, the Galilean Moons first observed by Galileo in late 1609. Spotting them may require steadying the binoculars on a tripod or car roof. Sky and Telescope Magazine hosts a page showing their positions relative to Jupiter and each other for any date and time so you can identify which is which (https://www.skyandtelescope.com/wp-content/observing-tools/jupiter_moons/jupiter.html). The names we use were chosen by Simon Marius, a German astronomer who discovered them at about the same time. Galileo had initially named them after his patrons, the Medicis. Though tiny dots of light in our sky, each of these moons is a world as large (Io and Europa) or larger (Ganymede and Callisto) than Earth’s moon, Luna.

Saturn will be at opposition on July 18 at a distance of 840 million miles. A telescope is required to resolve the rings that appeared as “ears” to Galileo. In that telescopic view, its moon Titan will appear near it. This amazing world is the largest moon in the solar system with an atmospheric pressure on its surface 1.5 times Earth’s (about the pressure at the bottom of a 16-foot pool). With the sun a billion miles away, the surface is at -290 degrees F. Methane becomes a liquid at -259 degrees F and is abundant on Titan as a gas (warming the surface due to the greenhouse effect), a liquid, and a solid just as water is present on Earth. The Huygens spacecraft that landed on Titan in 2005 sent back images of water ice boulders that had been rounded by tumbling in liquid methane flowing to a nearby methane lake discovered in images made by the Cassini spacecraft that explored the Saturnian system for 13 years, plunging into the planet’s atmosphere on Sept. 15, 2017.

After we pass the planets and start leaving them behind, both will appear to stop, then resume moving eastward with respect to the stars. Jupiter will do this on August 13 and Saturn on September 18. By Oct. 19, Jupiter will have returned to its current position, but Saturn will still be west of tonight’s position.

After enjoying views of the planets and moons with binoculars or telescope, turn your attention and instrument to the starry sky between the giant worlds. About one third of the way along the line from Kaus Media to Antares is the line of sight to the center of the Milky Way galaxy. A black hole 4.6 million times the mass of the sun lurks there, 30,000 light years away in the heart of our spiral galaxy. Astronomers have detected its presence and measured its mass by using radio telescopes to observe stars in orbits around it. In this region of the sky are many glittering star clusters and nebulae providing delightful sights to the eye only enhanced by optical instruments.

The observers of the Adirondack Sky Center invite you to view the planets, star clusters, nebulae, and galaxies of the summer sky through our telescopes at the Roll Off Roof Observatory (RORO), open to the public every Friday approximately one half-hour after sunset. Please come to learn the stars and constellations and view through our telescopes at the Wilderness Above. For updates and notices, check out our website at adirondackpublicobservatory.org and our Facebook page. On our public observing days you can also call the RORO at 518-359-6317 to talk with one of our astronomers.