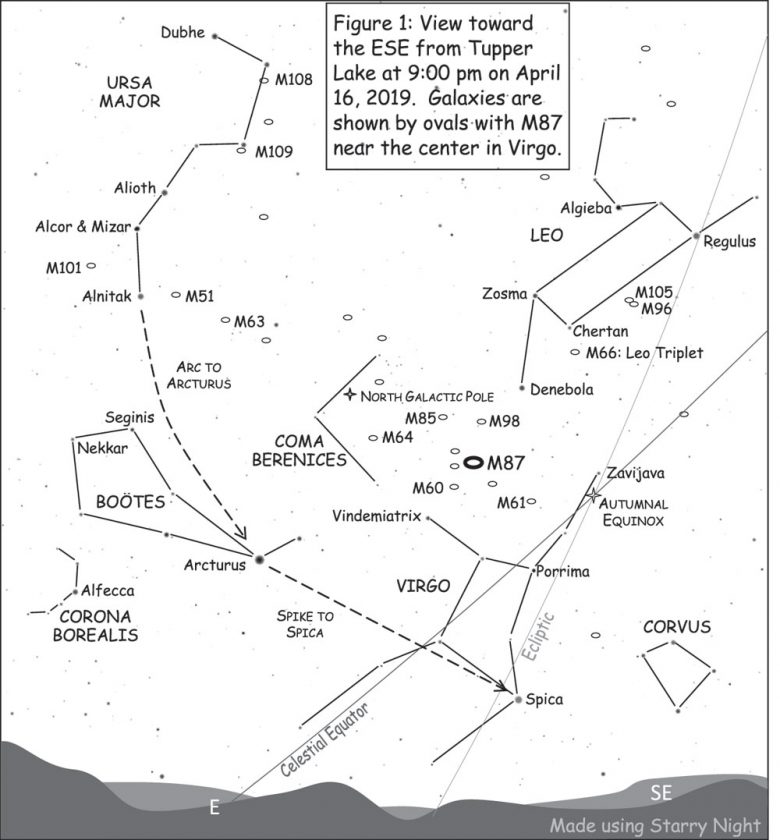 The amazing image of the black hole in the center of the giant galaxy M87 has been hard to miss over the past week. The image is a stunning achievement of astronomical inquiry, technology and persistence.

M87 is the largest and second brightest galaxy in the Virgo Cluster of galaxies. As shown in Figure 1, it’s visible in our evening sky between the stick figures of Leo and Virgo. This region is rich with galaxies, a few of which are indicated by ovals on the figure. Charles Messier, a French astronomer, is credited with discovering M87 and is responsible for its name. In 1781, he added it as the 87th uninteresting fuzzy blur on his list of objects that other observers should not mistake for the comets they were busy hunting. He noted other galaxies in the region that are also labeled with their Messier number in the diagram, though he called them nebulae. The English astronomers, William, Caroline, and John Herschel, also noted the richness of this region of the sky. Alexander von Humboldt, a Prussian geographer, explorer and naturalist, commented that the one-eighth of the sky around Virgo was home to a third of the then known nebulae.

A century ago, in 1918, the American astronomer Heber Curtis, viewing M87 from Lick Observatory above San Jose, California, noted a straight ray appearing to be connected to the nucleus. In Figure 2, Adam Block’s optical image from Mt. Lemmon shows the jet Curtis observed.

I first learned of this galaxy as a graduate student in the 1980’s. My advisor, Frazer Owen (NRAO) has used the Very Large Array radio telescope in New Mexico to image its radio emission at different frequencies and resolutions. Google “M87 Owen” to see his (and others’) images at different scales. 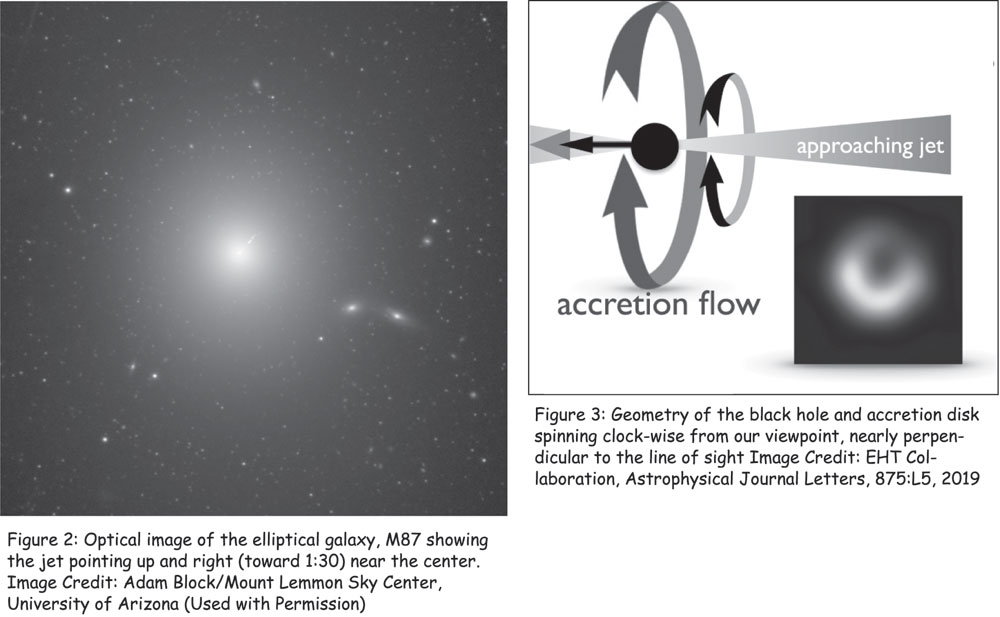 The emission we detect in radio frequencies is due to electrons caught in magnetic fields and is called synchrotron radiation. Magnetic fields deflect the paths of charged particles. Thus particles moving thorough a magnetic field spiral along the magnetic field lines rather than streaming past them. Particles in the Earth’s magnetic field do the same thing, which is why auroral displays are confined to regions near the magnetic poles. In order to follow a spiral path, the particles have to accelerate toward the center. On an icy curve, if your tires lose traction, your path becomes straight off the road instead of curving with it. When charges accelerate, they radiate and this is the emission we observe with radio telescopes. This is a lower frequency, lower energy radiation than visible light. The images made by Owen and other astronomers using radio telescopes, the Hubble Space Telescope, and X-ray telescopes clearly showed the source of the extended radio emission was a jet emanating from the center of the giant galaxy. Since the radio emission billows out over 100,000 light years from the center, the source of the glowing plasma (ionized gas) has to be extremely powerful, and yet our deepest observations showed only an unresolved dot. Only a black hole could create such powerful emissions from such a tiny volume.

Supermassive black holes are thought to reside in the centers of most, if not all, galaxies. The Milky Way’s central black hole in Sagittarius. Its mass, measured by observing the extremely fast speeds of stars orbiting it, is about 4.1 million times the mass of the sun. The one in the center of M87 is over 7 billion times the mass of the sun! This puts its event horizon, the radius at which the speed needed to escape the gravity of the black hole is equal to the speed of light, at 120 times the Earth-sun distance!

As material falls in toward the black hole due to its huge gravitational attraction, a rotational plane develops creating an accretion disk, where material spirals in toward the event horizon. The disks are actually more like donuts creating narrow funnels along the rotation axis. As it falls in, the material heats up and atoms have electrons stripped off making it a plasma of charged particles. Just like an electromagnet, these orbiting charged particles create a very powerful magnetic field that twists into spirals along the rotational axis. Some of the infalling material is forced out of the center along the rotational axes by the intense heat, density, and magnetic field creating the well-columnated jets seen emanating from the heart of M87.

Figure 3 is an image from one of the research papers released by the team. The EHT scientists tested a variety of simulations of accretion disks to discern the geometry behind the image. Since the particles in the accretion disk are moving at nearly the speed of light, their radiation is strongly beamed in the direction they are moving due to effects explained by the Theory of Relativity. The fact that the portion of the accretion disk seen below the black hole is brighter than the top informed the astronomers that the disk has a clockwise rotation as seen from Earth, though it is seen close to edge on. Thus the jet first glimpsed by Curtis in 1918 is now known to be pointed slightly toward us as ionized material is shot out from the accretion disk by heat, pressure and magnetic fields.

And we learned all this by simply observing this galaxy for centuries with telescopes of increasing size and complexity from a tiny planet 55 million light years away. I hope you can pause on the next clear, dark evening to ponder this as you look below and right of the lovely Coma Berenices star cluster to the spot where M87’s black hole lurks.

The observers of the Adirondack Sky Center invite you to view M87 and other galaxies of the Virgo and Coma clusters, as well as celestial delights within our own galaxy through our telescopes at the Roll Off Roof Observatory (RORO). We are open to the public on the first and third Fridays of each month approximately one half-hour after sunset. Please come to learn the stars and constellations and view through our telescopes at the Wilderness Above. For updates and notices, check out our website at adirondackpublicobservatory.org and our Facebook page. On our public observing days you can also call the RORO at 518-359-6317 to talk with one of our astronomers.