Mars and Uranus in the evening sky 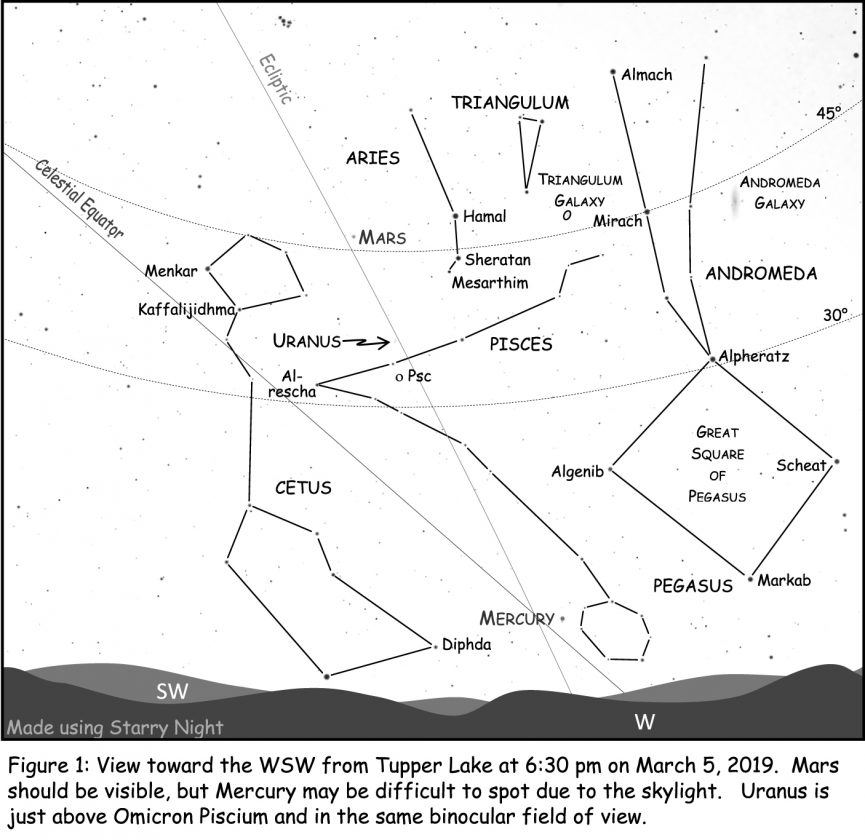 Though Mercury is sinking rapidly in the evening sky, Mars will linger through July as Earth slowly leaves it on the far side of the sun. Another planet currently in the evening sky is Uranus. It can be seen without optical aid, but it’s best to find it in binoculars, then look at the exact position to spot Uranus without them.

As shown in Figure 1, Mars will be 46 degrees above the horizon at 6:30 tonight as the sky darkens. It will be brighter than the stars of Aries to its right, but they provide a confirmation of Mars’s position. They also provide a guide to much fainter Uranus 12 degrees lower than Mars. Extending the line from Sheratan (SHARE-a-tawn) to Mesarthim (mess-ARE-tim) 8 degrees (your fist at arm’s length spans about 10 degrees) will guide you to 54 Ceti (SET-tee) and Uranus. The star and planet are about the same brightness and only an eighth of a degree apart, with the planet lower. The zoomed view in Figure 2 also includes a circle representing a typical 7×35 binocular field of view (about 7 degrees). As Mesarthim goes off the top right of the binocular field of view, 54 Ceti and Uranus should appear in the bottom left. It may be easier to put Omicron Piscium (PISC-ee-um, with a silent “C”) in the bottom of the binocular field and Uranus should appear near the center. Though the diagrams are shown for 6:30 p.m., it may take until after 7 p.m. or even 7:30 for the sky to be dark enough to clearly see Uranus and 54 Ceti.

Though these two objects are close in our sky, they are very far apart and our view of the cosmic wilderness above is always enriched with deeper knowledge of what we see. 54 Ceti is also known as HR 0534 or Hip 8588 from the Harvard Revised Photometry Catalog and the Hipparcos Catalogue of the European Space Agency’s satellite of that name. The satellite operated from 1989 to 1992 measuring the brightnesses and positions of stars. The star positions were measured multiple times in different months of the year to view them from different points in Earth’s orbit. This allowed measurements of distances by parallax, the apparent motion of a near object relative to the distant background due to motion of the observer. Most of us discover parallax as bored children in school, looking at a pencil in front of us with one eye then the other to see how far it appears to move!) The distance to 54 Ceti was measured to be about 137 light years. Given that a light year, the distance light traveling at 186,000 miles per second travels in a year is 5.9 trillion miles. Thus, this star shining as bright as Uranus is 800 trillion miles away!

This star is 20 percent to 80 percent larger than the sun with a surface about 1,000 degrees hotter. It is traveling with the Ursa Major Moving Group, thought to be a “sibling” group of stars that formed from the same cosmic cloud about 300 million years ago. The stars of the Big Dipper are also part of this group.

The planet competing in brightness with 54 Ceti, is a mere 1.9 billion miles away. The star is thus 420,000 times more distant than Uranus. And yet they appear nearly the same to us. Realizations like this spark deep gratitude in me for the generations of astronomers taking careful measurements through the centuries. They’ve given us knowledge our ancestors could only dream of. Staring at these two different objects in the same binocular field can give me chills. 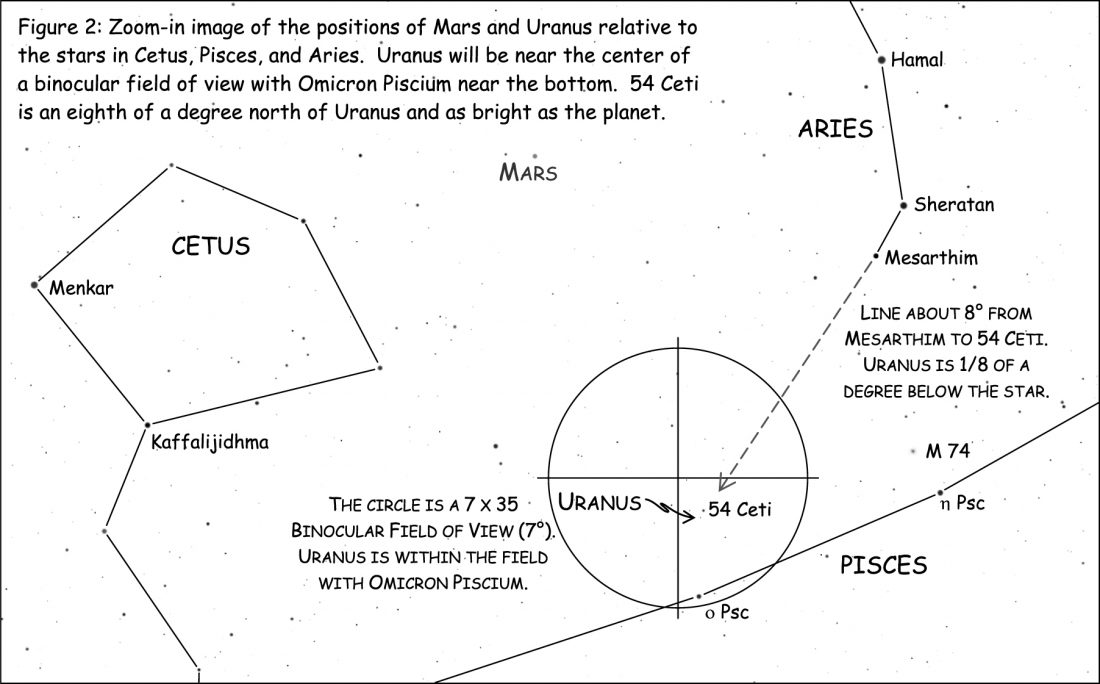 Since Voyager 2 first sent us images of Uranus in 1986, we have learned much about this distant world. It and Neptune are about four times larger than Earth in radius, 20 and 30 times farther from the sun, respectively, and now categorized as “ice giants.” Jupiter and Saturn, the “gas giants” of the solar system, are composed primarily of hydrogen in its molecular (H2) and metallic forms where it’s dense enough to act like an electrical conductor with electrons free to move as they are in our household copper wires. Uranus and Neptune, on the other hand, have outer atmospheres where helium and methane gas are mixed with hydrogen. The methane gas absorbs red light (it’s a greenhouse gas on Earth), but scatters blue to give these two worlds blueish hues that distinguish them from the browns of Jupiter and Saturn (due to ammonia compounds). Below the outer atmospheres, the ice giants have mantles of water, ammonia and methane ices instead of metallic hydrogen. There is evidence that the inner cores of the planets are composed of rock and ice.

The oddest thing about Uranus, though, is its seasons. Unlike the other planets with rotation axes somewhat perpendicular to their orbits (Earth’s is 23.5 degrees from perpendicular), Uranus’ axis is almost parallel to its orbital plane, with its north pole 7.77 degrees below (south of) its orbit. This makes its seasons extreme over the course of its 84-year orbital period. When Voyager 2 flew by it in 1986, it was near the northern summer solstice with the north pole pointed at the sun. This put most of the northern hemisphere in constant daylight and the southern in constant darkness. In 2007, it was at the autumnal equinox giving every portion of the planet equal amounts of daylight and darkness over the 17.25 hour day. At summer solstice, the atmosphere appeared nearly featureless to Voyager. In subsequent monitoring, it has been seen to become active near the equinoxes as the sun’s heat gets distributed across the planet through winds and storms. In 2028, Uranus will be at its southern summer solstice and astronomers are already watching the formation of a polar cap due to the steady sunlight near the southern pole. As announced on Feb. 7, 2019 (https://solarsystem.nasa.gov/news/839), astronomers are also watching a bright, compact methane cloud on the edge of the cap that also seems to be a response to the season, but is not yet understood.

The observers of the Adirondack Sky Center invite you to view Mars and Uranus through our telescopes at the Roll Off Roof Observatory (RORO). We are open to the public on the first and third Fridays of each month approximately one half-hour after sunset. Please come to learn the stars and constellations and view through our telescopes at the Wilderness Above. For updates and notices, check out our website at adirondackpublicobservatory.org and our Facebook page. On our public observing days you can also call the RORO at 518-359-6317 to talk with one of our astronomers.