Mercury in the evening sky 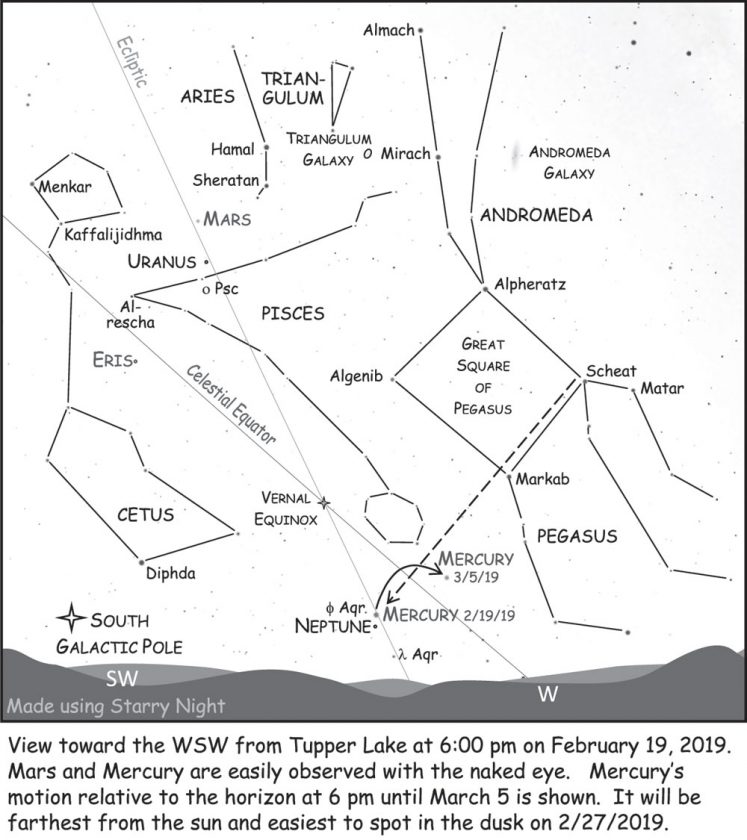 Mercury is an elusive planet. Though it is visible in the evening sky about three times each year, many people never get a glimpse at this world because they don’t know when to look for it. This month gives us all a chance to spot it just as the evenings darken.

The diagram shows the west northwestern sky at 6 pm tonight as viewed from Tupper Lake. Pegasus, the winged horse, is galloping nose-first toward the horizon, pulling the cornucopia of Andromeda behind it like a flying tail. Mercury can be found by using the Great Square that represents the body of the horse. The line of the western (right) two stars of the square, upper Scheat (SHE-ought) and Markab (MAR-cobb) can be used as a rough pointer to locate Mercury near Phi Aquarii (uh-QARE-ee-ee) and above Lambda Aquarii. Mercury will be much brighter than any of the stars in the area.

Less than 1.5 degrees south of Mercury is the even more elusive Neptune, that can only be seen with a telescope, and not when it’s as close to the sun as it is now. Though aligned in our sky, these worlds are separated by almost 2.8 billion miles! Mercury’s orbit is 40 percent the size of Earth’s. Even near the far side of the sun, it’s only 104 million miles from Earth. Neptune’s orbit, however, is 30 times the size of Earth’s so it’s 2.8 billion miles away.

As well as being closest to the sun, Mercury’s orbit is much more eccentric, or less circular than Earth’s. Mercury’s perihelion, the point where it’s closest to the sun, is at a distance of 29 million miles. At the greatest distance, aphelion, it’s 43 million miles from the sun. That’s a 41 percent variation in distance … Earth’s variation is a mere 3 percent. This causes tidal forces to stretch and compress Mercury due to the difference in the sun’s gravitational pull on the near and far side of the planet. The variation of the moon’s gravitational pull on Earth’s near and far sides is the major cause of our tides, but the sun also contributes. Though we observe the tides primarily on the oceans, the land and atmosphere also experience the tidal pulls. On Mercury, the tidal forces are about 17 times stronger than they are here on Earth.

These tidal forces, and the extent to which they vary as Mercury moves closer and farther from the sun, have locked Mercury’s day to its year. Mercury turns on its axis three times for every two revolutions around the sun, making its day two-thirds of its year. If Earth were the same, the first day of the year would last until August! Another complication of the eccentricity of Mercury’s orbit is that its orbital speed also varies by 41 percent. Earth’s variation in speed gives us this short month of February as we zoomed through perihelion on January 3, 2019 at over 67,700 mph and will coast through aphelion on July 4 at less than 65,500 mph. The variation on Mercury has a m much stronger effect.

As we observe the sun from Earth, we see two simultaneous motions. First is the rotational motion, the day. We see the sun rise in the east and set in the west each day. Tupper Lake moves around the axis of the Earth at 747 mph to give us the westward daily motion of the sun. At the same time, due to Earth’s orbital motion, the sun moves eastward along the ecliptic through the constellations of the zodiac. Today, the sun is in Aquarius, but will move into Pisces on March 12 and pass the Vernal Equinox on March 20. The average orbital speed of 66,600 mph is a much faster motion than our daily 747 mph, but the sun is so distant that it’s a much slower motion on the sky … it moves about 1 degree eastward in the annual motion for every 360 degrees westward in the daily motion. A way to visualize this is to recognize that, due to Earth’s orbital motion, our “midnight window” on the stars moves about 1 degree to the east each night. Tonight, Aquarius is setting at sunset (so it’s aligned with the sun), next month, Pisces will be setting at sunset (and aligned with the sun).

On Mercury, the fact that its day and year are so closely coupled complicates these motions. In fact, near perihelion, the annual, eastward, motion of the sun is actually faster than the daily, westward motion of the sun! At the place where solar noon occurs at perihelion, the sun, in its daily motion from east to west, actually stops and move backs to the east for a few Earth days! This happens at every perihelion, but two different places on Mercury experience it because each year is 1.5 days. Thus each spot has noon at perihelion one year and midnight at perihelion the next year. It’s thinking about motions like these that make my students’ heads hurt!

More detailed observations of Mercury’s rotation done between 2002 and 2006 revealed another interesting fact about this world. It has a liquid core. Just as a raw egg spins differently than a hard-boiled egg, planets with liquid cores rotate differently than those with solid cores. Astronomers sent radio waves at Mercury from the Arecibo (Puerto Rico) and Goldstone (California) telescopes and received them simultaneously at the Green Bank (West Virginia) and Goldstone telescopes that are separated by 2,000 miles. Comparing the times at which each telescope detected different surface features (patterns of radio reflections), a team led by Jean-Luc Margot of Cornell University was able to determine with 95 percent certainty that Mercury does have a liquid core. It has since been confirmed by other measurements. This may explain why this tiny planet, only 40 percent of Earth’s diameter, has a planet-wide magnetic field about 1 percent the strength of Earth’s. Ours is generated by motions of ions in the liquid iron-nickel outer core. Thus the liquid core on Mercury may explain its field. The fact that it is a tiny world with an interior that should be quite cold leads scientists to postulate that its core is made of iron mixed with a compound such as sulfur that would lower the temperature at which it became solid.

We learned much about Mercury from NASA’s MESSENGER (MErcury Surface, Space ENvironment, GEochemistry and Ranging) mission that orbited it between 2011 and 2015. It discovered water present as a gas and solid, organic compounds, and more evidence of the liquid core. It also produced beautiful, detailed images and maps of the entire surface. In 2025, BepiColombo, a joint mission of the European Space Agency (ESA) and Japan Aerospace Exploration Agency (JAXO) will arrive at Mercury to further study its gravitational and magnetic fields to characterize the solid and liquid iron core, and its thin “exosphere” where gas molecules are temporarily bound by the planet’s gravity instead of permanently bound in an atmosphere.

There’s still much for us to learn of Earth’s innermost neighbor, so I hope you can find a few minutes to pause and view this tiny bright spot in the sunset sky.

The observers of the Adirondack Sky Center invite you to view Mercury, Mars, and Uranus through our telescopes at the Roll Off Roof Observatory (RORO). We are open to the public on the first and third Fridays of each month approximately one half-hour after sunset. Please come to learn the stars and constellations and view through our telescopes at the Wilderness Above. For updates and notices, check out our website at adirondackpublicobservatory.org and our Facebook page. On our public observing days you can also call the RORO at 518-359-6317 to talk with one of our astronomers.