Watching out for Ultima Thule 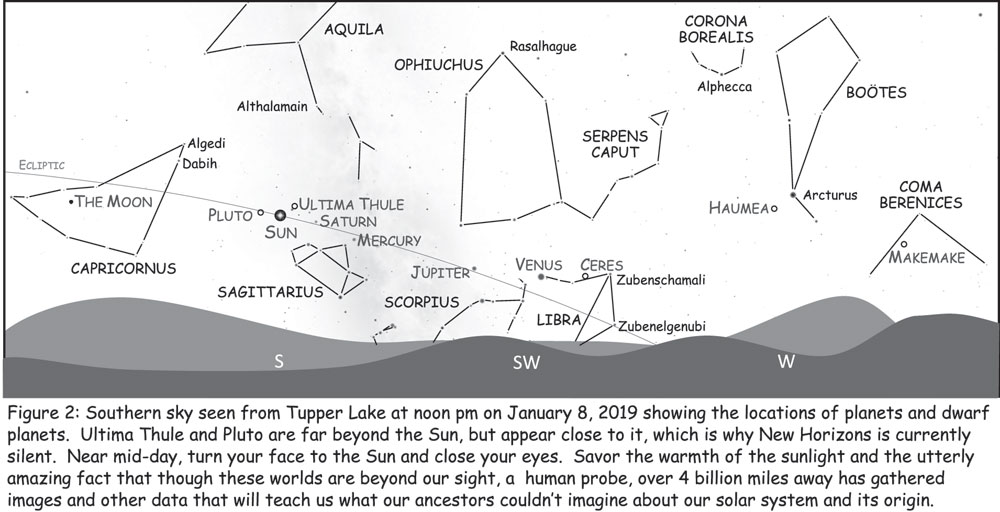 Last week the news was filled with discussion and images from NASA’s New Horizon’s flyby of Ultima Thule (TOOL-ey), the most distant world yet visited by a human instrument. On Jan. 1, 2019, New Horizons passed this tiny object over 4 billion miles from Earth, coming to within a distance of 2,200 miles of its surface at a speed of more than 32,000 mph. The highest resolution image yet released is shown in Figure 1.

Ultima Thule was discovered in June 2014 by astronomers using the Hubble Space Telescope. It was designated 2014 MU69, indicating it was the 1,745th object catalogued in the second half of June. NASA conducted a public campaign for a nickname, and Ultima Thule (Farthest Thule, “beyond the known world”), suggested by 40 members of the public, became the name on March 13, 2018. At Ultima Thule’s distance, transmissions from New Horizons take over six hours to reach Earth where they are received by antennas of NASA’s Deep Space Network in California, Spain, and Australia. The antenna featured in the 2000 Australian movie, “The Dish,” is a part of this network. This distribution of sites allows NASA to continuously monitor transmissions from solar system spacecraft as Earth rotates.

Transmissions from New Horizons were stopped on Jan. 4 and will resume on January 10 as New Horizons is on the far side of the Sun and its weak signals would be nearly lost in the radio “glare” of the Sun (due to radio frequency interference … RFI). This means that New Horizons is in our daytime sky, as shown in Figure 2, a view of the southern sky visible from Tupper Lake at noon today. Once data transmissions begin again, it will take 20 months to download all the data of the flyby to Earth. Thus we’ll multiple have years of new and exciting information about this distant world being received and analyzed.

Ultima Thule was found by astronomers searching for Kuiper (KYPE-er) Belt objects with the Hubble Space Telescope. This is an annulus of small bodies thought to be remnants of the formation of the solar system stretching away from the orbit of Neptune (30 times farther from the Sun than Earth or 30 AU) to about 50 AU. It is named for astronomer Gerard Kuiper who speculated in 1951 that more solar system objects existed near and beyond the orbit of Pluto at about 40 AU. These are small, icy worlds, such as Pluto, that is only 20 percent the size and 40 percent the density of Earth. The ices are made of ammonia and methane as well as water. At 40 AU, the Sun is 1,600 times fainter than it is at Earth, so this is a very cold region (about -223 degrees C). Initially, only Pluto was known in this belt, but in 2005, Eris, thought to be slightly larger than Pluto, was discovered. This made astronomers question tiny Pluto’s designation as a planet. As more Kuiper Belt objects were discovered, they seemed to be different sorts of worlds than the eight other planets. In 2006, the International Astronomical Union (IAU) designated some of these small worlds in the Kuiper and Asteroid Belts dwarf planets. By 2008, five dwarf planets had been designated. Pluto, Ceres (SEAR-ease, an asteroid less than half the size of Pluto recently explored by NASA’s Dawn spacecraft), then Eris, Makemake (MA-kay-MA-key) and Haumea (how-MAY-uh) in the Kuiper Belt. All but Eris are shown are Figure 2 and are currently on the far side of the Sun.

A few astronomers, some of my friends, and students still rankle at the “demotion” of Pluto! However, I see it as a promotion as now Pluto is among the largest Dwarf Planets instead of being the tiniest planet. And they do seem to be a very different class of objects than the planets. Granted, Mercury is only about twice the size of Pluto, but it’s primarily metal with a rocky crust more like Venus, Earth, and Mars that icy Pluto is. So I agree with the change in definition and defend it in my classroom and wherever else I’m challenged about it as a member of the IAU. 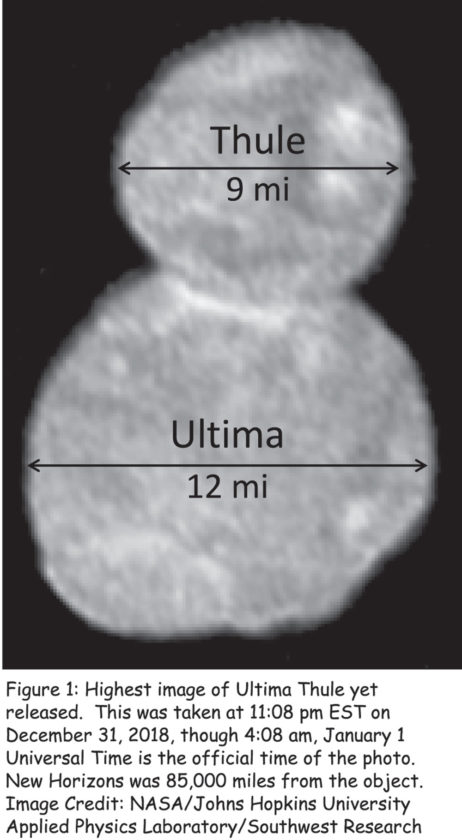 With the Hubble Space telescope, and advances in ground-based telescopes, people have been hunting for more Kuiper Belt objects. The timely discovery of Utima Thule and its position relative to Pluto made it a target for Far Horizons since it required a minimum power expenditure to steer the spacecraft past it.

In 2017, we discovered the double lobe nature of Ultima Thule as it “occulted” or passed in front of three distant stars. Multiple telescopes on Earth observed the dimming of the star and were able to discern the rough shapes and sizes of the lobes. The larger lobe, 12 miles in diameter, has now been dubbed “Ultima” and the smaller, 9 miles in diameter, is Thule. It was not known until the flyby if the lobes were firmly connected. They are, and they rotate about an axis though the larger lobe near the neck, perpendicular to the line connecting them. It’s thought that this is a “planetesimal” that coalesced due to mutual gravitational attraction. In the inner solar system, this process continued to form larger and larger objects resulting in the planets. Jupiter’s tides continuously disrupted the process in the asteroid belt, rendering it an annulus consisting of smaller objects such as Ceres, Vesta, and Ida with its tiny moon, Dactyl.

It’s a very exciting time in solar system astronomy with space probes exploring multiple worlds. As we move deeper in to 2019, our lives will be enriched with new images and facts from distant worlds, including this one, “beyond the known world.”

The observers of the Adirondack Public Observatory can’t show you Ultima Thule, but we can share our excitement at the astounding things we’re learning about them. There are many other worlds and celestial object to be explored at our Roll Off Roof Observatory, open to the public on the first and third Fridays of each month approximately one half-hour after sunset. Please come to learn the stars and constellations and view through our telescopes at the Wilderness Above. For updates and notices, check out our website at adirondackpublicobservatory.org and our Facebook page. On our public observing days you can also call the RORO at 518-359-6317 to talk with one of our astronomers.