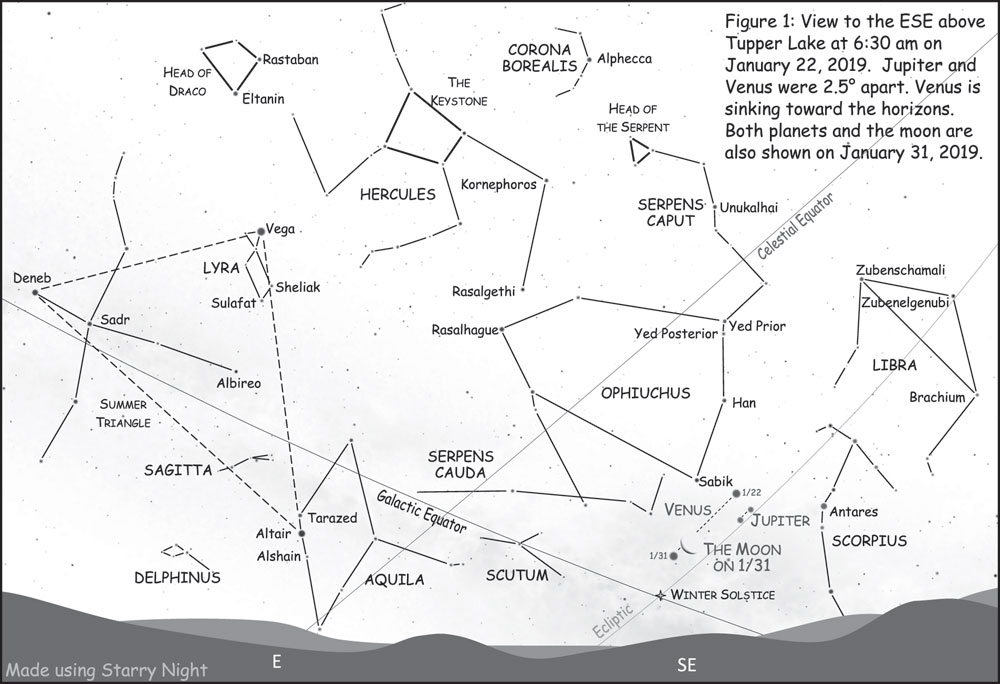 After crossing between Earth and the sun on Oct. 26, 2018 it rose into the pre-dawn skies and has been a bright beacon for all who get a view of the eastern sky before sunrise. Jupiter was on far side of the sun on Nov. 25, 2018, and Mercury was between Earth and the sun on Nov. 27. These planets then joined Venus in the morning sky. Mercury, on its very fast orbit (a Mercurian year is only 88 days!), zipped rapidly above the dawn horizon to its “greatest elongation,” the greatest angular distance from the sun, on Dec. 15. It then plunged a bit more slowly back toward the horizon, passing within a degree of Jupiter rising slowly in the days before Christmas. All while Venus remained high and dazzlingly bright.

Through January, Venus has slowly begun sinking back toward the horizon as its orbit carries it toward the far side of the sun and Jupiter has continued its slow rise. The distance between these worlds has been slowly shrinking. As shown in Figure 1, they were separated by a mere 2.4 degrees, about the width of two fingers at arm’s length. this morning. Their separation will grow again as shown by the dashed lines showing their motion relative to the stars. Both are moving eastward in our sky due to their orbital motion and Earth’s. The sun, too, moves eastward at about 1 degree per day in order to move 360 degrees in the 365 days of the year (of course, it’s Earth that moves!). In that solar year, Jupiter will move about 1/12 of the way around the sky since its year is 12 Earth years. I remember this because it’s about one constellation of the Zodiac each year. Since the constellations on of the Zodiac vary in width, this isn’t quite true, but it’s a handy mnemonic for keeping track of this giant world. Venus’ year is about 7.5 months, so it moves much more quickly in our sky as the diagram shows. The planets’ positions on Jan. 31, 2019 are also shown along with the waning crescent moon that will join them on that morning. Let’s hope the current forecast for partly cloudy holds so we can enjoy this lovely sight.

It’s important to keep in mind that the sky is three-dimensional, not the two-dimensional ceiling it appears. As shown in Figure 2, Jupiter is a great deal farther from Earth than is Venus! Finding distances to celestial objects is among astronomers’ most challenging tasks. Within the solar system, radar and space probes have helped us determine distances to extreme accuracy. In fact, the distance to the moon is constantly measured by reflecting laser beams from devices left by the Apollo missions (retroreflectors). So the positions and motions of the planet are known precisely, as indicated by our ability to send New Horizons to photograph Ultima Thule (The Wilderness Above, Jan. 8)!

Planets move counterclockwise on their orbits as seen from above the north pole (this, in fact is the definition of geographic north). The alignment of Venus and Jupiter in our sky is simply due to our viewpoint. In fact, they’re separated by 481 million miles!

But that will only be for an instant, at noon today, as all the planets continuously move on their orbits. Venus, on a smaller, faster orbit, is slowly leaving Earth behind as it moves toward the far side of the sun on August 14. It is a slow process, so we’ll continue to be able to enjoy it in the morning sky well into summer, though it will be closer to the horizon and less bright than it has been. Earth, in a smaller, faster orbit than Jupiter, will catch up to the giant planet to pass it on June 10 in an event known as opposition. This is when the planet is opposite the sun in our sky and rises at sunset. After that, through the summer, Jupiter will be bright in the evening skies, still near the bright red star, Antares in Scorpius.

As for the other planets, Mercury that had been visible in December and January, will pass behind the Sun on Jan. 30, then appear in the evening sky for February and the first half of March. It should be easily seen in the western sky after sunset in mid- and late February. Mars is still high in the southern sky at sunset as it moves through Pisces. It’s just southeast (below and left) of the Great Square. Earth is getting ahead of it just as Venus is getting ahead of Earth. Each evening, it’s a little farther west as Earth leaves it behind on the cosmic track of the solar system. It will take all summer, but on September 2, Mars will be on the opposite side of the Sun (conjunction). Saturn was on the far side of the sun on Jan. 2, 2019, so it is also in the morning sky, but still too close to the sun to be easily visible. This morning it was only 8 degrees above the horizon at sunrise. Like, Jupiter, it is rising in the morning sky and will pass Venus on Feb. 18. The planets will be 16 degrees above the horizon at sunrise (10 degrees is about the width of your fist at arm’s length) and separated by only 1 degree, the width of your pinky finger at arm’s length. Though close in our sky, Saturn will 908 million miles farther away from us than Venus. Earth is catching up to Saturn as it catches up to Jupiter and will pass between it and the sun on July 9. Late summer and early autumn evenings will then be graced by the two largest planets in our solar system high in our southern sky.

The observers of the Adirondack Sky Center invite you to view Mars and many cosmic wonders through our telescopes at the Roll Off Roof Observatory, open to the public on the first and third Fridays of each month approximately one half-hour after sunset. Please come to learn the stars and constellations and view through our telescopes at the Wilderness Above. For updates and notices, check out our website at adirondackpublicobservatory.org and our Facebook page. On our public observing days you can also call the RORO at 518-359-6317 to talk with one of our astronomers.