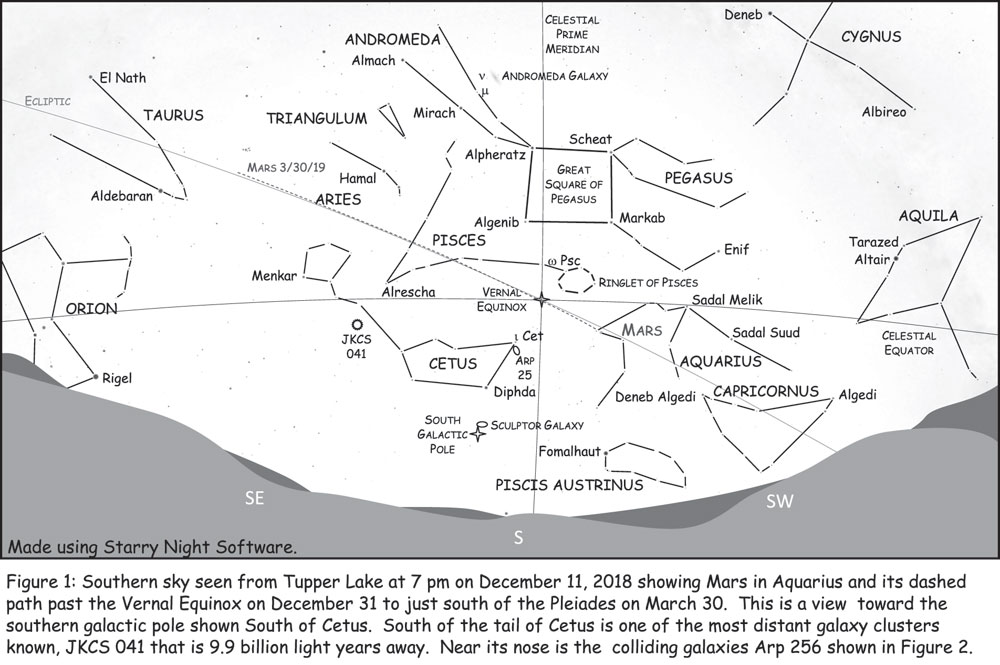 The early darkness of December evenings allows us to view a portion of the sky nearly devoid of bright stars. The Milky Way galaxy arcs overhead from Aquila low in the western sky through Cassiopeia near the zenith to Orion rising in the east. Thus when we look to the southern horizon, as shown in the diagram, we’re looking toward the south pole of our galaxy, a disk of about 300 billion stars along with clouds of gas and dust.

The disk is about 100,000 light years across, though it is challenging to determine its extent from our position within the disk. When we look along the disk of the Milky Way, there are numerous bright stars and nebulae. Most of the familiar bright stars and constellations lie along the Milky Way because that’s where most of the galactic material is. The thickness of the galactic disk is only about 2,000 light years. So when we look out of the disk, as we do when we look at the southern horizon in early December, there are many fewer stars and nebulae, allowing us to see beyond our own galaxy to other galaxies, galaxy clusters, and galaxy superclusters.

The galaxy in Andromeda is the easiest other galaxy to see. Most of us can detect a “fuzzy blur” with our unaided eye, but even modest binoculars will show it to be a large blur of stars. Telescope images reveal it to be a large spiral galaxy with attendant dwarf galaxies. Currently, it is thought to be about twice as massive as the Milky Way with upwards of a trillion stars, but shining across 2.5 million light years of intergalactic space makes it faint in our sky. We’re actually falling toward it, or more, Andromeda and the Milky Way are on their way to a collision in about 4 billion years. In galactic collisions, it is the atmospheres that collide, not individual stars. The atmospheres are the gaseous halos of gas from which stars form and to which they return at the ends of their lives. We’ve imaged many galaxies undergoing collisions and mergers. Figure 2 is an image of Arp 256, from Arp’s Catalog of Peculiar Galaxies. It is just south of Iota Ceti that I see as the nose of the Sea Monster Cetus, but 350 million light years more distant that the stars in our galaxy. Both galaxies already show distortions from the other’s gravitational attraction. Also, the gases in their spiral arms being distorted and disrupted are erupting in star formation.

Another galaxy with star formation going on at a furious rate, a “starburst” galaxy, is located nearly along the line of site to the galactic pole; the Sculptor galaxy. A quick Google search will yield Hubble Space Telescope images of what appears as a rather disorganized spiral with may dark veins of dust. Studies indicate that the star formation and dust are due to a collision with a gas-rich dwarf galaxy about 200 million years ago.

The dominant stellar asterism of the southern sky these nights is the Great Square of Pegasus made up of three stars of the constellation of Pegasus; Scheat (SHE-ought, top west), Markab (bottom west), and Algenib (all-JEN-ebb, bottom east). The fourth star, Alpheratz (ALL-fur-oughts), is the brightest star in the constellation of Andromeda. Appearing more as a cornucopia than a young woman chained to a rock waiting to be devoured by Cetus the sea monster, Andromeda arcs north and east away from the Great Square. To find the Andromeda Galaxy, follow the bottom of the cornucopia from Alpheratz to Mirach (MEER-rock) then across the cornucopia to Mu (μ) Andromedae and up a bit farther to Nu (ν) Andromedae to find the galaxy to Nu’s west. 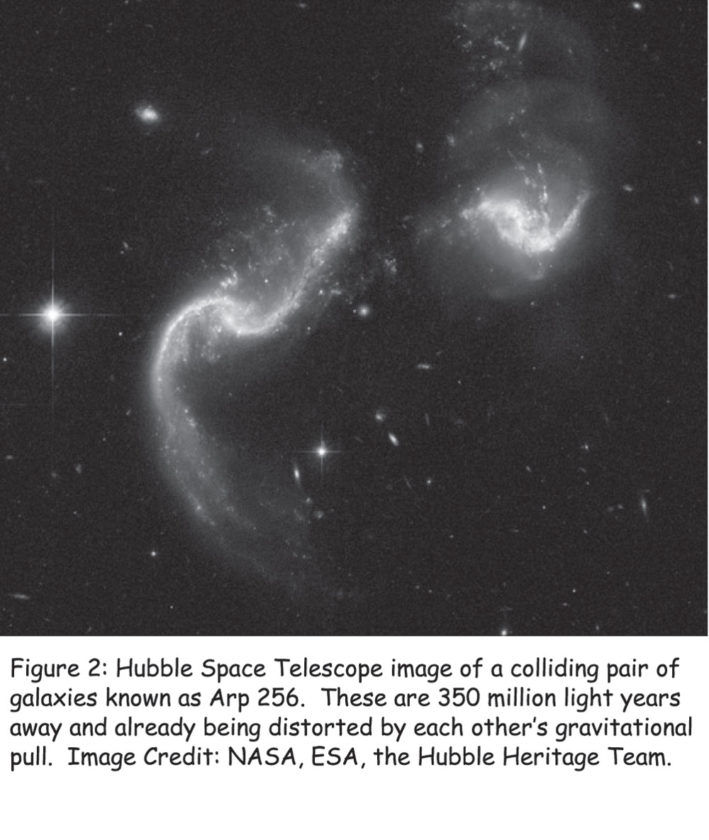 Below and east (left) of the Great Square is the first of the watery constellations, Pisces, the fish. It’s actually two fish tied together with a rope tied around each of their tails. The ancients had amazing imaginations to see this in the few dim stars of Pisces! For me, the Ringlet below the square is the easiest part of Pisces to spot. From there I can follow the arc down to Alrescha (all-RESH-uh) then up to the east side of the Great Square. The most important quality of Pisces for us is that the Vernal Equinox, the position of the Sun on the first day of spring, lurks just east and south of the Ringlet. To find it, make a line from the bottom of the Great Square through Omega (ω) Piscium about another 2/3’s of that distance.

On Dec. 31, Mars will mark the Vernal Equinox. It’s currently in the next watery constellation, Aquarius, the waterbearer. Tonight it will be just west of Phi Aquarii, but it’s moving fairly rapidly to the east. The dashed line nearly parallel to the Celestial Equator shows its motion between now and the end of March. Keep an eye on Mars as it moves beneath the Ringlet and lift a toast to it on New Year’s Eve for marking the spot that we all rejoice at having the Sun occupy!

There’s no good mnemonic stick figure for Aquarius so I generally just point out the area it occupies to my students and perhaps point out Sadal Melik (saw-doll MEL-ick) and the slightly dimmer Sadal Suud (SUE-ood), the “Lucky Stars of the Kingdom” with Sadal Suud the luckiest of them all! Just below Aquarius and much easier to make out, is Capricornus, the mer-goat with the tail of a fish and head of a goat. Moving back to the east, bright Fomalhaut (FOAM-a-lot, the first frog) is in Piscis Austrinus, the southern fish. Just east of Aquarius and south of Pisces is Cetus, the Sea Monster. It is very difficult to pick out as most of the stars are quite faint. One exception is Diphda (DEEF-duh, the second frog) that can be used with Fomalhaut to locate the Galactic South Pole, and Menkar (men-KAR), that often helps me to locate Alrescha.

The lack of bright stars as well as clouds of gas and dust belonging to our galaxy in this area affords us a view to the most distant reaches of our universe. The north-south aligned rope of Pisces nearly points at the region where the Galaxy Cluster JKCS 041 is found. In 2009 this was the most distant galaxy cluster known at 9.9 billion light years. It has since been superseded by a cluster 11 billion light years away. Only the most powerful telescopes can reveal its member galaxies, but just knowing it’s there at such a vast distance helps me get just a little closer to comprehending the vast size of our universe.

The observers of the Adirondack Public Observatory invite you to enjoy viewing Mars, the Andromeda galaxy and other wonders of the cosmos at our Roll Off Roof Observatory (RORO) that is open to the public on the first and third Fridays of each month approximately one half-hour after sunset. Please come and view through our telescopes and learn about the Wilderness Above. For updates and notices, check out our website at adirondackpublicobservatory.org and our Facebook page. On our public observing days you can also call the RORO at 518-359-6317 to talk with one of our astronomers.