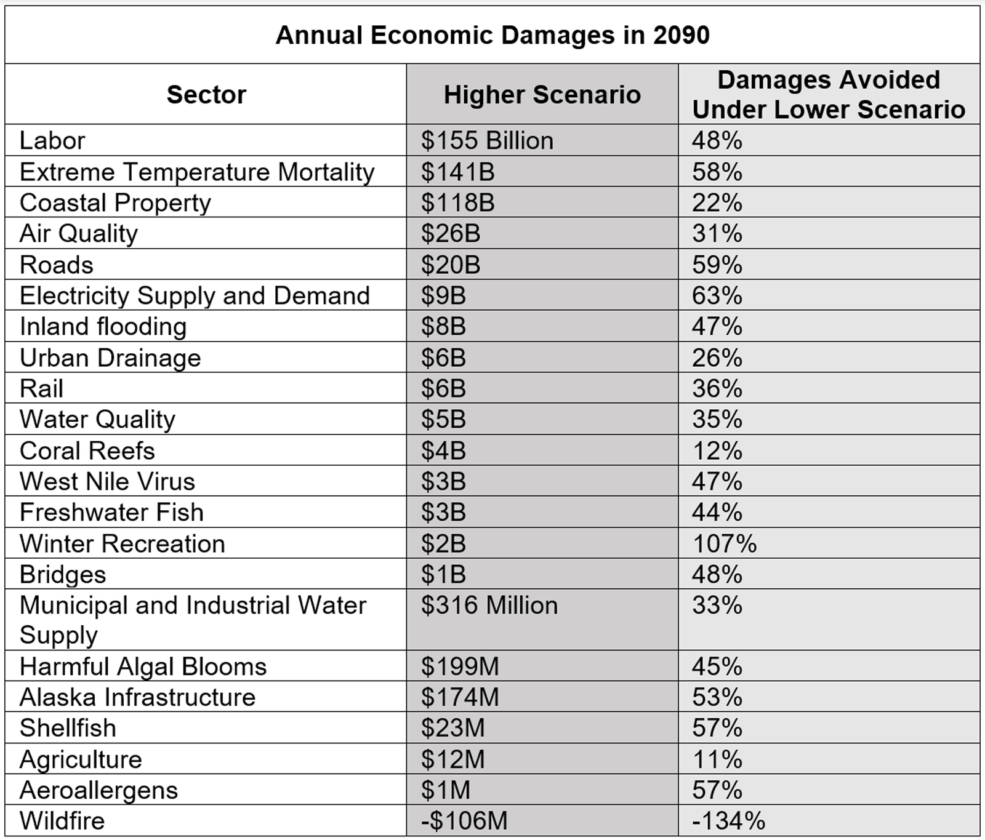 On the day after Thanksgiving, the Trump administration released the Fourth National Climate Assessment (NCA4).

NCA4 is the fourth in a series of reports mandated by Congress in the Global Change Research Act of 1990. Apparently, the NCA4 report was released on Black Friday to minimize the attention it would receive. The White House was hoping people would be more interested in their holiday shopping than in a highly technical government report on the climate. The findings have not been ignored. A couple of its dire conclusions are by 2090: (1) the costs of climate change could amount to more than 10 percent of U.S. GDP and (2) “with continued growth in emissions at historic rates, annual losses in some economic sectors are projected to reach hundreds of billions of dollars by the end of the century — more than the current gross domestic product of many US states.” Given those frightening findings, the report should have been released on Halloween.

The full 1,524-page report includes extensive economic analyses of climate change on everything from agriculture to West Nile Virus. Most importantly, the final two chapters focus on what has been done and what can be done to reduce the risks of a climate change calamity.

The NCA4 report considers three “plausible futures” of climate change and the costs associated with those futures. To avoid technical jargon, those plausible futures are referred to as higher, lower, and very low scenarios. The scenarios “capture variables such as the relationship between human choices, greenhouse gas (GHG) and particulate matter emissions, GHG concentrations in our atmosphere, and the resulting impacts, including temperature change and sea level rise. Some projections are consistent with continued dependence on fossil fuels, while others are achieved by reducing GHG emissions.” Given that worldwide emissions of carbon dioxide rose in 2017 and are expected to rise further in 2018 and 2019, the higher (worst) scenario is looking more and more likely, especially considering the Trump administration’s recent plan to roll back emission-limiting standards for coal-fired power plants.

The accompanying table, which was reproduced from NCA4 report, showsthe economic costs of climate change under the higher scenario and the portion of those costs that could be avoided under the lower scenario. Surprisingly, the greatest monetary cost associated with climate change is from lost hours of work rather than from property damage associated with hurricanes, tornadoes, floods, and fires. According to the NCA4 report, under the higher scenario, by 2090, lost hours of work associated with climate change would cause annual losses of $155 billion dollars. The cost estimates account for both increases in economic costs and decreases in economic costs. Consequently, winter recreation is predicted to benefit. Likewise, wildfire “shows very small positive effects, owing to projected landscape-scale shifts to vegetation with longer fire return intervals.”

According to a companion report produced for NCA4, “Projected impacts on extreme temperature mortality, outdoor labor, and coastal property are the most economically significant under both time periods. Estimated impacts on air quality and road infrastructure are also large.”

The final two chapters of the report discuss efforts to adapt and to mitigate climate change. Simply put, adaptations are ways in which we live with the consequences of climate change. According to NCA4, adaptations include “decisions about the location and design of buildings and infrastructure, engineering standards, insurance rates, property values, land-use plans, disaster response preparations, supply chains, and cropland and forest management.” The report also lists five important takeaways or “key messages.” Encouragingly, adaptations to climate change are increasing and the benefits of adaptations outweigh the costs. Discouragingly, the pace of climate change is outrunning our ability to adapt.

Likewise, the chapter on mitigating climate change includes four “key messages.” On the positive side, initiatives to reduce emissions are taking place in “a growing number of states, cities, and businesses” and “global-scale reductions in greenhouse gas emissions” can reduce the economic damages of climate change. However, one of the most damning takeaways is “in the absence of more significant global mitigation efforts, climate change is projected to impose substantial damages on the U.S. economy, human health, and the environment. Under scenarios with high emissions and limited or no adaptation, annual losses in some sectors are estimated to grow to hundreds of billions of dollars by the end of the century. It is very likely that some physical and ecological impacts will be irreversible for thousands of years, while others will be permanent.”

As humanity flirts with a climate change catastrophe, it seems appropriate to end this piece with a parody of that perennial holiday favorite “Baby, It’s Cold Outside,” which is all about flirting:

Environment has been (Been hoping that it’d be coolin’)

So really we are gonna hate (The expense to mitigate)

How can they deny? (Cabs over heated out there)

I wish I knew how (Your eyes are wide open now)

Hope answer is no (But baby it’s hot outside)

The planet has been (Climate change is a bad scene)

So hot and warm (Look out the window at that storm)

California burning some more (Never such a wildfire before)

I’ve got to profit (Baby you’ll fry out there)

By burning more coal (It’s one hundred degrees out there!)

You’ve got a million grand, (I sweat when I touch your hand)

Why so greedy? (How can you do this thing to me?)

Earth will be unlivable tomorrow (Think of my life long sorrow!)

At least there will be plenty implied (If you got heat exhaustion and died!)

Ice really can’t stay (What will our children say)

Okay fine, no more denying it

That took a lot of convincing!