SARANAC LAKE — Since the summer, the Rev. Eric Olsen has been pastor for two churches: one Methodist, one Lutheran, both housed in the stately gray stone house of worship on the corner of Church and St. Bernard streets.

I thought this was worth an interview, but I didn’t get around to it until a month ago when the Enterprise published a heartfelt Guest Commentary titled “Faith, not fear.” Olsen wrote it in response to an Enterprise editorial that hoped for increased Christian unity 500 years after Martin Luther triggered the Protestant Reformation.

“The arguments between our denominations within the Christian faith or with those of different world faiths are as inane as fleas arguing over who owns the dog,” he wrote. “I refuse to look at other faith groups as competition, nor will I look down upon them and their quest for truth and knowledge.

“Now more than ever we need to respect each other’s voices, listen, learn, pray and fight the real battles and not each other.”

Originally from Staten Island, Olsen moved to Saranac Lake as pastor of the Holy Trinity Lutheran Church shortly after his ordination in 1988. He is probably best known for his military service: He joined the Army as a chaplain in 1992, switched to the Army National Guard in 1999, helped in New York City after 9/11, served in the second Iraq war — where he survived an IED attack and was awarded the Combat Action Badge — and was head chaplain for the entire New York Army National Guard from 2008 until his retirement in 2013. 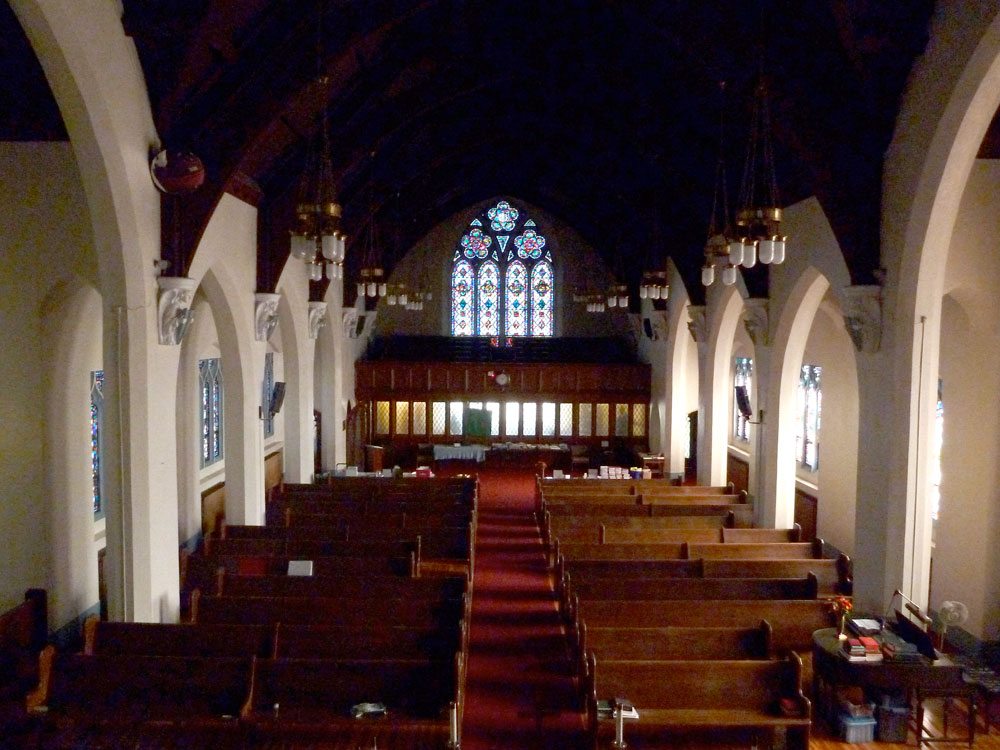 Since retiring, he returned to being Holy Trinity’s pastor and also to being a prison chaplain at Adirondack Correctional Facility in Ray Brook, which he had done on and off since 1999. He was also hired to lead Homeward Bound Adirondacks, a Saranac Lake-based organization that aimed to help war veterans reintegrate into society, although it hasn’t fulfilled its glowing initial promise.

In July, the Rev. Wilbert Gamble left Saranac Lake’s First United Methodist Church to serve in Watertown. At one point in the recent past, First Methodist’s pastor had covered for the Lutherans until Olsen returned. Now Olsen was asked to lead the Methodist services. It’s only temporarily, but he said the Methodists can’t yet afford to hire a full-time pastor.

The two congregations already share more than a building. They come together for Bible study Sunday afternoons and for occasional work days, and some Lutherans serve food at the Methodists’ free community suppers on Wednesday nights. They also share an organist. Now Olsen is trying to get them to share office equipment.

“I’m trying to get past things like, instead of having two copiers, have one copier,” he said.

Olsen said about 50 people usually attend each Methodist Sunday service, whereas about 10 to 20 attend the Lutheran services on Sunday evenings.

“Personally, I’m comfortable with both,” he said. The Lutherans are “a little more liturgical, with communion every Sunday and a liturgy [that] is very structured … whereas the Methodists are very word-oriented. They want solid, good preaching.”

Saranac Lake’s Lutherans tend to have moved here from other places while most local Methodists were born and raised here, Olsen said.

“This was an area that was settled by Methodists many, many years ago,” he said. “The Troy Conference, which started in Troy, New York, settled the whole North Country, whereas the Lutheran church didn’t start until 1980 — you know, for the Olympics.”

Saranac Lake’s Methodist community traces its lineage from the area’s first Christian clergyman, a “circuit-preacher” named Samual Smith who came here in 1839, according to a December 2002 Enterprise column by Deborah Donaldson.

I asked Olsen what the Methodists need to do to afford their own full-time pastor.

“I’ve learned that Christian churches that are preaching Christ and not getting caught up in other stuff too much will grow,” Olsen said. “There’s a hunger for meaning within our culture. People are saying, ‘Well, churches are dying because kids don’t want to come’ — and kids are dying because they have no meaning.

“Sometimes people get in this survival mode with a church, and this church is not in survival mode. It’s a well-oiled machine that’s looking to grow and looking to thrive. And there are a lot of opportunities to let people know that this is a place for the community, and that’s one of the things we’ve been able to do here. There’s a community supper every Wednesday where we serve 125 people. Now that’s not a ‘church’ thing, but it is a church thing. The turkey dinner [an Election Day tradition], we served 430 people. That’s a lot of people.”

He said he’d like to see the church host more community events such as trivia nights, family game nights and concerts. He would like to do the same with the Methodist church in Bloomingdale, which merged with the one in Saranac Lake.

“There are very few places right now in Saranac Lake where people can go and have community without paying for it,” he said.

He added about the local Methodists, “I have never met a more dedicated — and I’m being very honest here, and I’ve been around the world — a more dedicated group of people wanting to do right by the people in the community.”

The denomination in which Olsen was ordained dates back to Martin Luther, the German monk and theology professor who sparked the Protestant Reformation 500 years ago. These days, the Lutheran and Catholic churches are closer than they have been since then, and Olsen credits that largely to the current Catholic pope, Francis. In our interview, Olsen referred to the church of Rome as “the mother church” that “speaks for Christians globally.” He said he became friendly with Catholic Cardinal Timothy Dolan of New York through his work with the National Guard.

“The key for me,” Olsen said, “that altar is about forgiveness, because the day I don’t mess up is they day they bury me, and even then they’ll probably blame me for dying on the wrong day.”

Olsen is big on ecumenism and thinks Saranac Lake’s Ecumenical Council has more good work to do. He would like to bring back the pulpit swap, in which pastors occasionally preach at different churches in the village.

“When we take off the chains of doctrine … we do a lot better.”

For those who don’t attend church, he asks, “What voices are you listening to to nurture your soul?

“There are many voices out there, and many of our young people are listening to strange ones.”

If you have a subject for Peter Crowley’s Roving Reporter column, contact him at pcrowley@adirondackdailyenterprise.com or 518-891-2600 ext. 22.