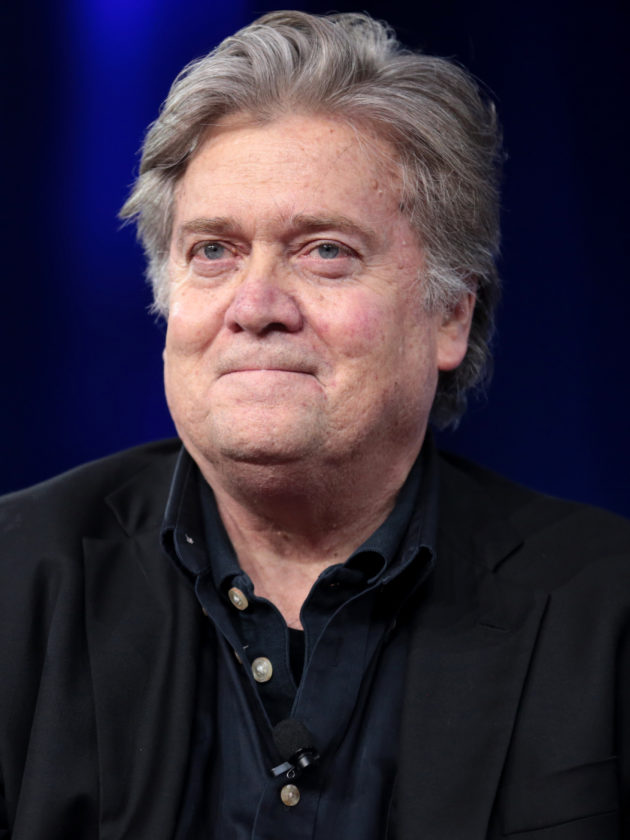 I’ve been looking all afternoon for the meaning of “de-operationalize.” According to Steve Bannon, that was his mission when he was named to the National Security Council. Beyond a few suggestions, I haven’t gotten very far with my research.

An anonymous source said, “Steve has moments of Lewis Carroll envy. Tries to come up with words like ‘slithy’ and ‘brillig.'” That could explain it. It’s a well-known fact that Bannon is himself a frumious Bandersnatch.

Another possibility is that Bannon thinks using a word everyone has to look up will make his efforts seem so smart they will escape question. His ambition to “deconstruct the administrative state,” for example, will seem to be well-thought-out patriotism rather than a directive from Vladimir Lenin.

Actually, I don’t suppose what he was up to at the NSC matters much anymore — he got kicked off of it.

In addition, Bannon’s power to deconstruct the administrative state becomes more limited by the day. Kid Kushner, the leader of the “corporatist, globalist” faction in the White House, is first son-in-law, and he’s not keen on deconstruction. It could be that by the time this is printed, Bannon may have been completely removed from the payroll of the government he would deconstruct.

I wonder from time to time (usually during cocktail hour) what it might be like if an unemployed Bannon were to relocate in Saranac Lake and act out his deranged patriotism here. Think about it.

Under Bannon, trustee meetings would open with a reading from Lenin; the Pledge of Allegiance would come second.

To de-operationalize village government, he would ask for and accept the resignations of all village employees — privatize the whole thing. It would be cheaper and more drain-the-swampish to get a temp agency to fill those make-work positions like village manager and community development director.

He would revitalize the village economy by adopting a no-exceptions, Village-First stance. The current debilitating practice of allowing people to work in Saranac Lake while living in foreign areas like Malone and Lake Clear would be ended. Starting day one, it would be “Work in Saranac Lake? Live in Saranac Lake.”

The era of job-killing overregulation would be but a memory. Driver’s licenses? State intrusion on individual rights. Done. Over with. Same for building codes. All that baloney about them being necessary for health and safety would be shown to be just that — baloney. Citizens of Saranac Lake would once again be able to build whatever kind of house they want in whatever way they want without the government interfering.

Taxes? Just end them. Stop with snow plowing and other unnecessary spending, and the need for money to run the village would be so small it could be met with an occasional bake sale and car wash. And unlike medical insurance, no one would be required to buy a cake or get their car washed.

In the first hundred days of a Bannon administration, the local swamp would be drained, the administrative state would be deconstructed, and the Board of Trustees would be de-operationalized.