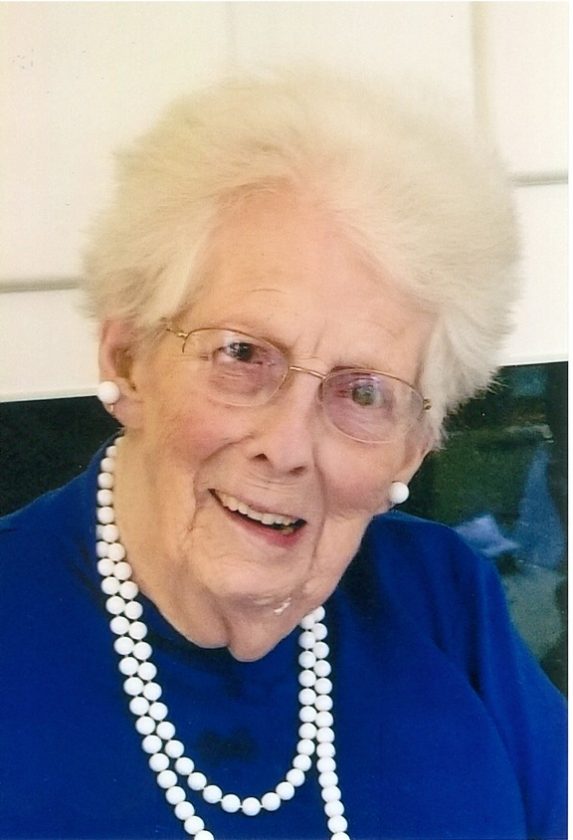 It is with deep sorrow that the family of Virginia G. Bristol announces the passing of a wonderful wife, mother, loving grandmother, great-grandmother and thoughtful friend on Nov. 29, 2019 at the age of 100.

She was born Virginia Catherine Gallagher, the second of four daughters to the late John P. and Norah A. Gallagher in Irvington, New York, on Feb. 15, 1919.

She graduated from Irvington High School and the Woods School of Business. In New York City, she worked as an executive assistant to the general manager at the Commodore Hotel (now the Grand Hyatt), the Hotel Edison and the Barbizon Hotel for Women. In 1944, she married Leonard J. Bristol in Immaculate Conception Church in Irvington. After living in Baltimore, Maryland, where her husband was a physician at Johns Hopkins Hospital, they moved to Trudeau, New York in 1949, and then to Saranac Lake in 1951.

Her life was completely focused on family, and she was the consummate stay-at-home mom. She never missed an opportunity to cheer on and support her children with unfailing attendance at all types of school-related activities and athletic games. When her seven children were grown, she and her husband built a home in Rainbow Lake, where she has lived since 1978.

Ginny, as she was known by all, was a woman of outstanding kindness and grace who lived her life in love and wisdom. She faced adversity and sickness with great courage, and her unwavering faith in God was evident in everything she did. Each time she was stricken with an illness, her faith in God and prayer gave her strength, courage and the will to endure, succeed and survive.

She was a longtime, faithful communicant and active member of St. Bernard’s Catholic Church for 70 years, having served as a trustee of the parish, and for many years as a Eucharistic Minister.

She was a tireless volunteer who served countless religious and civic organizations including St. Bernard’s School and Church, the Girl Scouts of America and Meals on Wheels. For over 30 years, she greeted patients and visitors at the front desk of the Adirondack Medical Center.

Ginny was a matriarch in the best sense of the word and leaves a legacy to her family and friends that celebrates the strengths of family and service to others.

She was the deeply cherished mother of Noreen and her husband Donald Oslander of Madison, Connecticut, Dennis and Pamela Bristol of Durham, Connecticut, Michael Bristol of Middletown, New York, James Bristol of Bartlett, Illinois, and Eileen and her husband Paul Leahy of Saranac Lake; mother-in-law of Sandra Bristol Masci; the loving grandmother of Kathleen Ann Bailey, Kristen and David Oslander, Shannon and her husband Christopher Flatley, Erin Bristol, Nicholas Bristol, Jonathan Bristol and his wife Naomi, Ryan and Zachary Bristol, and Tabatha and Craig Leahy; and the treasured great-grandmother of Alexis Smith, Nora and Colin Flatley, Lillian, Ruby, James David Bristol and Virginya Bristol. In addition, she leaves to cherish her memory 34 nieces and nephews, many of who were in attendance at her 100th birthday celebration.

She was predeceased by her beloved husband of 71 years, Leonard J. Bristol; son Kevin; daughter Kathleen; granddaughter Carrie Leigh Bailey; and three sisters and their husbands, Frances and John Madey, Patricia and James Lynch and Eleanor and Fred Anderson.

Virginia’s family expresses sincere gratitude for the exemplary care she received for the past several years from the home caregiving team.

The family will receive friends from 10 a.m. until noon Friday, Dec. 6 at the Fortune Keough Funeral Home in Saranac Lake.

Following the visitation, a Mass of Christian Burial to celebrate Virginia’s life will be held at 12:30 p.m. in St. Bernard of Montjoux Church with the Rev. Patrick Ratigan officiating.

Expressions of sympathy in her memory may be made to the Saranac Lake Volunteer Fire Department, Historic Saranac Lake or to the youth camp named in honor of her son Kevin, the New York Elks Camp Bristol, Inc. in West Monroe, New York (nyelkscampbristol.org). Family and friends may share their memories and sing the online guestbook at fortunekeoughfuneralhome.com.