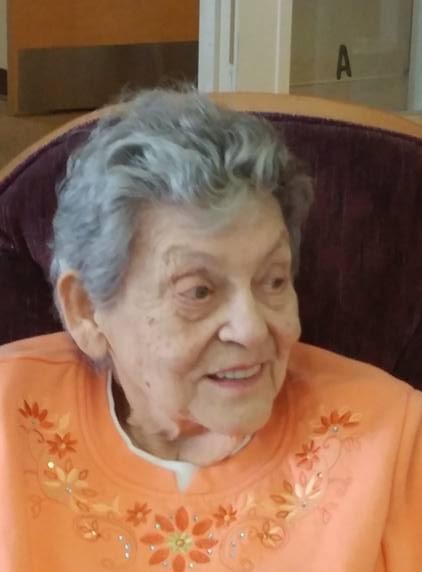 Elaine Emily Tebo, of Tupper Lake, died at the Champlain Valley Physicians Hospital in Plattsburgh on Friday, Oct. 11, 2019, at the age of 90.

A funeral Mass for Elaine is scheduled for Tuesday, Oct. 15 at 10 a.m. at St. Alphonsus Holy Name of Jesus in Tupper Lake with Father Douglas Decker officiating. A burial will take place following the service at Holy Name Cemetery in Tupper Lake.

Elaine is predeceased in death by her brother Raymond Brunet and sisters Janet Rabatoy and Theresa Lavinge.

Elaine was born on Feb. 9, 1929, in Tupper Lake, daughter of Liva and Fred Brunet. She attended Tupper Lake Central School. She married William Tebo, who predeceased her in 1993, on Sept. 14, 1946, at the Church of the Holy Name of Jesus in Faust with Rev. Finnegan as the officiant. Elaine worked in the cafeteria at L.P. Quinn Elementary School in Tupper Lake as an assistant cook, retiring in 1994. Gram’s favorite times were with her family, including watching and enjoying her grandchildren and great-grandchildren.

Donations in Elaine’s memory can be made to Mercy Care of the Adirondacks at 185 Old Military Road, Lake Placid, NY 12946, or Adirondack Adult Center at 179 Demars Blvd., Tupper Lake, NY 12986.