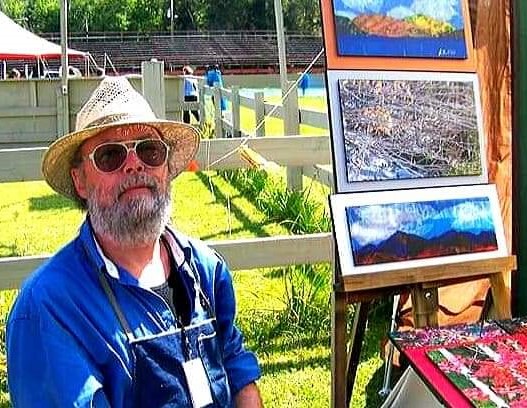 He graduated from Lake Placid High School in 1975 and went on to study fine arts, music and theater at SUNY Plattsburgh. During the ’80s and early ’90s he worked as a carpenter and drywall finisher on many homes and businesses in the area with his business partner Don Lawrence. But Jimmy’s first love was always music and the arts. He was a talented sculptor, painter and photographer, a songwriter and a poet, among many other things.

He worked for many years at the Lake Placid Center for the Arts both on the stage as a performer and behind it as the director. Some of his most memorable performances include roles in “Annie,” “Jesus Christ Superstar,” “Camelot” and “Man of La Mancha.”

He also performed on that same stage as a member of the Patnode Brothers Band alongside his brothers and sister. They also did many live performances in the Paul White Memorial Band Shell on Main Street in Lake Placid.

A crippling stroke ended Jimmy’s acting and singing career in 2000, and at the age of 43 he was forced to start all over. The doctor’s prognosis at the time was that he would neither walk again nor regain the power of speech. But they underestimated his determination. He proved them all wrong by making a miraculous recovery.

During his healing time he rediscovered his love of art and photography, and went on to start his own business called Uphill Battles. He has been featured in gallery showings at both the Lake Placid and Saranac Lake public libraries as well as Point of View Gallery in Lake Placid. His works can be found in many homes and businesses throughout the area.

But Jimmy is most fondly remembered for his witty and big-hearted personality. He loved people and lived to make them smile. He collected friends everywhere he went and kept them all his life.

He is predeceased by his parents and his stepmother Therese Kendrick Patnode, his stepsister Mona Dixon and his beloved poodle Rob.

Calling hours will be held at the M.B. Clark Inc. Funeral Home in Lake Placid on Tuesday, Sept. 24 from 4 to 6:30 p.m. with a prayer service to follow at 6:30. The Rev. John Yonkovig will officiate.

An Irish wake for Jimmy will be held Wednesday Sept. 25 from 2 to 6 p.m. with a special service at 3 p.m. at the American Legion Post 326, Main Street, Lake Placid. Burial will be at the convenience of the family.

Relatives and friends are invited to leave condolences, share a memory, upload a photograph or order flowers at www.mbclarkfuneralhome.com.