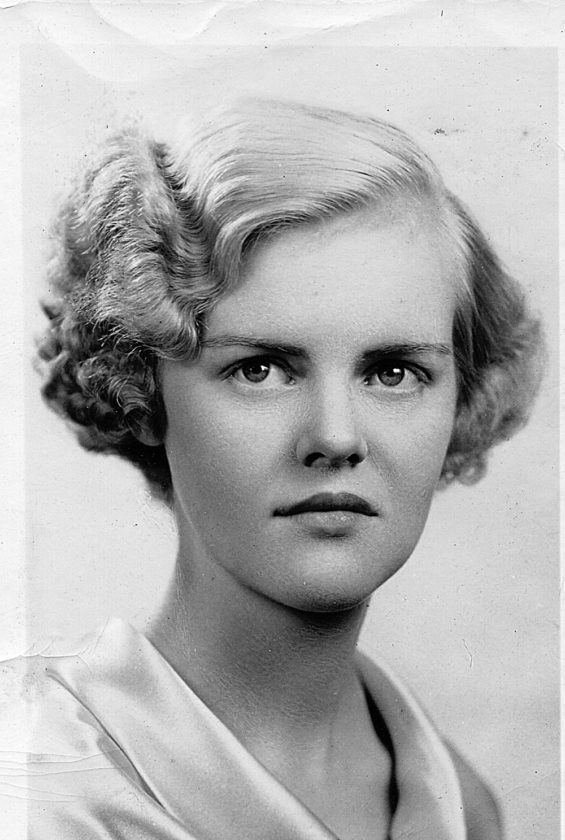 She lived in Saranac Lake since 1959, moving north from New Jersey to Delmar and then here with her husband George, who took a job as the director of the Adirondack Boy Scout Council. She found her community in Saranac Lake, working 20 years for the Adirondack Daily Enterprise, eventually becoming editor, a position she held during the 1980 Olympics. This led to her getting tickets to a hockey event that turned out to be the historic hockey game between the United States and Russian teams.

Evelyn loved crossword puzzles and reading. She organized and was a longtime member of a local book group. In her 90s she entered the Literacy Volunteers’ Spelling Bee and in 2010 won first place. She was involved in many community organizations and activities, and was an active member of the Presbyterian Church, becoming one of the first women elders. She served on the Residents Council at Will Rogers, where she lived for nine years.

She put much of herself into volunteering for charitable organizations around town, including the Red Cross and the Adult Center. She supported Bread for the World and participated in many CROP Walks, raising money for the local food pantry. She served on the board of Adirondack Habitat for Humanity and was a tutor/mentor with the Literacy Volunteers in Saranac Lake. She also put her organizing abilities to work helping catalog the Adirondack Collection at the library and compiled a history of the First Presbyterian Church in Saranac Lake.

Evelyn graduated from high school in South River, New Jersey, in 1934 at the age of 16. She was the first in her family to attend college, graduating with the Class of 1938 from New Jersey College for Women (now Douglass College of Rutgers University) with a degree in English and journalism.

Evelyn is survived by her daughter Peggy Outcalt of Brattleboro, Vermont; her son George V. Outcalt Jr. and his wife Julie of Saranac Lake; her grandson Christopher Outcalt and his wife Kirsten of Denver, Colorado; her brother Carl R. Ecke of New Jersey; her AFS exchange student/daughter Monica Loeb of Sweden; and several nieces and nephews in New Jersey.

She was preceded by her husband George V. Outcalt Sr., her father and mother Carl R. and Winifred Ecke, her sister Ruth Phillips, her daughter Winifred Outcalt, and her granddaughter Mindy Outcalt.

Funeral arrangements are in care of the Fortune-Keough Funeral Home in Saranac Lake. A memorial service will take place at 11 a.m. on Saturday, May 4, 2019, at the First Presbyterian Church in Saranac Lake with the Rev. Joanne White officiating.

Memorial donations can be made to the Saranac Lake Free Library or the Deacon’s Fund of the First Presbyterian Church of Saranac Lake.