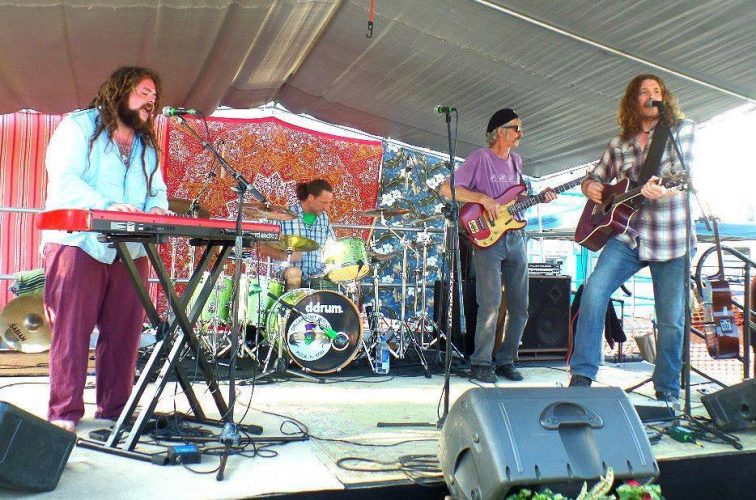 SARANAC LAKE — On Friday and Saturday, Big Boss Sausage will be back at Bitters & Bones for two special Saranac Lake Winter Carnival shows. Friday’s kick off time will be 4 p.m. and on Saturday the band will take the stage at 11 p.m. For more than two decades, the Big Boss ... 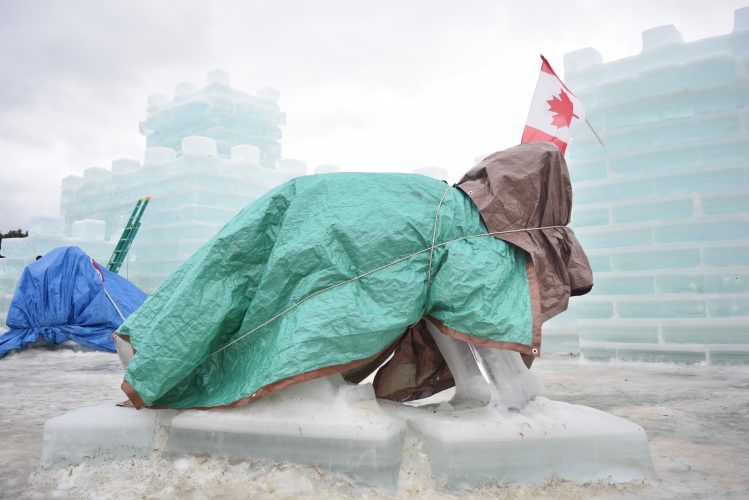 SARANAC LAKE — The Ice Palace closed Monday, with hopes of reopening Friday, due to rain, wind and warm temperatures that have made the site unsafe. Down by Pontiac Bay, Ice Palace Worker volunteers have struggled to keep onlookers out of the site, even with caution tape and orange ... 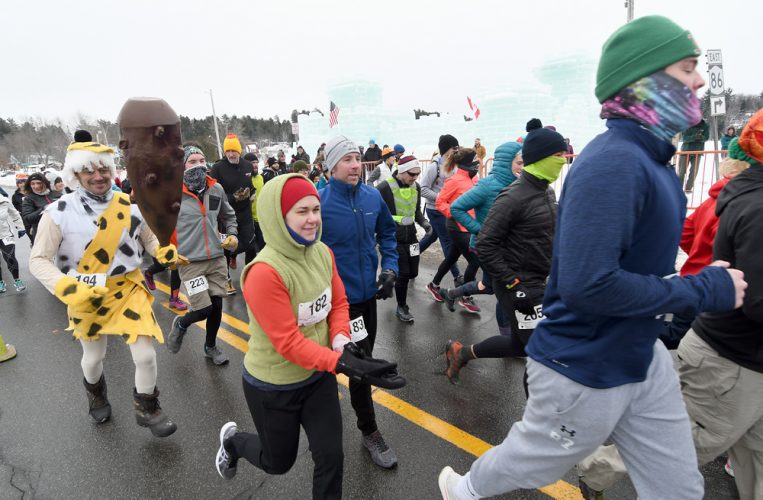 SARANAC LAKE — Eric Holmes and Jessica Shumway repeated as champions Saturday at the annual Saranac Lake Winter Carnival Fun Run. Holmes was the overall winner of the race, completing the 4-mile course in 28 minutes, 11 seconds. He won the race last year in 27:05. Jared Whalen, who ...

SARANAC LAKE — The Ice Palace closed Monday, with hopes of reopening Friday, due to rain, wind and warm temperatures that have made the site unsafe. Down by Pontiac Bay, Ice Palace Worker volunteers have struggled to keep onlookers out of the site, even with caution tape and orange ... 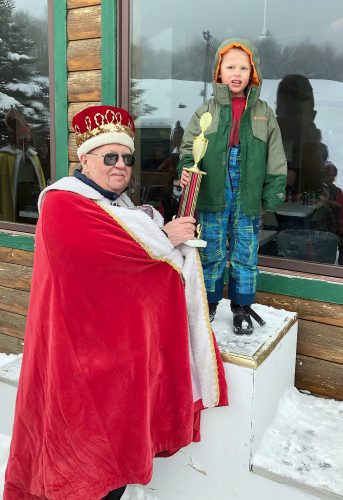 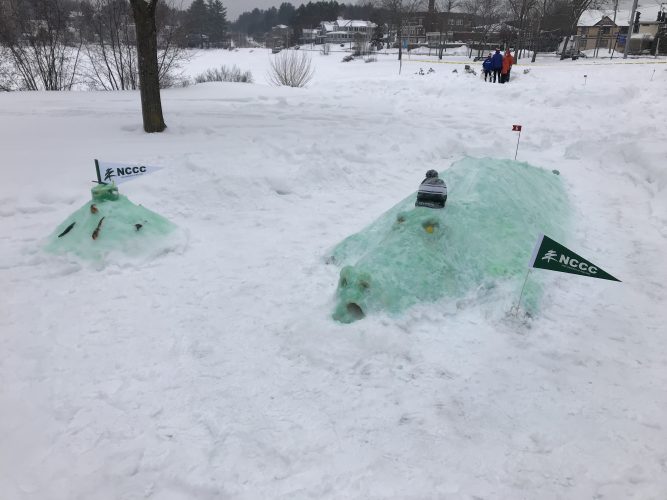 SARANAC LAKE — The Arctic Golf Build-an-Obstacle Contest was held on Feb. 2 and challenged contestants to build miniature golf obstacles out of snow for the Arctic Golf event held the following day. The three most creative obstacles, out of six in total, were chosen by members of the ... 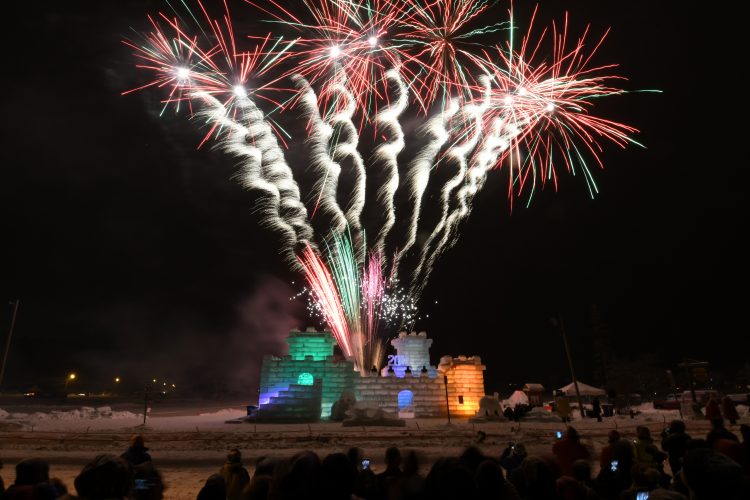 SARANAC LAKE — Beginning with a 4-mile fun run and ending with skating on Lake Colby, Winter Carnival’s first weekend saw crowds turn out from far and wide, packing the village streets between events. Sarah and Mike Lynch, returning to the carnival from Halifax, Massachusetts, saw ... 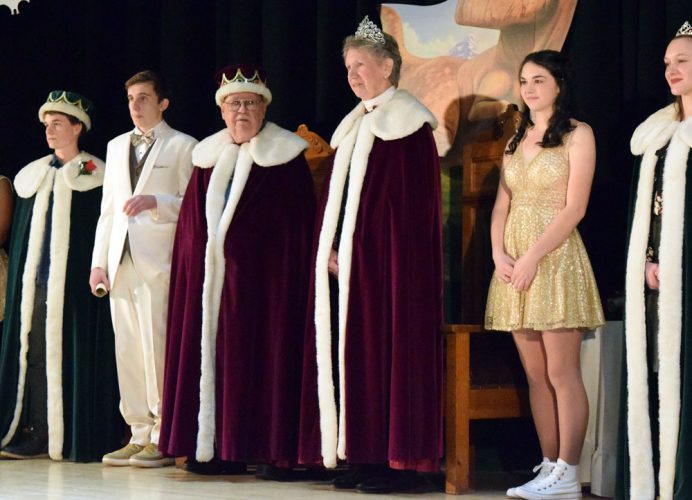 SARANAC LAKE — This year’s “Prehistoric Park”-themed Winter Carnival kicked off with the Coronation on Friday night, culminating in the crowning of this year’s king and queen: Phil “Bunk” Griffin and RoseAnn Hickey. The event was hosted as usual by the Women’s Civic ... 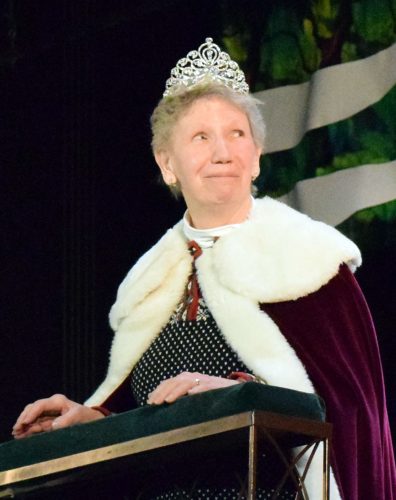 RoseAnn Hickey was born in Philadelphia, Pennsylvania, grew up in Delaware and moved to Saranac Lake in 1976 to teach at St. Bernard’s School. She has also worked at Petrova Elementary School in Saranac Lake, was the principal of St. Agnes School in Lake Placid and taught for 20 years at ... 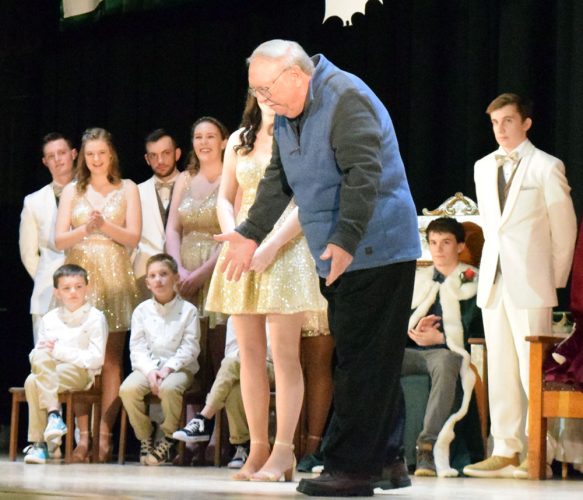 Philip “Bunk” Griffin is described as an odd duck, and a unique one. In addition to being a lifelong resident, he is also fourth generation. In the course of his 50-year career as a cook he worked at two classic town dining establishments. While on duty at the Dew Drop Inn he saw ... 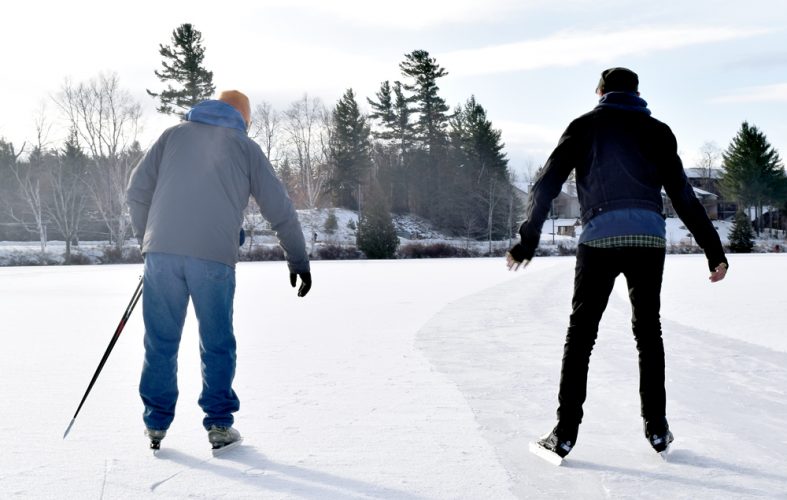 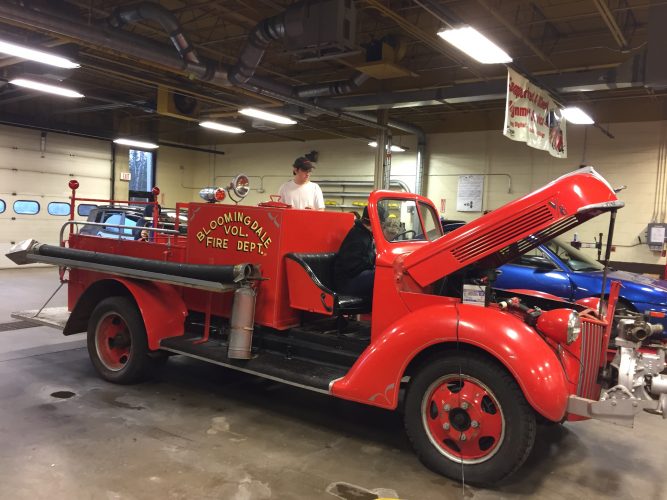 SARANAC LAKE — A group of high school students hope to restore a 1940s replica firetruck in time for the Saranac Lake Winter Carnival parade next Saturday, Feb. 9. Raymond Amell is a senior studying automotive technology at the Adirondack Educational Center, part of the ... 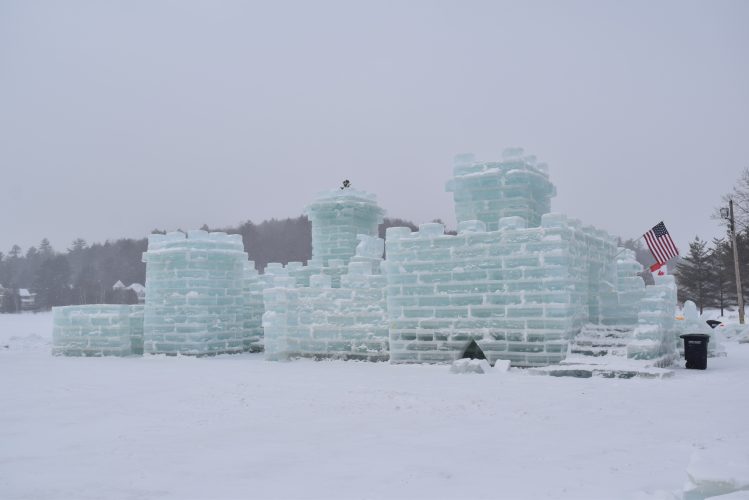 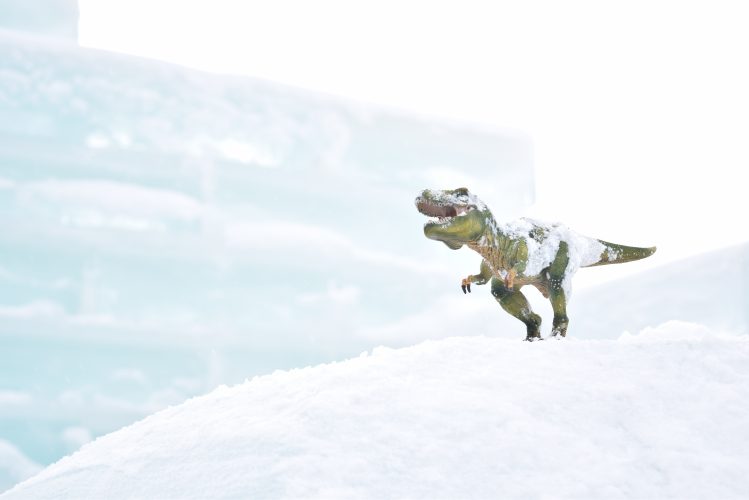 SARANAC LAKE — Winter Carnival starts this weekend. On top of festivities such as the lady’s frying pan toss, snowshoe races and the parade, many local establishments will host their own events that coincide with the celebration. - Waterhole The Waterhole bar and live music venue on ...

SARANAC LAKE — It is said that all politics are local; then that means all of the government wanted Travis Rex dead. The departed mayor of Trout Lake was found dead in a pool of chemicals that were not accidental. Thus is the beginning “Death & Acids” as the Gem*Boy Productions ... 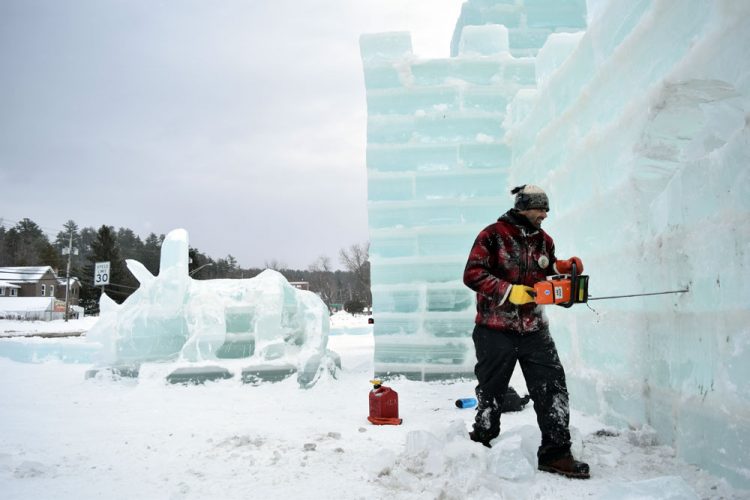 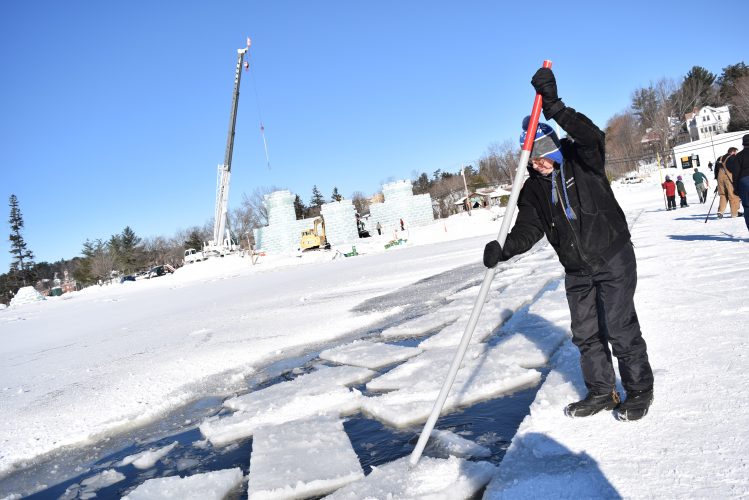 Blocking out a Palace 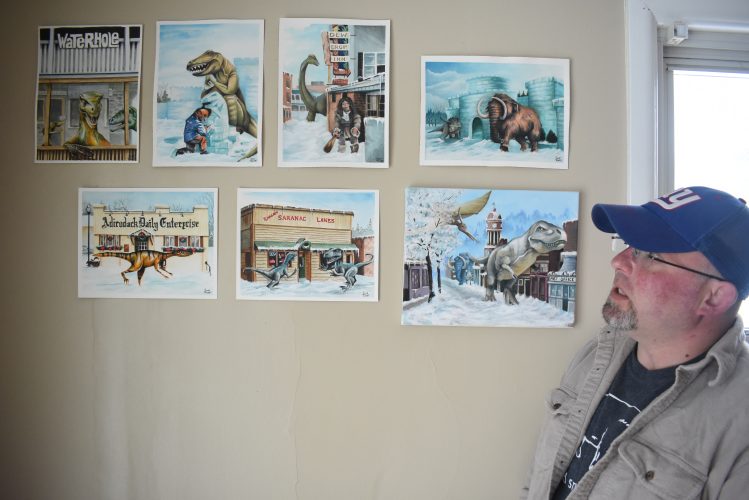 SARANAC LAKE — Raptors invade the Waterhole, a caveman steps out of the Dew Drop Inn, and a giant Tyrannosaurus rex marches down Main Street. These are just a few of the images from the mind and brush of local artist Scott Rohe. The paintings are inspired by the theme for this year’s ... 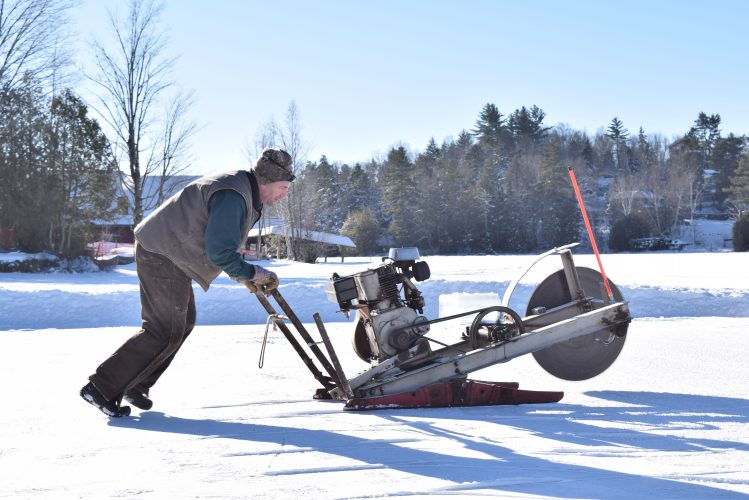 SARANAC LAKE — The same 80-year-old saw and same two operators have been used to cut the blocks for the Winter Carnival Ice Palace since 1955. “The saw was originally built in 1939 by Harry Duso, my grandfather,” Kim Duso said. “We’d harvest it out of the lake, then pack it in the ... 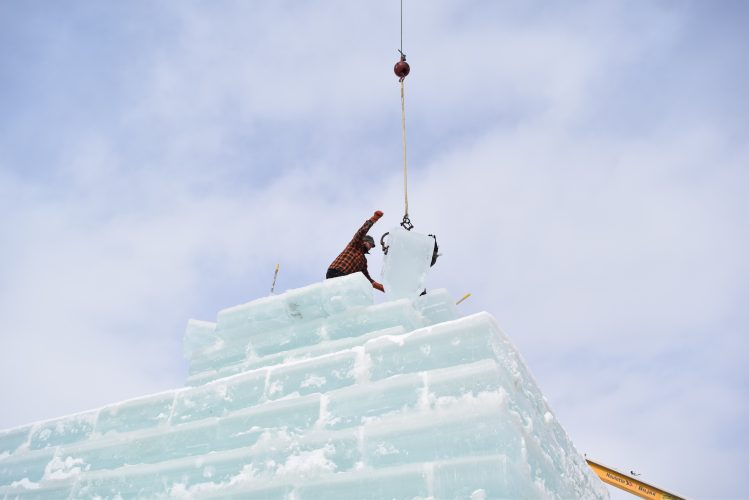