The farmers market: your source for local, pastured meat 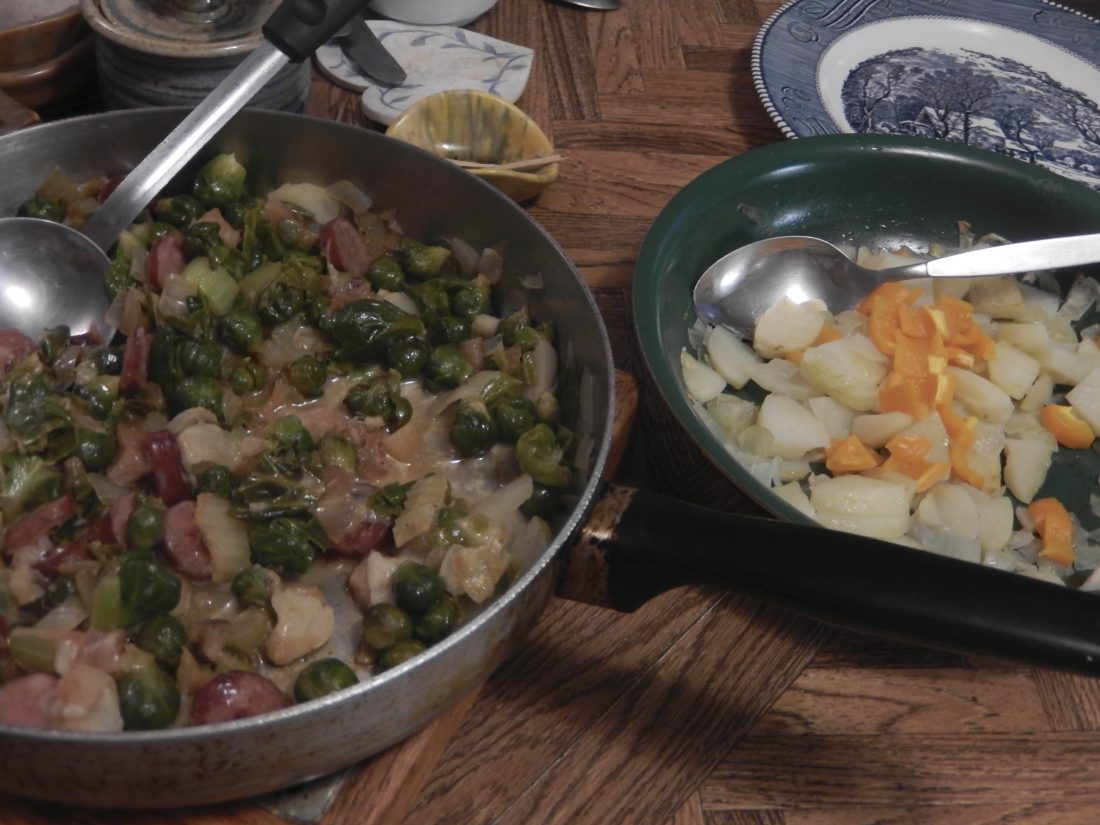 You may have heard that reducing your consumption of meat is better both for your health and for our planet. This is true. But most Americans still eat meat. So which meat should you buy?

It is best to buy local, sustainably raised meat products –like those sold at our winter farmers market by Mace Chasm Farm. They are better for the planet and better for your health.

Once upon a time, all meat was sustainably raised on small farms. Cows and sheep grazed on pastures in the summer and ate hay (dried grass) in winter. Chickens spent their days with their flock, scratching for seeds and bugs in the ground, cleaning themselves in dust baths, lying in the sun, roosting in trees. Pigs enjoyed playing, exploring, relaxing in the sun, and cooling off in the mud.

But things changed in the mid-20th Century. Beginning in the 1950s, most poultry was raised in cages in confined animal feeding operations. By the 1970s and 1980s, pigs and cattle were also raised this way. Farms were relics of a bygone era, and factories took over raising livestock. It was more efficient, since animals were ready for slaughter much quicker. Today, animal production has become an industry dominated by CAFOs (confined animal feeding operations); most animals are no longer raised on farms, but crowded into factories. This is not only inhumane, it is unhealthy for the animals and the humans who eat their meat, and it is bad for the environment, producing greenhouse gases and polluting our waterways.

Each year, more than 9 billion chickens are raised on American factory farms, crammed in cages and dirty sheds with tens of thousands of other birds where they don’t have room to spread a single wing. The filth and confinement lead to disease, so they’re given antibiotics with their feed to keep them alive until slaughter. Wire cages are stacked on top of each other, so excrement from the birds above falls on those below. They never meet their parents and aren’t raised by them. They never feel the sunshine, never breathe fresh air or take dust baths. They don’t build nests or roost in trees.

Cows and pigs are similarly packed into cages, where they can’t move, never see green grass, fresh air or sunshine and stand in their own excrement. Cows raised this way are fed grain rather than grass or hay. Yet cows are herbivores with two stomachs who chew their cud and are meant to eat grass, not grain. Grain actually changes their digestive system, making cows sick –and cows raised on grain produce meat that is high in inflammatory omega-6 fats. In contrast, meat from grass-fed cows contains higher levels of healthier omega-3 fatty acids. Yet today, only 1% of cattle are raised on pastures and fed grass.

“Crowding Pigs Pays” was the headline in a Nov. 15, 1993 issue of National Hog Farmer, a leading industry publication. A full 97% of the pigs we eat today never get a chance to play and explore. Instead, they spend their lives confined in cages too small to turn around in (just 7 feet by 2 feet). They have no sun or fresh air. They develop neurotic behaviors and are then subjected to painful treatment — breaking off their teeth and chopping off their tails –without anesthesia.

Animal factories are also bad for the environment. They produce high concentrations of methane (a stinky greenhouse gas) and their manure lagoons pollute streams and groundwater.

There are a few local farmers left who are raising meat sustainably, and we have several such family farms here in the North Country. These independent small farmers treat their animals humanely both in life and slaughter, and feed them a natural diet without hormones, antibiotics and other chemical additives. The animals are raised outside in the fresh air, where pigs are free to root, chickens scratch in the dirt for bugs, cows and sheep graze on pastures. Meat from these animals is known as pastured or grass-fed. This is the traditional method of raising farm animals. It is ecologically sustainable, humane, does not pollute our waterways, and produces the most nutritious meat.

Sustainably raised pastured meat is not only better for the animals — it’s better for your health. Animals raised in CAFOs are given antibiotics to keep them alive in unsanitary conditions and prevent disease, which is rampant in crowded conditions. They’re also fed steroids and growth hormones to make them fatter quickly. Meat from such animals is laced with drug residues.

A study conducted jointly by the USDA and researchers at Clemson University in South Carolina (S.K. Duckett et al, Journal of Animal Science, (published online) June 2009.) found that grass-fed beef is better for human health than grain-fed beef. Grass fed meat is naturally lower in fat and higher in omega-3 essential fatty acids, vitamin E, beta carotene, the B-vitamins thiamin and riboflavin, and conjugated linoleic acid (CLAs) than factory-raised meat. It also has more minerals like calcium, magnesium and potassium. This is because the animals can graze on grass, other plants, and bugs typically found on pastureland. They’re exposed to fresh air and sunshine.

Local, sustainably raised, grass-fed meat is not only healthier, but better for the environment. It ensures increased food security and greater bio-diversity. Less fossil fuel is used to get the meat to the consumer. Fewer greenhouse gasses are produced. Groundwater remains clean and pure. It also benefits the local economy and develops relationships between producers and consumers.

Courtney Grimes-Sutton and Asa Thomas-Train from Mace Chasm Farm bring eggs, chicken, beef, lamb and pork to our Saranac Lake farmers market each week. They have all different cuts of meat from roasts to ground, as well as bacon, ham, sausage and other meat products.

Raising animals sustainably on pasture takes more time and money – so the end product costs more than animals raised on feedlots. But it’s well worth it to reduce the amount of animal protein in your diet – and invest in quality meat and eggs that is raised sustainably.

There is an old saying that it is better to pay the farmer than the doctor. With our quest for cheap food, Americans today spend less money on food than people in other countries – and lots more on medicine and food supplements.

You can find some meat at your supermarket labeled organic or grass-fed — but it is always better to buy direct from an area farmer you know and trust. Supermarket labels can be confusing. Many are fooled by the organic label. This means that the animals are fed organic grain – not grass. It also says nothing about how they are raised. Some meat products say “80% grass fed.” What about the other 20%? And how are these animals housed? Do they roam on green pastures or are they confined in cages?

The best meat is from local farmers you know and trust; that way you know it is not full of hormones, antibiotics and other unwanted chemicals. You can visit the farm and see how the animals were treated. You can buy their meat at their farm or at our local farmers’ market.

Get to know both your meat farmer and their products: roasts, chops, ribs, ham and sausage. Less expensive cuts, such as stew meat, are great simmered in a sauce.

Render bacon or heat oil in a wide, heavy skillet over medium heat. Add meat, sprinkle with salt and pepper, and brown well, stirring, about 5 – 7 minutes. Add vegetables and broth. Cover, reduce heat to simmer. While vegetables are cooking, mince the garlic and ginger; add to the pot, along with a little wine and the rosemary. Check occasionally and moisten with broth, as needed. Cook about 30 – 40 minutes or until everything is done to desired tenderness. About 5 – 10 minutes before serving time, stir in the applesauce.

1 or 2 cloves garlic (depending on size)

Steam Brussels sprouts or cook in 1/4 cup water for about 10 minutes.

While sprouts are cooking, peel and dice the onion.

Add crumbled sausage to skillet; cook a little on low heat to render fat. Add the diced onion. Cook about 5 minutes; add celery and mushrooms. Cover and continue cooking on low heat while you grate the carrot and crush the garlic with salt. Stir in carrot, cooked sprouts, and garlic crushed with salt. Stir well to distribute garlic. Cover and cook about 5 more minutes to blend all the flavors. Serve with potatoes and a salad. Serves 4.