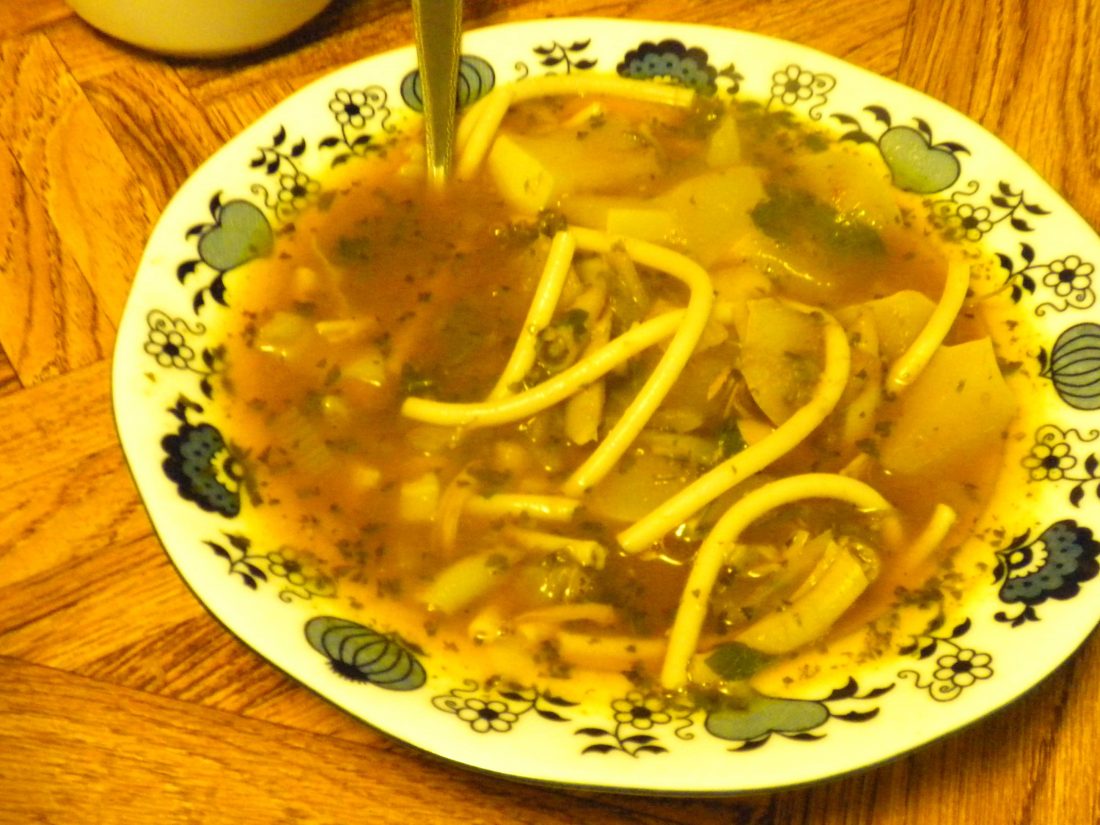 Few things warm the home and hearth in wintertime like a bowl of soup. (Photo provided — Yvona Fast)

Winter is time for hot, steamy, flavorful soup. There are probably thousands of different soups, because you can make soup from almost anything. There are broth-based soups and chunky chowders, as well as vegetarian and meat-based. Stew and chili are also types of soup, though we think of them in their own categories.

Among the most popular are soups that combine a grain or carb with meat and veggies. Think chicken-noodle or chicken-rice and beef-barley.

Some are better known than others, but the possibilities are only limited by the number of vegetables out there.

Bisque is a thick, creamy French soup often made from seafood that can also have a vegetable base. Examples are lobster bisque or tomato bisque.

Chowders are thick, chunky soups that usually contain potatoes, onions, cream or milk and seasonings in addition to the base ingredient (usually a seafood or vegetable). Examples are clam chowder or corn chowder.

There are bean-based soups like white bean, black bean and corn, lentil. Probably the most common of these in North America is split pea, with or without ham.

Minestrone is another popular vegetable soup made with beans and noodles. A similar soup comes from the northern Italian region of Tuscany. Like minestrone, ribolita is a vegetable soup made with beans and lots of dark leafy greens, but thickened with croutons or stale bread rather than pasta. Minestra maritata (Italian wedding soup) is another soup popularized by Italian restaurants. Many Americans of Italian descent enjoy these soups.

In our region Irish ancestry is also common. Irish soups are based around potatoes and cabbage. Popular at Irish pubs are the Dublin Coddle and Guinness Stew. Also common are root vegetable soups like parsnip and apple, and potato soups of all kinds.

Among Americans of eastern and central European descent, many different types of beet soups are common, as well as potato and other root vegetable or cabbage soups.

No matter what part of the world you hail from, your grandma probably made pots of homemade soup. That’s because soup warms you up, fills you up and helps you stay hydrated. It provides nutrients without excess calories.

And soup is adaptable; it can be easily made from whatever ingredients one has on hand: vegetables, legumes, grains, meat, herbs and spices. Even things generally discarded, like bones or onion skins, can be cooked first to add flavor and nutrients to the broth. You can make a delicious, satisfying soup from almost anything.

On a chilly January day, homemade soup is tasty, warm, and nourishing. What’s your favorite?

bouquet garni.(herb bundle made of a bay leaf and a few sprigs of thyme, sage, oregano, parsley, rosemary –tied with string)

Salt and pepper to taste

1 (14 ounce) can of chopped tomatoes, with liquid

When oil is hot, add leek or onion and sauté about 2 minutes. Then add carrot, celery, and turnip and continue sautéing and stirring about 5-7 more minutes. Add garlic and cabbage and saute a couple minutes more. Add water or broth and the bouquet garni. Cover. Bring to a boil, then lower heat, and simmer about 15 minutes. Add beans and tomatoes and pasta. Cook another 20 minutes or so. Taste for salt, acidity and spiciness; add salt, pepper, and a splash of red wine vinegar if needed.

Making this the night before or early in the day allows the flavors to blend.

(To prepare your own broth, start with about 3 cups of water in a saucepan. Add a little salt, a bay leaf or two, a few grains of allspice and one chicken thigh. Bring to a boil, and lower to a simmer. While the broth is cooking, dice up the root vegetables (celery stalk, carrot, onion or leek, parsnip,) and add them to the pot. Cook until the chicken and vegetables are done. Remove the chicken to a plate, cool, remove the bones, dice it up and return it to the pot. Strain broth into another pot.)

Add broccoli to the broth. Simmer until soft and tender, about 10 minutes.

In another saucepan, melt butter; add flour and stir until blended; add milk and cheese, stirring, until thickened. Add broth and broccoli. Puree with an immersion blender, or place in blender to puree.

If you wish, you can add the vegetables and de-boned chicken from the broth you made.

*You can substitute cauliflower, kale, spinach, or other vegetables for the broccoli

Author of the award-winning cookbook Garden Gourmet: Fresh & Fabulous Meals from your Garden, CSA or Farmers’ Market, Yvona Fast lives in Lake Clear and has two passions: cooking and writing. She can be reached at yvonawrite@yahoo.com or on Facebook as words are my world.

There are so many microbreweries located around the Adirondacks and more popping up every day. Though I like to ...