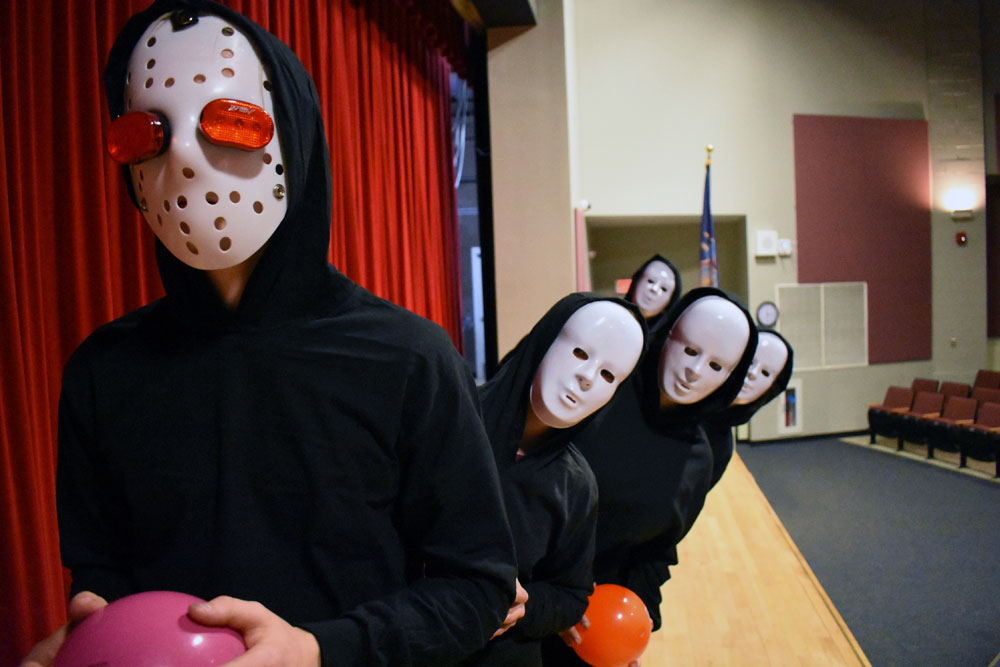 Yes, clubs, bands and sports teams are fun and can teach discipline and amazing life lessons, but groups have the potential to limit individuality and create dangerous groupthink.

This weekend, the students at Saranac Lake High School will perform the stage adaptation of Madeleine L’Engle’s “A Wrinkle in Time.” On the surface, it’s about a girl hopping through surreal times and locations, riding on centaur women and fighting an evil brain all with the goal of saving her father. But underneath the cosmic adventure, it’s a deep dive into self-identity and the horrors of herd mentality.

Director Kent Streed said he chose “A Wrinkle in Time,” for the high school’s production because it reminded him of George Orwell’s “1984,” a story where a totalitarian dictatorship runs the world, telling people what to feel, think and say. Life is bleak but those who are suffering could change it all if they tried. However, they just keep on living their mundane, unimaginative and miserable lives.

These are important realities for students to understand.

Some groups can become brainwashing machines. Look at the 1971 Stanford Prison Experiment. Though flawed in many regards, it saw a group of “guards” physically and mentally abuse a group of “prisoners” beyond anything that actually happens in jail. Many of the “guards” knew they were being hurtful, but went along with the group. It was as if they couldn’t control it.

In Malcolm Gladwell’s book “Outliers,” he describes how Korean Air was once the most dangerous airline in the world because of groupthink and traditions in hierarchy. Even if co-pilots knew something was wrong with a plane, they wouldn’t debate it with the pilot because they didn’t want to be the one to go against a commanding officer. Once those traditions were scrubbed in 1999, Korean Air has become a lot safer. In 2006, Air Transport World gave Korean Air the Phoenix Award in recognition of its transformation.

When you look at our current political climate, no matter which side you’re on, many people are falling victim to the group. Even when I’ve marched in the occasional protest or rally, I don’t shout or chant because deep down I know it wouldn’t be me saying those things — it would be some ambiguous collective.

I remember back in 2015, then-candidate Donald Trump held a rally at the civic center in Plattsburgh. Being part of the school newspaper, I went to the rally for its historical merit. Trump spouted off his traditional sound bytes, and a bunch of frat boys in red, white and blue, face paint shouted “USA.” So after a couple of minutes, I got bored and left.

My friends were outside, protesting Trump and supporting Bernie Sanders. I stood in between them, holding a sign that said: “I need a ride.” I wasn’t far from home. I just thought it’d be funny to hitchhike. After a few minutes, a couple of students stopped and let me in their sedan. They wore camouflage MAGA hats and held American flags. My friends said good luck and worried for my safety, but the students looked nice enough.

“You’re not with us, right?” one of the MAGA hats asked.

“Well, I guess not technically, but I’m with you in this car right now,” I said.

The ride home was pleasant. We didn’t get into any arguments. I never saw them again, but I appreciated their gesture even if I highly disagreed with their political views. While others drove by me and my protester friends, screaming, “GET A JOB!” these people stopped and helped out a fellow classmate. They broke the mold and overcame herd mentality.

Groupthink happens when you don’t want to be the odd one out. It’s a tough feeling to overcome, but what does it matter if you’re the odd one? Who wants to be normal anyway?