Celebrate the Fourth with … strawberry shortcake! 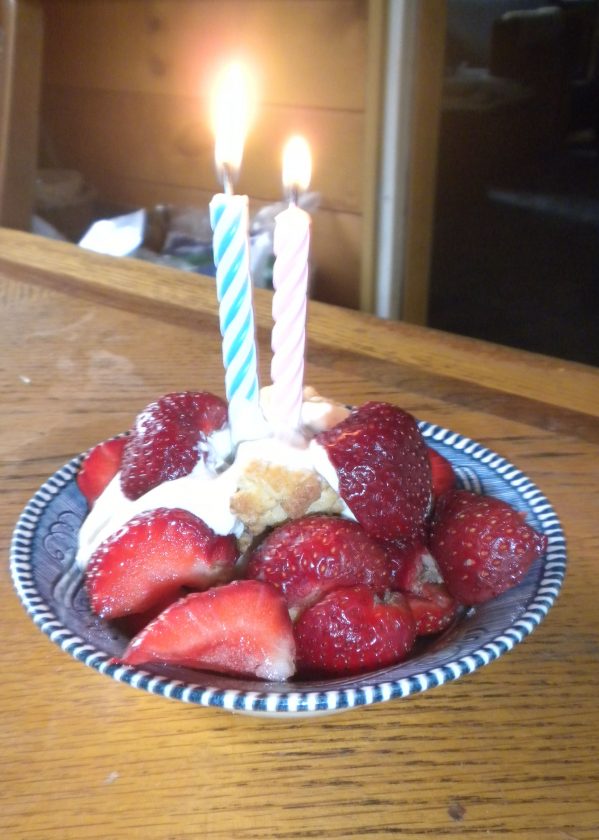 With a wet, rainy spring, summer’s taken it’s time to arrive. But now the days are warm, school’s out, and summer’s officially begun.

Summer’s first fruit, local strawberries, are ripe for picking – a little later than usual but delicious! So why not celebrate the Fourth with a truly American dessert: Strawberry shortcake, a truly American traditional, treasured and seasonal treat.

There is nothing short about shortcake! Fresh-baked biscuits are layered with sweet seasonal berries and topped with whipped cream. The term originated in 15th century England, when the word short also meant crumbly. Biscuits were once unleavened, made simply with milk, sugar, flour and butter. That is why they crumbled so easily! The first published recipe comes from the second printed English cookbook, The Good Huswifes Handmaid for Cookerie in her Kitchen (London, 1588). Ten years later, William Shakespeare named a character in The Merry Wives of Windsor “Shortcake”.

In 19th century America, potash (and later baking soda) was added to the basic ingredients as leavening. Soon, light, fluffy biscuits became fashionable in the South. One of the earliest recipes is in Mary Randolph’s Virginia Housewife (Baltimore, 1824).

In addition to being superbly delicious, strawberries are one of the world’s healthiest foods. With only 55 calories per cup, this nutrient-dense fruit is an excellent source of dietary fiber, vitamin C, potassium, magnesium, manganese, folic acid, vitamin K and vitamins B5 and B6. Because they’re full of unusual phytonutrients like ellagic acid (an anti-cancer compound), they’re considered a superfood. The unique combination of phytonutrients, phenols, anthocyanins and antioxidants means that the plump red berries protect against cancer and heart disease, and help reduce inflammation in conditions like arthritis and asthma.

Wild strawberries are native to the Americas, Europe and Asia, and have adapted to most temperate climates. The small, flavorful wild berries grow in woods, meadows, seashores, mountaintops and along roadsides. In North and South America, native people planted and tended the berries; in fact, these Western varieties were tastier, larger and juicier than their European cousins.

Berries began to be cultivated, and today there are more than 600 varieties! Because California berries are cultivated for size and storage rather than flavor and are often picked green, local berries are best. Look for heirloom varieties like Banner which are smaller but packed with flavor.

In the 1840s, someone got the bright idea to top biscuits with fresh berries. A thick, unleavened cookie was split, layered with fresh strawberries, and covered with a hard icing made from sugar and egg. The recipe was printed in the June 1, 1845 issue (page 86) of The Ohio Cultivator (Columbus). Later, Eliza Leslie, a 19th century American culinary personality, copied it in The Lady’s Receipt-Book (Philadelphia, 1847). Soon, shortcakes became a popular pastry served with strawberries, and the term strawberry shortcake was born.

“Strawberry shortcake is a luxury. Make a large, thick shortcake, split it twice through, and spread with butter and a layer of fresh strawberries and sugar, put the parts together again, and serve hot,” (The American Cotton Planter and the Soil of the South (Montgomery, AL, Oct. 1857).

Cream as a topping was added a few years later, as reported in the Genesee Farmer (Rochester, June 1862) and in Jennie June’s American Cookbook by Jane Cunningham Croly (New York, 1866). From fine restaurants to simple farm homesteads, strawberry shortcake quickly became a popular early summer dessert after the Civil War.

Biscuits, cream, and berries create contrasts in flavor and texture: sweet and tart, crumbly and smooth, hard and soft, moist and dry. While in the northeast some have used sponge caked, pound cake, or angel food cake as the base, only biscuits are firm enough to stand up to the juicy berries and damp cream without becoming mushy. Modern technology like electric beaters for whipping cream and pressurized canned whipped cream have simplified the process of making this delicious, traditional, American dessert.

To prepare berries, rinse with water, remove hull, slice. You can sprinkle with a couple teaspoons of sugar if you want, and mix to coat. It’s best to set them aside for about an hour.

Whip the cream until it forms a soft peak. Cover and set aside in the fridge.

To assemble, cut biscuit in half. Top bottom half with a generous amount of berries – about a half-cup. Place top half over. Top with more berries, about a quarter cup, then with whipped cream.

1 cup all-purpose flour (you can substitute 1/3 cup flour with buckwheat flour or oat flour if you wish. You can make oat flour by grinding oats in the food processor with the steel blade.)

In larger bowl, combine sour cream and butter. Stir in dry ingredients with a wooden spoon.

Spoon into prepared muffin tins. Bake about 20 minutes, until golden brown on top.

1 cup all-purpose flour (you can substitute 1/3 cup flour with buckwheat flour or oat flour if you wish. You can make oat flour by grinding oats in the food processor with the steel blade.)

In bowl, mix together flour(s), sugar, salt, and baking powder. You can use your hands, a spoon, or a food processor.

Cut the stick of butter into 8 pieces. Mix with pastry blender (or in a food processor with a steel blade) until you have pea-size chunks of butter.

Transfer to a large bowl (or keep in food processor). Using your hands make a well in the center. Slowly pour in the milk, cream or half-and-half. Use just enough milk to moisten the dough. It does not need to hold together.

Place a little flour on a board or counter covered with a pastry cloth. Turn dough out and knead a couple times until it is not sticky and holds together.

Place on a cookie sheet and bake about 10 to 15 minutes until risen and golden.

Author of the award-winning cookbook Garden Gourmet: Fresh & Fabulous Meals from your Garden, CSA or Farmers’ Market, Yvona Fast lives in Lake Clear and has two passions: cooking and writing. She can be reached at yvonawrite@yahoo.com or on Facebook as Author Yvona Fast.