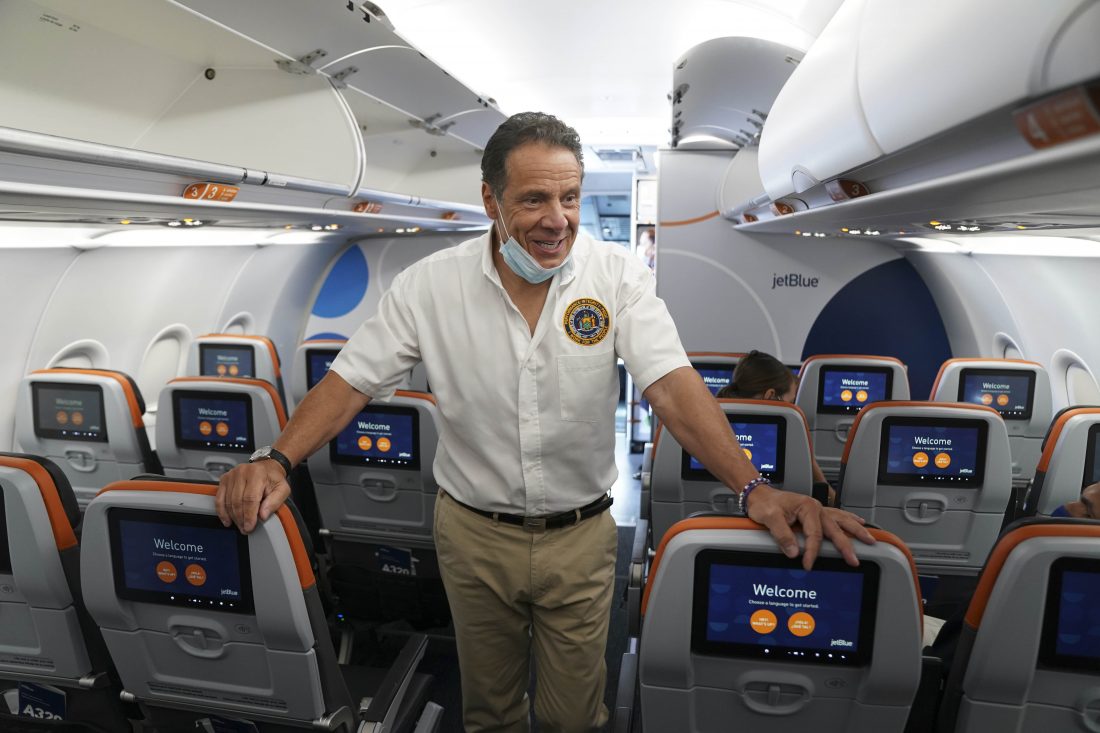 ALBANY — Senate Republicans were shot down for the second time to strip Gov. Andrew Cuomo’s expanded spending and legislative powers, which he’s held for over 140 days, as the state combats the COVID-19 public health emergency.

Lawmakers are in session for one week in a rare July return — the first in more than a decade — because of the pandemic. Senate Republicans in the minority feel the governor has enjoyed his broadened jurisdiction, they said Wednesday, and called for balance in the Albany Legislature.

“I am disappointed that the Senate Majority did not support amendments the Senate Republican Conference brought to the floor during Tuesday’s session and this past spring,” Griffo said in a statement Wednesday. “New York state legislators are elected by the people and serve as the public’s voice in Albany. Given this important dynamic, it is imperative that a balance of power, as is provided for in the state Constitution, and a system of checks and balances exists between all three branches of state government.”

Griffo criticized Cuomo, who has issued 54 executive orders and amended several laws since March 7, for inconsistent policies. The governor was seen hugging a local mayor without wearing a face mask during a trip to Savannah, Georgia, on Monday. Georgia is one of 31 states included in New York’s travel advisory requiring travelers to self-quarantine for two weeks, but Cuomo, who returned to Albany on Monday night, did not self-isolate following the trip, saying the mandate does not apply to essential workers or travelers who pass through an impacted state for fewer than 24 hours.

“It is disappointing that the governor himself seems to contradict his own directives,” Griffo said. “The livelihoods of many are at risk and much of the guidance that has been issued by the state has lacked consistency and created chaos and confusion amongst residents, businesses, organizations and others. … While many of the public safety protocols that the Governor is preaching are viable, he must lead by example.”

“People elect lawmakers to do their jobs, and Republicans are willing to tackle all of the issues confronting New York,” he said. “It is shameful that Democrats let this continue.”

Nonessential businesses have reopened statewide, barring gyms and movie theaters, or indoor dining and museums in New York City. Several businesses are required to operate on a reduced capacity or limit gatherings, such as weddings, which have a significant fiscal impact on state and local revenues.

Cuomo takes input from top aides and coronavirus task force members, but makes the ultimate decision under the state of emergency to close, open or restrict any industry he chooses.

“Right now, all the power runs in the governor’s hands,” Amedore said. “Ultimately, the governor has total say on any expenditure he wants. Absolute power could be corrupt, absolutely. I think it’s good for all New Yorkers to have a representative government and not a dictatorial type of government.”

Cuomo’s expanded power made sense early on in the pandemic, the senator said, but the governor’s indefinite control of state spending must end, and any future COVID-19 orders or guidelines should be vetted by the Legislature.

“Lay it out — let the public see it and let the lawmakers who represent the state vote it and vet it out and vote on it,” Amedore said. “That is a more balanced approach. Right now we have one person. One: The governor of the state of New York, and he can say and do whatever he wants. He can hide behind ‘well, this is what the law says’ and dictate the state of New York to open for business.

“That’s not America,” Amedore added. “We have our constitutional rights and freedoms and liberties. We should have a representative government.”

Tuesday was the second time Senate Democrats rejected an amendment to stop the governor’s emergency control after Griffo and Sen. Patrick Gallivan’s, R-Elma, initial proposal in May. Their amendment would have stopped Cuomo’s authority after nearly 90 days, required Legislature’s approval for continuing the powers and required the governor to submit a weekly report, including spending, to the Legislature during a state emergency.

On the floor, Helming said the governor’s continued use of expanded powers undermines the foundation of democracy.

“We have a system of checks and balances that must be restored,” she said. “While Republicans are willing to lead, Democrats continue to take cover and allow the governor to make choices that should be up to lawmakers. Democrats should not continually come back to session to pass self-serving legislation only to abdicate the rest of their responsibility to the executive.”

“But for months now, that voice has been stifled,” she said. “It’s time for lawmakers on both sides of the aisle to take action and return to a system of checks and balances that will ensure all people, in every corner of the Empire State are heard.

“As New Yorkers continue to safely and responsibly get back to work, they should be able to do so without any added stresses. This legislation would accomplish that goal by ensuring those in the workplace who act in good faith are not held unreasonably accountable for the spread of COVID-19.”

“His expanded emergency disaster powers were supposed to be temporary in nature, not a permanent fixture, and it’s well past time they were rescinded,” Jordan said. “This or any governor isn’t king; they are elected officials who must answer to the voters, just like all 213 duly elected state legislators.

“Senate Democrats should have joined us today in voting for our amendment to remove the governor’s expanded powers,” the Columbia County senator added. “It’s disappointing that they didn’t have the political courage to stand up for democracy and stand against continued one-man rule.”

“It’s time to end one-person rule in New York state,” Assembly Minority Leader Will Barclay, R-Fulton, said Wednesday. “At every turn, Assembly Democrats have rejected efforts to rescind the governor’s unilateral authority and ignored calls to restore representative democracy. Earlier this year, we offered an amendment that addressed emergency powers, which the Majority rejected. Their ongoing support of the governor’s expanded powers is abundantly clear. This issue is not going away. “

In Watertown, GOP leaders say they ‘Back the Blue’

WATERTOWN — National, local and state Republican officials visited the city on Wednesday to voice their support ...