Corenne and I have this unique quest to climb all the fire tower peaks in the Adirondacks, even if the fire tower has been removed. This unusual vision brought us to the Arietta region of Hamilton County on a trek that would gain us the summit of Tomany Mountain, with an added adventure of Ely Mountain and a final descent down to peaceful Jockeybush Lake.

The Tomany Mountain fire tower started out as a spiral staircase up a white pine tree before it was later replaced with a steel fire tower in 1916. Not sure why, I mean, a staircase around a tree seems perfectly legit.

After many decades of service to the Adirondacks, it was closed in 1970 and later dismantled and laid to rest in 1987. Sadly, many of the pieces of the tower can be found strewn over the edge of the mountain, along with remains of the cabin and a trash dump.

Our adventure started on a very unseasonably warm fall morning with a long drive and no less than 20 ounces of liquid energy at our disposal. Corenne and I met up with a couple hiking partners we have explored with previously and met at the parking lot for Jockeybush Lake.

At the Jockeybush Lake trailhead, we piled into one car to start this traverse at the site of the old Tomany Mountain Trail, which is just a bit farther south on Route 10. 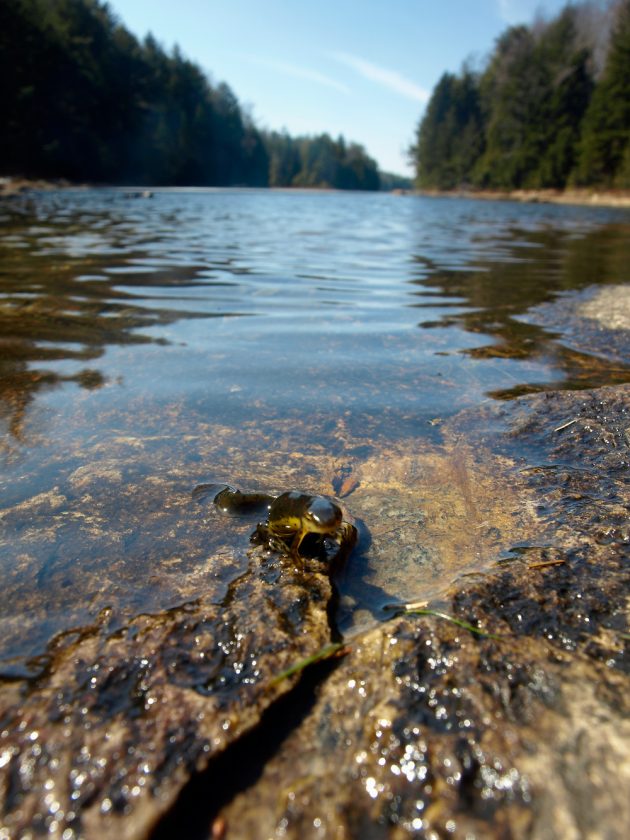 The old trail still has a small parking area across the road and a road sign that shows a hiking symbol to mark the location. We located the trail quite easily during a past drive-by through the area, so we knew exactly where to start.

We hopped onto the trail, which at the time was marked with periodic flagging. The trail follows the old telephone line, making it easier to spot along the way. State trail markers still dot trees and the telephone poles., but most were hardly recognizable in their state of disrepair.

The trail before us was easy to moderate, but a couple of creek crossings made it hard to locate and required us to stop and look around for signs of footprints, cut limbs, a telephone pole or whatever gave it away.

We spent a bit of time playing around in the cracks and crevasses of the cliff along the trail, and a neat chimney gave us a fun scramble to the top. The trail from here became a bit steeper, but overall it wasn’t too demanding compared to many trails that still exist within the park.

As the trail swept around the side of the steep slopes of the peak, we started to look for the location of the observer’s cabin. We knew the two buildings were demolished during the time of the tower deconstruction and we were sure something would be left. Sure enough, a staircase to nowhere and a few bits and pieces of the tower gave us a glimpse into the past. 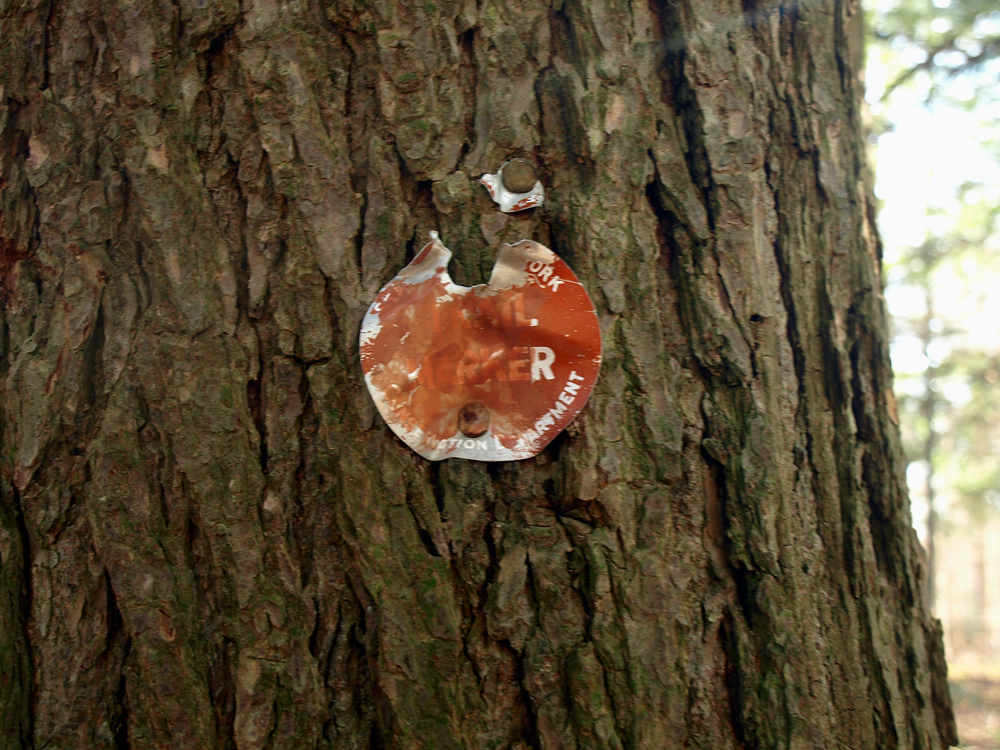 Just a bit farther, we located the survey marker and the footers of the old tower. We could see Ely Mountain in the distance, roughly a mile away. After an energy break we found ourselves starting that next leg.

Heading down the north side of Tomany was very steep as we swung from tree to tree like Tarzan impersonators, minus the small wardrobe. Wait, I mean we were wearing more than his small wardrobe — we were not going commando.

As we passed from one steep slope to another, we managed to come upon a very interesting rock feature that consisted of a massive boulder jumble and a deep chimney cleft in the mountain. A bit of exploring was in order, for sure. We didn’t find much, but it was impressively cooler in there. Surely ice would live longer here in the spring.

We soon found ourselves in a wide saddle between the two peaks and very steep slopes that would bring us to the summit of unknown rewards. This mountain was also dotted with rocks and ledges, making it all the more fun to explore.

The day’s unplanned heat and humidity was starting to wear on us, wishing we were dressed more like Tarzan. It’s amazing how 65 degrees in October can feel compared to in July.

Ely’s summit was nothing to get too entranced by, unless of course you have some odd fascination with beech trees. If that’s the case I was in your heaven.

We opted for the less steep descent to Jockeybush Lake, which was to follow the western ridge until we stood nearly over the lake itself. The ridge was a pleasant walk; mellow in nature and open like a thinning hairline (trust me, I’d know).

There was not a spruce to be seen, chin hobble (which hopple) was the woody shrub of choice on this side of the mountain, but without the leaves it is much easier to walk through.

Finally, we started to drop off Ely toward the trail that followed Jockeybush Outlet. We reached it after what felt like an unreasonable amount of time, but that was just a mental misunderstanding because in actual time it didn’t take that long.

We had to climb up along the trail a bit to reach the rocky shore of Jockeybush Lake, which was OK too because we really wanted to see this reflective gem.

The shore of this backwoods lake is one of tranquility and relaxation, and should not be missed by any hiker. We were visited by numerous salamanders as we reclined against the rocks, and one seemed to take a fancy to me and my camera. We had a moment.

It was now time to exit the forest and return to the hustle and bustle of Route 10. The only thing to round out the day would be a nice waterfall and wouldn’t you know it, around a couple of corners there it was. I had no idea it was there but in the back of my mind it just seemed appropriate.

In the end, well the end of this day anyhow, it was nice to be on a trail to guide us out. We were able to shut down our minds and just stroll.