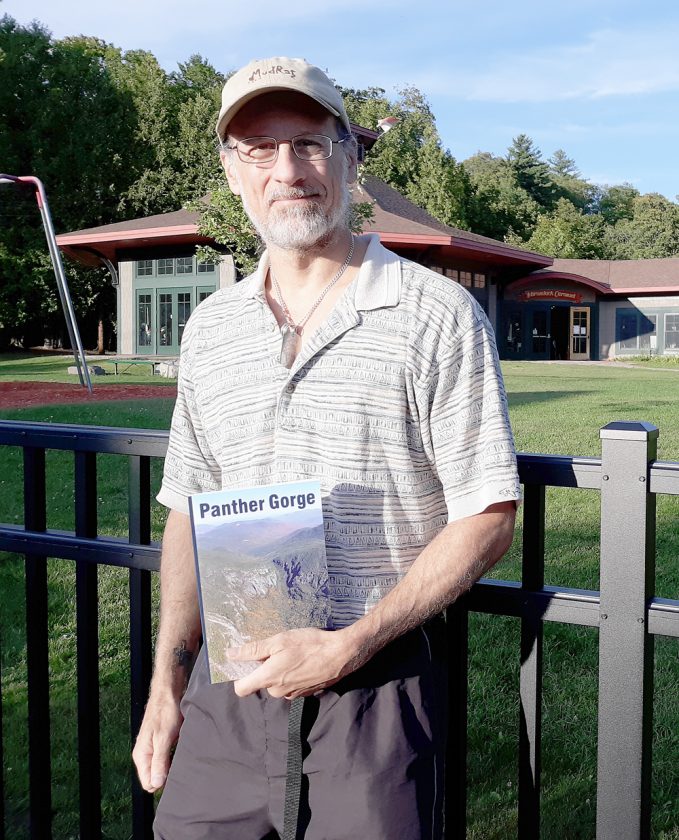 SARANAC LAKE — Kevin “MudRat” MacKenzie spends much of his free time photographing, hiking and climbing on both ice and rock within the High Peaks. But one place in particular piqued his interest, and after a couple of years of research and writing, MacKenzie is out with his first book, “Panther Gorge.”

Panther Gorge does not neatly fit into categories. It’s not a guide book, although climbing routes are thoroughly documented. Photos are all in full color throughout the tome, but it does not serve as a coffee table book.

Panther Gorge is simply a volume that shows one person’s love of a particular area.

“This is kind of an evolution, I never really planned on doing it,” he said. “I had this battery of trip reports online and I thought one of the forums was going away. I wasn’t panicking, but I wanted to kind of archive everything, so I figured I’d look up a few things on the history of Panther Gorge and clean up the trip reports and maybe put it up (online) as a PDF.

“Two years later, I realized I had 27,000 words of history — really in depth, back to the naming and the cavers — so 150 citations later, it just became a book from there.”

Panther Gorge is in the heart of the High Peaks Wilderness Area, nestled between Mount Marcy — the state’s highest mountain — and Mount Haystack, the state’s third highest.

“A physical description of Panther Gorge is in order before we venture into its heart,” MacKenzie writes in the introduction. “The last of several ice sheets that covered the Adirondacks was the Laurentian ice sheet of the Wisconsin glacial period. While rockfall explains some of the talus and cliff features in the Gorge, the southwestern moving glacier plucked pieces of stone from the southern aspects of the mountains depositing them downstream.

“Even the large spires of the Gorge are transitory, however. The same processes that created them will continue until they structurally fail.”

The book goes on to give histories of the the names, places and people who first mapped out the remote valley. While there are more than 40 climbing trips detailed in its pages, the book is not meant to work as a guide for climbers.

“I tell everybody right off, it’s not a guide book,” MacKenzie said during a recent stop in Saranac Lake. “It’s experiential. It’s nine years of our experiences in there. It’s not a ‘Look what I did.’ It’s ‘Come along with us for a ride and I’ll describe it the best I can.’ There’s a lot of really talented people that made the routes what they are, the days what they were. This book belongs to everyone that is in it.

“The history, I really wanted it to be something that could be looked at in 100 years. I’m not trying to compare it to the greats like Stoddard, but I just want it to endure after I’m gone and have value.”

While the book is built around rock and ice climbing, MacKenzie said he began climbing in an effort to conquer his fear of heights.

“It’s still there; it’s compartmentalized. It screams at me every now and again,” he laughed. “I got into technical climbing because my wife (Deb) wanted to do it. So I owe that to my wife.

“It started out as pretty low angle stuff, nothing really fancy. And I was already soloing semi-technical stuff on the slides, I just didn’t realize it.”

MacKenzie said some local climbing stalwarts started bringing him into the gorge, including Adam Crowfoot and Bill Schneider.

“I basically learned everything I know in Panther Gorge — eight miles from the trailhead, which is exactly the way you don’t want to do it,” he said. “And then people like Don Mellor and Jim Lawyer gave me a lot of advice. A lot of people came together to help me with this.”

Writing the book not to serve as a guide book allowed MacKenzie to tell stories of his climbs, and the trip reports offer much more than a simple “go here, turn here, look for this trail.”

“It is difficult to accurately describe the diversity, beauty and utter brutality of this trip,” he writes of Stunning Revelations on the Slabs of Marcy. “Many outings of the last decade have tested me, but never to this degree. The psychological demands were as grueling as their physical counterparts over almost 22 hours.

“It had rained more than I realized so I pondered whether the face would be dry. There are many places from which the top seeps so avoiding water can be challenging. Sometimes you work with what you’re given; we don’t give up easily based on ‘what-if’ concerns.”

Panther Gorge is certainly a niche book, not meant for everyone. But for hikers, climbers, people bagging the High Peaks and Adirondack history buffs, it’s a must-read.