A good year for monarch butterflies

Monarch caterpillars feed only on milkweed, as seen here in Duane. (Photo provided by Richard Gast)

A monarch pupates in the relative safety of a firewood pile in Duane. (Photo provided by Richard Gast)

A monarch pupa is seen in the final stages of development before emerging as an adult (butterfly) in Vermontville. (Photo provided by Richard Gast) 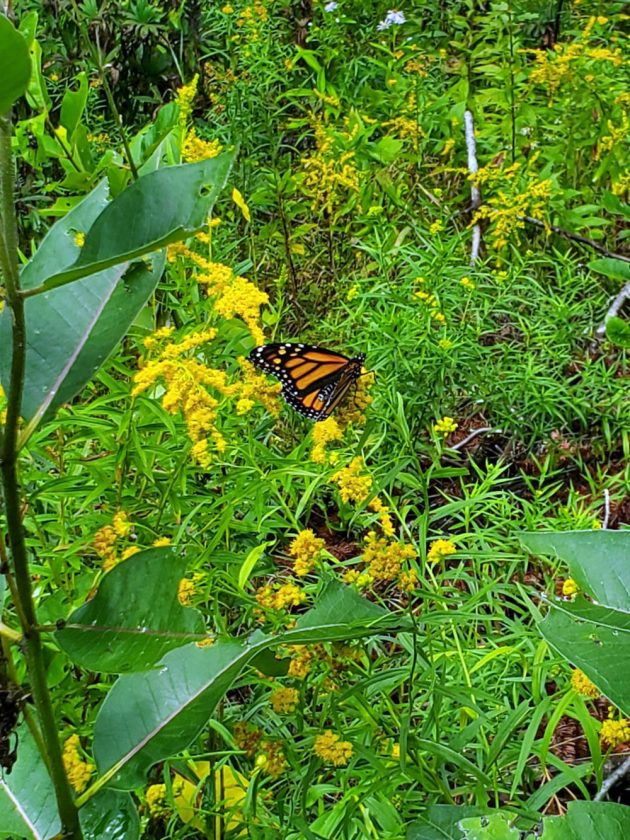 If you’ve noticed a lot of monarch butterflies (Danaus plexippus) lately, you’re not alone. From my own observations and from what people have been telling me, this summer appears to have been a very successful one for them, at least in this part of the Northeast.

Monarchs have four life stages: egg, larva (caterpillar), pupa and adult (butterfly). The caterpillars feed only on milkweed leaves and seed pods. And for this reason, adult monarch females lay their eggs only on milkweed. In fact, the search for milkweed is the sole reason for monarch migration — perhaps the most remarkable migration in nature.

As the summer season comes to an end, shorter days, cooler temperatures and declining milkweed quality signal biological changes that delay sexual maturity in monarch butterflies. The very last seasonal generation of caterpillars to emerge from chrysalises as butterflies here and across much of the northern United States and southern Canada will feast on late-season flower nectar before setting out on an epic 2,000-plus-mile migration south, to overwintering sites in the oyamel fir forests of the Sierra Madre Mountains in central Mexico. It can take up to two months to complete the journey. (Gardeners take note. Late-summer-blooming plants are crucial for providing the energy resources monarch butterflies and other migratory pollinators, as well as native bees that will be hibernating here over the winter, require.)

The entire eastern population of monarchs will have arrived in Mexico by late November — so many of them that the combined flapping of their wings creates a clear and constant sound. There they’ll overwinter in hibernation colonies, spending several months in diapause, a hormonally controlled state during which physiological activity is diminished and growth or development is suspended. Tens of thousands may cluster together in a single tree, waiting for the coming of spring when warming temperatures and longer days will signal that it’s time to mate. Barring disease, predation and winter storms, they’ll breed sometime in March and the females will begin laying the eggs of a new generation.

The monarchs currently embarking on the arduous journey south are the great-great-grandchildren (and in some cases the great-great-great-grandchildren) of the butterflies that braved the long trip to Mexico at this time last year. They are sometimes referred to as the “Methuselah generation” because they will live for seven or eight months, unlike the successive migratory generations of monarchs that travel north, living as butterflies for only a few weeks, as they search for flower nectar, mates and milkweed upon which to lay their eggs. 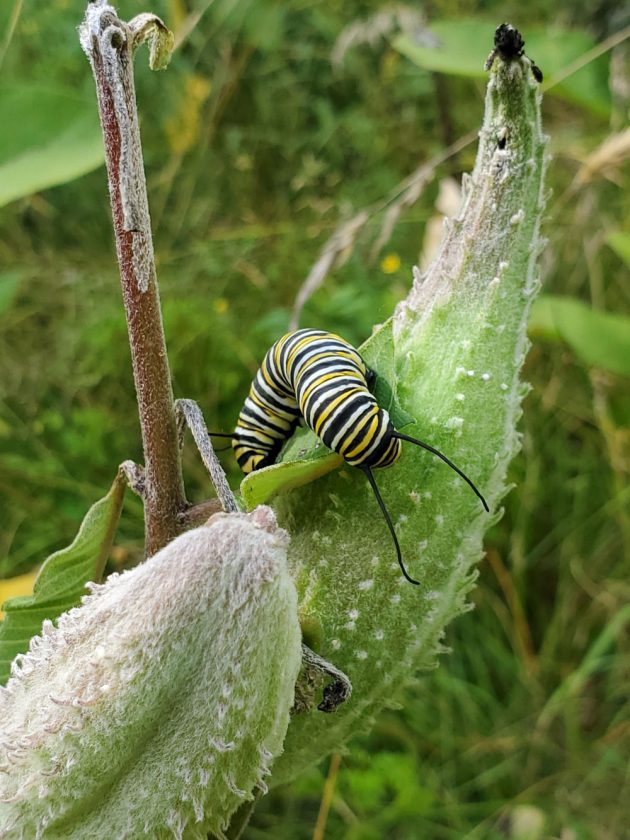 Monarch caterpillars feed only on milkweed, as seen here in Duane. (Photo provided by Richard Gast)

In early spring, the progeny of the Methuselah-generation monarchs will leave Mexico to complete the first leg of the journey north, arriving and breeding in the American Southeast. The brood hatched there will continue the migration northward, breeding along the way. It will require at least three generations of monarchs, each one traveling further north, to complete the migration from Mexico to the northeastern states and the provinces of southeastern Canada. They’ll arrive at the northern extremes of their range in late spring and early summer, and the cycle will begin once again.

Counting overwintering monarch butterflies is an inexact science at best. Technicians and scientist-scouts walk through the forest and, at each roost, map trees occupied by monarchs. According to World Wildlife Federation Mexico, last winter (2018-19), monarchs occupied just under 15 acres of oyamel fir forest in the mountains of central Mexico. While this may not sound like much, it’s the largest population seen overwintering since 2007, and an increase of 144% over 2017-18. Monarch hibernation colonies are so densely populated (5,500 butterflies per square yard, more or less) that the number of monarchs represented by this figure is … well … you do the math.

Anurag Agrawal, the James A. Perkins Professor of Environmental Studies at the Department of Ecology and Evolutionary Biology at Cornell University’s College of Agriculture and Life Sciences, writes, in an informal article posted on the “Insects on Plants, Chemical Ecology, and Coevolution” website of the University’s Phytophagy Lab, “The monarchs end up congregating in a tiny area, with the bulk of the butterflies concentrated among twelve mountain massifs (clusters of peaks) within three hundred square miles, an area smaller than New York City. In other words, most of the monarchs from eastern North America, from Maine to Saskatchewan, and south to Texas, probably covering two million square miles, funnel down and overwinter in a location 0.015 percent the area that they occupy in the summer! Unbelievable. This year’s estimate is well over double compared to last year. Great news for monarchs!”

In that same post, Professor Agrawal asserts that monarch butterflies “have been declining over the past three decades, and the annual announcement is a welcome addition to our understanding of the long-term dynamics of our beloved monarch.”

Jorge Rickards, managing director of WWF Mexico, attributes the population increase to, among other things, pollinator-friendly conservation initiatives along the international migratory path. 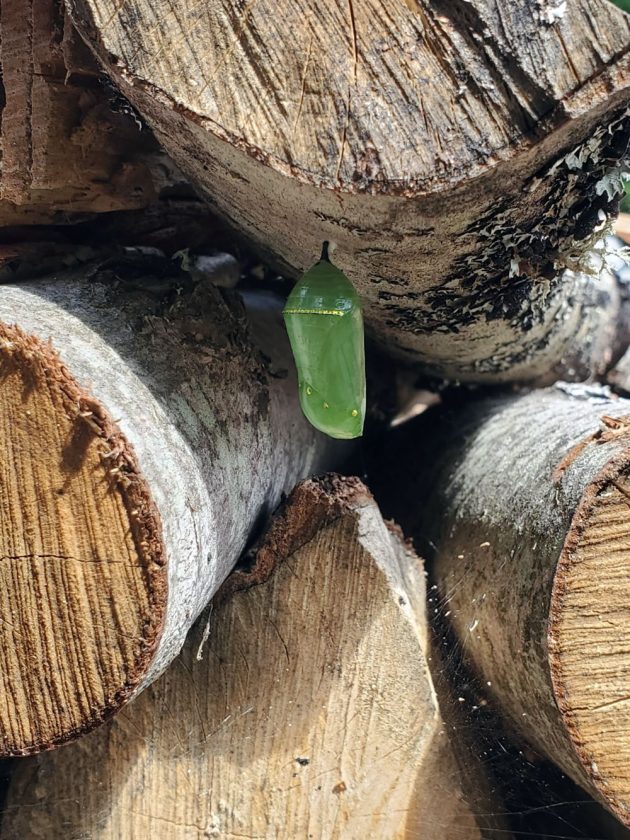 A monarch pupates in the relative safety of a firewood pile in Duane. (Photo provided by Richard Gast) 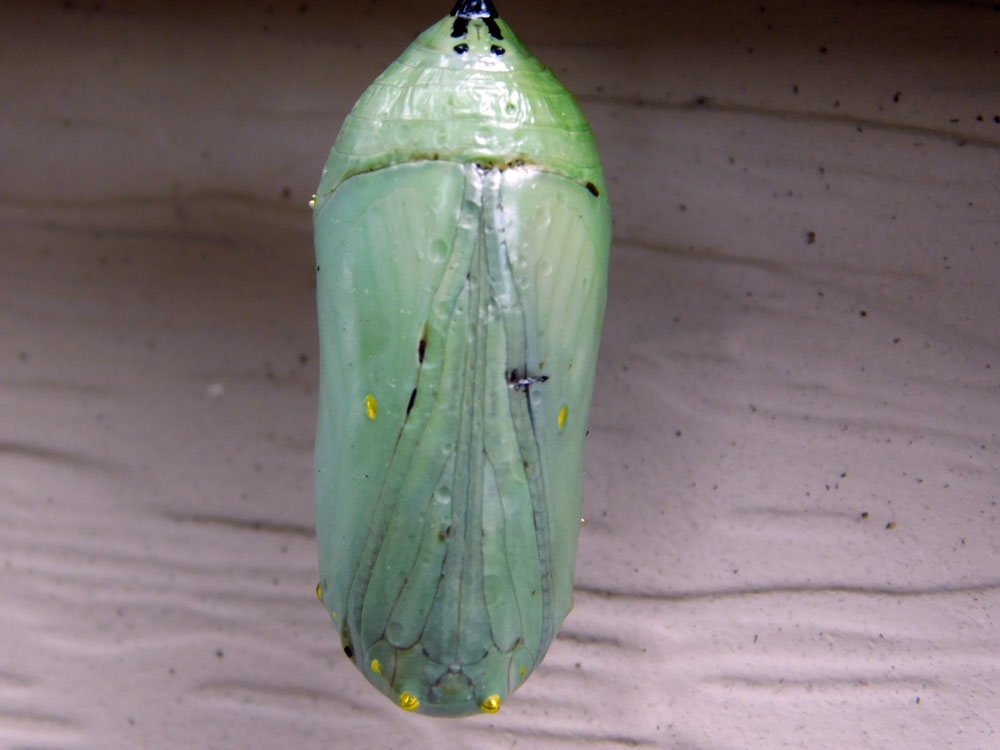 A monarch pupa is seen in the final stages of development before emerging as an adult (butterfly) in Vermontville. (Photo provided by Richard Gast)