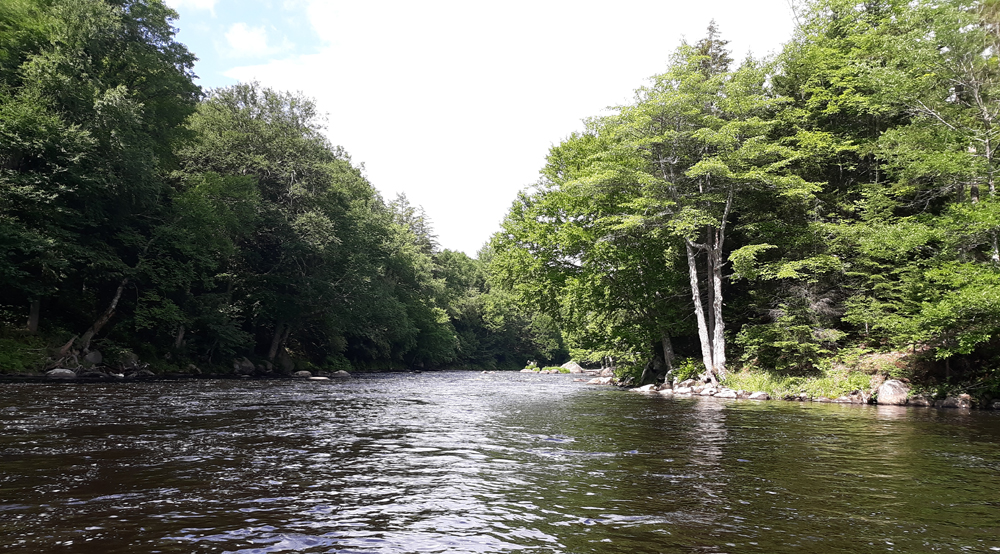 Franklin Falls Pond can be paddled comfortably up to where the Saranac River enters the man-made lake. (Enterprise photo — Justin A. Levine)

The Saranac River is a paddler’s dream, stretching 81 miles from the St. Regis Canoe area to Lake Champlain. And although there are dozens of lakes and ponds that contribute water to the river, two parts of the river were dammed more than 100 years ago.

In the early 1900s, Paul Smith — owner and purveyor of Paul Smith’s Hotel — saw the potential of electric power and built a pair of dams on the river, creating Franklin Falls and Union Falls ponds. Although each pond is part of the river, they’re big enough to lose the current and feel just like a natural lake.

We put in at the state Department of Environmental Conservation fishing access site, about halfway down the lake and hung a right to go “upstream,” though there was no noticeable current. Passing a couple of campsites along the way, my wife and I paddled the northwest shore toward Bloomingdale.

At the 0.75-mile mark, we passed a campsite on the right and entered the more narrow Saranac River where it empties into Franklin Falls Pond. From the looks of it, paddling upstream could be accomplished, but the number of rocks and obstacles, along with the strong current, mean that the casual paddler should turn around at this point.

Turning the canoe around, we went with the flow and followed the southeastern shore for about a mile. Swinging into the larger of two islands near the fishing access site, we got out and went for a short walk, during which we found a ton of broken glass and rusty nails (which we picked up and removed), along with the remnants of a loon nest and egg shells. We didn’t see any loons on the lake, but hopefully the shell fragments mean healthy chicks, and were not left over from a predator attack.

According to the DEC, Franklin Falls Pond is 2.5 miles long, but with a meandering shoreline, paddlers can cruise more than 8 miles along the lake. In addition, there are a few islands that can be explored.

The dam which Paul Smith built and impounds the river is at the northeast end of the lake, and is still in use for hydroelectric production. According to a 1987 article in the Enterprise, Franklin Falls used to have a different name and was once a bit of a booming community.

“While Capt. Pliny Miller was building his dam and sawmill on the Saranac River in 1827, a similar operation was under way 14 miles downstream at McLenathan Falls. Miller’s enterprise was destined to blossom into the Village of Saranac Lake, but the latter venture was doomed to join the ranks of the Adirondack ghost towns, a common fate for so many lumber settlements,” John J. Duquette wrote in April 1987. “When Isaac McLenathan and William Wells arrived on the scene, the falls had not as yet been named so McLenathan assumed the honor for himself.

“The mill site lay fallow for 15 years before two more entrepreneurs arrived to give it a try at the same location. John Fitzgerald and William McLean rebuilt the sawmill but chose to abandon the forge in 1846. One year later the pair was joined by Keese and Tomlinson from Keeseville but even this industrious foursome needed further help. In 1848 that help arrived in the person of Peter Comstock, an energetic organizer from Port Kent, who took over control of the enterprise. He immediately instigated an ambitious series of improvements and by 1851 had built a hotel, store, school, and housing for his work force. In that same year a post office was created with the new designation of Franklin Falls.”

However, a forest fire in the area wiped out the settlement, and while a popular hotel — the Franklin House — remained nearby, the hotel and surrounding area changed hands about a dozen times until Paul Smith bought the hotel in 1892. He and his wife Lydia had been married there in 1859.

“Paul had other plans in mind and he began buying up the surrounding property adjacent to the falls,” Duquette wrote. “By this time the mill and the little village had ceased to exist but the water power was still there. Paul recognized the possibilities of electrical generation long before most of his contemporaries, and he did not hesitate to act on his intuition. He had closed the hotel so that it could be used to house his work crew and in 1904 construction was started on a new dam and a hydro generating station. When the dam was finished in 1907, water flooded some state land and in 1908 Paul was hit with an injunction.

“After four years of litigation the judge ruled in favor of Paul Smith. On August 20th, 1912 Paul was able to celebrate his 87th birthday with a visit to his new hydro plant where he watched a huge generator convert water power to electricity. He had only four months left to enjoy the success which fledgling industry promised. He entered a Montreal hospital with a kidney problem and perished there on December 15th, 1912.”

Paddling on Franklin Falls Pond, with its history and largely undeveloped shoreline, offers a unique way to paddle part of the Saranac River while not having to battle the current.