Nothing beats a trip to the Sawyer Mountains 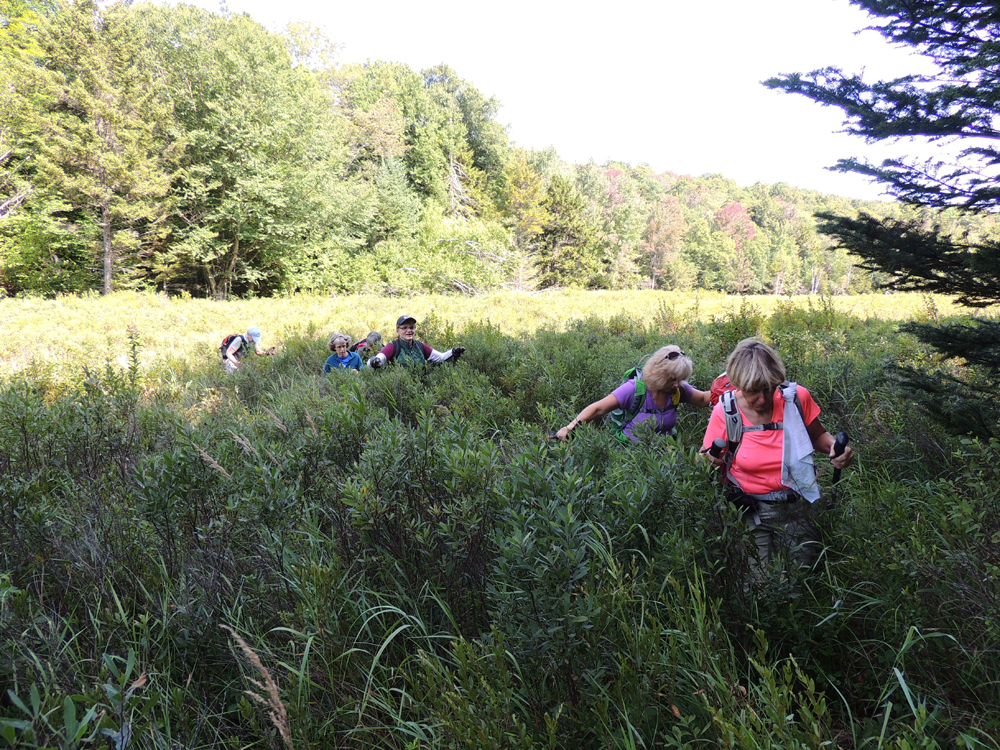 Hikers encounter a field of tall grass between the summits of Sawyer and Little Sawyer. (Provided photo — Spencer Morrissey)

Sawyer Mountain is nice, but Little Sawyer is where it’s at. Little Sawyer is a true gem in Hamilton County, and quite honestly I might be addicted to its summit, like a 2-year-old with M&M’s. I have been to these two peaks on several occasions, but looking back, the summer season was never one of them. I headed toward Indian Lake.

These two summits reside off of state Route 28/30 between Blue Mountain Lake and Indian Lake. The Sawyer Mountain trailhead can be found almost directly across the road from the Rock River Trailhead.

Little Sawyer sits hidden in the deep landscape, roughly three quarters of a mile away from Sawyer, which is a moderate 1-mile hike to its lovely lookout.

I wouldn’t call myself a lone hiker by any means, but there are times when finding a hiking partner is less than favorable. I guess it wasn’t always meant to be, but on this day I would be leading a trip there. I packed up my GORP (Gathering of Random Products), tossed my hiking pack together and hit the road. It was still dark when my tires hit the tarmac but it wouldn’t be long until the sun would come up over the horizon. We met up and reached the starting point for Sawyer Mountain at full sun-up.

Upon entering the trail, we were welcomed by a forest of mixed hardwoods dripping morning dew as we started our moderately paced hike toward the summit. The lower contours of the mountain are quite mellow, making for a quicker warm-up pace.

We soon found ourselves climbing the modest slopes over bits of open rock and dam roots to a cresting of a shoulder of Sawyer Mountain. The view is a bit lower than the high point of the trail, so we had to descend a bit to reach the overlook, which is just about big enough for two people to enjoy at a time. It was a bit like a waiting line at an amusement park.

Isn’t it amazing how views seem so much bigger as a child than as an adult? Also a misconception of this trail is how it, in fact, does not go to the summit. The true summit is a mere few hundred yards away, so we redirected there on the way over to Little Sawyer Mountain.

The open forest got us to the brushy summit rather quickly.

Little Sawyer Mountain is not officially named on most maps but on occasion you may see it on smaller distribution maps and in books, blogs or newspaper articles, as the case may be. Its contours can be identified on a USGS map just southeast of Sawyer Mountain.

The terrain was easy enough to navigate, in theory, but we did use the GPS to keep on course. We just wanted to head downhill along the ridge, mainly south, then east, then southeast.

The open forest continued and welcomed us with moderately steep terrain, but overall was a pleasant drop in elevation. Quickly we came to a valley between the two summits which was a most attractive field of tall grass with a soggy carpet. It was easy enough to cross, but the more vertically challenged in the group were practically engulfed in the height of the grass.

Eventually we knew we were at the slopes of the mountain; it was quite steep. This was the only real challenge of the hike, getting up past the cliffs. We soon found ourselves pushing through the few spruce trees near the summit before we popped out atop the long rock spine and the balanced boulder resting there.

The descent down would be more of a gradual trip as we followed the gentle north ridge. While rocky in spots, it is mainly an open hardwood stroll.

Per usual, the ridge is so wide it was tough to keep a solid bearing without meandering about. A close eye on the GPS was needed. Now half-immersed in the beauty of the area, we locked into natural conversation and time flew by. Before we knew it, we could hear the cars on Route 28/30 and then we could see the tarmac.

We popped out about a quarter of a mile from the parking area and gathered some fun looks from motorists — all good fun.