Improvements, history and a rude paddler 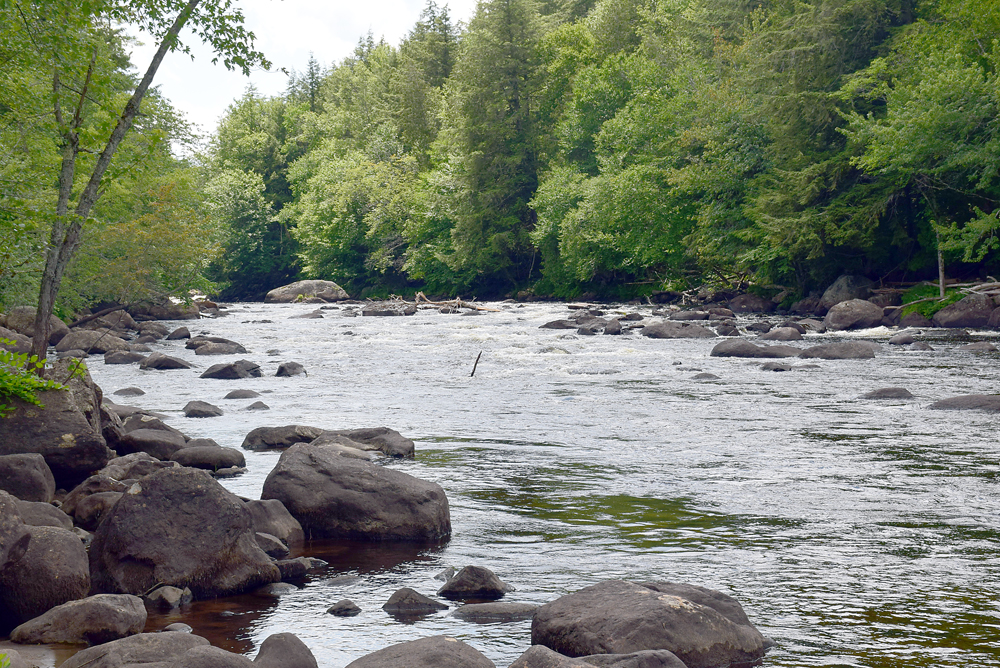 The Lower Falls on the Raquette River make a great swimming and picnic destination coming from downstream. (Enterprise photo — Justin A. Levine)

I pulled into the Axton Landing parking lot in Tupper Lake and was pleasantly surprised to see just four cars. With perfect weather, I expected more people to be out enjoying the water, and I was soon proven correct.

With my kayak sitting at the edge of the water, I loaded up my dry bag as a caravan of about a dozen vehicles pulled in. People and boats were everywhere, and as I picked my way through people and cars to the water, I watched as a man carried a two-person canoe toward my boat.

He and I reached the water’s edge at the same time, and before I could react, he dropped his canoe on top of my kayak. I told him he just hit my boat, and after a quick glance, he said “Which is yours? The Tupperware?”

Now, to be fair, my kayak is not super fancy. But I think the appropriate response to possibly damaging someone else’s property is to apologize. He did not, and this was not how I wanted to start my trek out to Raquette Falls.

From the put-in, paddlers should make a hard left to head upstream, and then continue for a couple hours. The bottom of the falls is almost exactly 6 miles from Axton Landing, which started out as a bustling little community.

According to Historic Saranac Lake, Axton was originally named Axetown, for the logging community along the Raquette River. A school and church were built for the families of loggers at the site, which was developed by Cornell University in 1899 as a forestry school.

However, the people running the Cornell forestry school had not been through Cornell’s business program, and after five years, the enterprise was abandoned as the school charged less for logged wood than it cost.

With the jerks behind me, I had the Raquette River to myself for a while. There was an occupied but empty campsite about a half-mile from the launch, and I didn’t see anyone for another half-hour. Soon the river was not quite crowded, but busy, as Boy Scout troops made their way downstream as I went upstream.

The current of the Raquette isn’t strong, but is swift enough to turn a boat around if you’re not paddling steadily. After a couple hours and more belted kingfishers and sandpipers than I could count, I soon heard the sound of the falls and of kids screaming. It’s a familiar sound in the summer, and I correctly assumed they were screaming in fun and not being murdered.

Pulling up to the sandy beach at the left side of the river, I got out amidst about 30 people and a dozen canoes as summer camps made their way around the falls. It was a pleasure to see snacks eaten and memories made.

Campers and counselors coming from upstream had disembarked and taken advantage of a recently rebuilt canoe carry around the falls. The Northern Forest Canoe Trail, which runs from the southern Adirondacks through Maine, had spent the better part of a decade improving the carry.

“The NFCT has been working at Raquette Falls on and off over the past eight years,” Noah Pollock, stewardship director for the NFCT, wrote in an email. “In total, we have spent over a month working to improve the carry and the adjacent Raquette Falls Vista Trail which provides access to Lower and Upper Falls. That trail has been the focus of our work the last two years, when we sent our four-person stewardship crew for six- and eight-day stints. The crew was joined by a cadre of volunteers over two weekends.

“On the carry itself in previous years, work has involved replacing a bridge, installing stone steps, and creating stone retaining walls. On the Raquette Falls Vista Trail, work involved extensive reroutes to avoid eroding and treacherous sections of the former route, a bridge, timber and stone steps, signage and drainage improvements.

“Work was done through a mix of our Stewardship Crew and volunteers. As the only dedicated water trail crew in the Northeast, NFCT’s stewardship crew specializes in projects at the interface of land and water, including campsites, portage trails, and access points,” Pollock continued. “We work with partners to implement projects along the NFCT and throughout adjacent waterways of the Northern Forest. Drawing on our extensive experience working in challenging, ecologically sensitive, and often remote environments, our crew implements practices that are flexible, durable and innovative. Our team generally consists of three college-age stewardship interns and an experienced crew leader.”

The sound of the kids and the falls melted away my salty feeling from earlier in the day, and I mentally planned a trip back to bring friends and family to go swimming. Despite the inauspicious start, the 12-mile trip to the falls and back more than made up for rude paddler.