From bridge to bridge on Two Bridge Brook 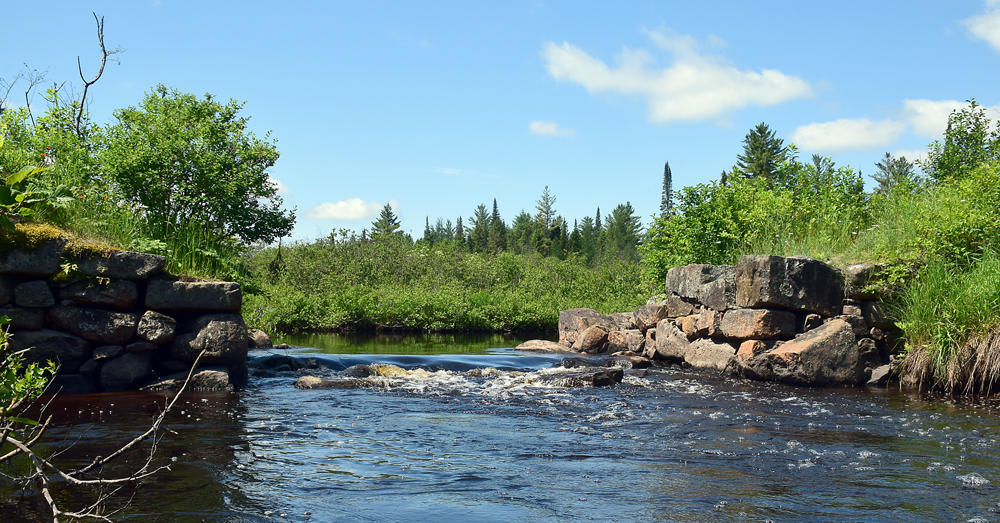 The remnants of something man-made are a good place to turn around after paddling much of Two Bridge Brook in the Bloomingdale Bog. (Enterprise photo — Justin A. Levine)

I’ve driven over the little bridge on Oregon Plains Road thousands of times. And while I’ve stopped there to fish a few times, I’ve never gone and paddled Sumner Brook.

So with a strong enough breeze to keep the bugs down earlier this week, I put my kayak in near the bridge and began to paddle upstream.

Sumner Brook, according to Historic Saranac Lake, is named after Uriah Sumner, who settled in the area and built a house, mill and forge around 1820. But Sumner Brook is only about 2 miles long, and is fed by a number of streams that drain the Bloomingdale Bog.

Paddling upstream from Oregon Plains Road, the muddy, winding water was moving briskly but not so fast that it was a struggle to paddle. With snags and rocks few and far between, Sumner Brook starts out as an easy paddle.

At just shy of a mile, Sumner Brook ceases to exist and becomes the separate streams of Lyon and Two Bridge brooks. My goal was to paddle up Lyon Brook to the Bigelow Road bridge, so I turned right at the junction into the much smaller Lyon Brook.

The shallow stream allowed me to go another one-tenth of a mile, where there was a very small beaver dam. With the dam rising only eight inches or so and a nice, sandy bottom, it would have been no trouble to get out and go over the dam. But birches and alders were growing horizontally across the stream as far as I could see, and it seemed like it would probably be more of a walk than a paddle to get to the defunct Bigelow bridge.

I turned around and made my way back to the junction, this time bearing right to go up Two Bridge Brook. Two Bridge Brook flows from the outskirts of Saranac Lake and roughly follows the Bloomingdale Bog Trail, passing under the trail at one point.

Two Bridge Brook had a strong current, and it was obvious that this is where most of the flow in Sumner Brook comes from. Although it was still relatively easy to paddle upstream, there was little opportunity to take a break without getting spun around and pushed back downstream.

There were a few tough spots, where the river channel was narrowed due to downed trees or large boulders. Pushing through took some effort, but I took comfort in the fact that my trip back to the car would likely be a breeze.

After 2.8 miles of paddling, Negro Brook came into from the right. Negro Brook used to have an even more offensive name, but was so-named due to some rather positive history in the area.

The abolitionist Garrett Smith at one point owned about three-quarters of a million acres in New York, and pledged to give away 120,000 acres of it to black families looking for a place to settle as the tension that would lead to the Civil War grew.

Smith’s most famous grant turned into the settlement known as Timbuktu, in Lake Placid. The abolitionist John Brown lived there and that is where he’s buried. According to Sally Svenson’s book, Blacks in the Adirondacks, Smith also gave land away in the area of Negro Brook.

I bore left at this junction, and within a couple of minutes I was passing under the Bloomingdale-Gabriels Road, which connects those two hamlets.

On the other side of the bridge, there is what appears to be the old foundation of a previous iteration of the road. One could carry over the small waterfall that the cut rocks create and continue on, but I opted to turn around and head back.

Going with the flow was much more relaxing. According to my GPS, I hit a top speed of 5.5 mph, and even when I wasn’t paddling the river was carrying me at between three and four miles per hour.

The parts of the river — riffles, snags and boulder fields — that were hard to get through on the way upstream made for a mildly exciting paddle on the way back. Although there are limited views along Two Bridge Brook, there’s wildlife and plenty of fish. Several times I was startled by a fish jumping out of the water just a few feet away.

This paddle can be heaven for bird watchers too, as there are a number of rarer species that inhabit the Bloomingdale Bog. I saw gray jays, cedar waxwings, a great blue heron and what I think was a swamp sparrow, but don’t know for sure.

The rest of the float back to the car was a breeze, and even though Sumner Brook can only be paddled for a mile, exploring its tributaries was a lot of fun.