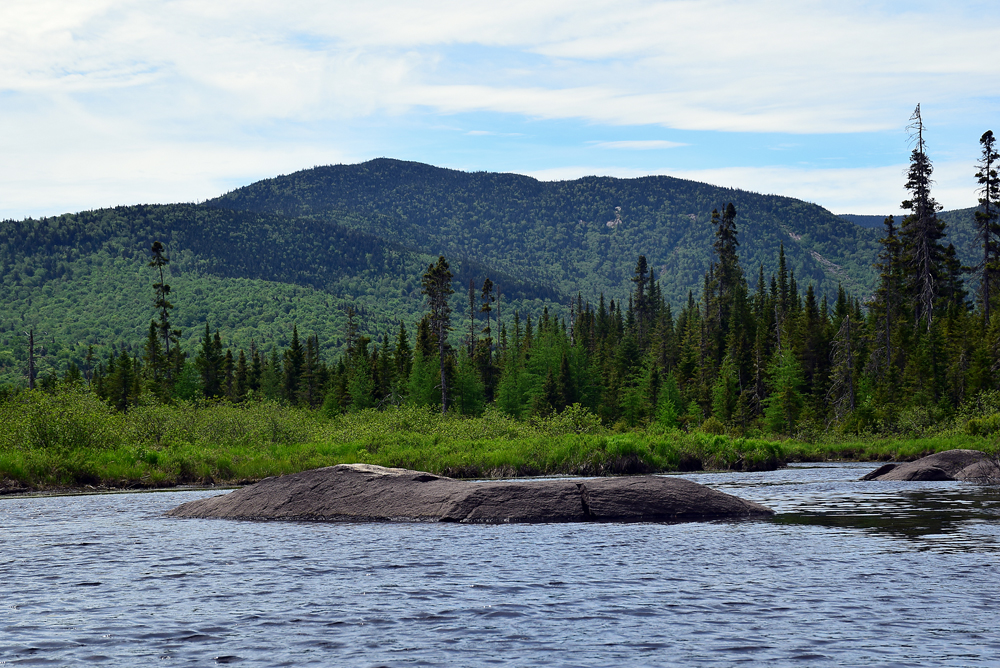 Street and Nye mountains — two of the 46 High Peaks — dominate the view from the Chubb River, outside Lake Placid. (Enterprise photo — Justin A. Levine)

LAKE PLACID — As hiking season heats up and parking lots begin to fill earlier and earlier, the High Peaks — with all their allure — may best be avoided during the summer crush. But there’s another way to enjoy the Adirondacks’ most popular wilderness, and that’s by boat.

There are not too many paddling opportunities in the High Peaks, but the Chubb River in Lake Placid allows paddlers to get into the High Peaks Wilderness Area while avoiding the headaches of parking and hiking.

The Chubb River has been used by northern Adirondackers for more than 200 years. The state Department of Environmental Conservation, in its unit management plan for the HPWA, said industry was already firmly entrenched by 1809, when an iron smelting operation was established on the river.

“Iron ore was soon discovered in the area, and in 1809, the Elba Iron Works opened on the Chubb River,” Laura Russell Viscome wrote in her book “Lake Placid.” “Within a few years, the local iron ore proved unsatisfactory. In 1816, the infamous ‘year without a summer’ brought freezing summer temperatures destroying crops and causing near starvation that winter.

“In 1817, the Elba Iron Works closed; most workers and all but a few farmers left.”

Nowadays, there’s hardly any sign of the river’s busy past. After a short carry from Averyville Road, paddlers will only go past one house, and that’s in the first mile. From then on, the river widens and narrows, gets deep and shallow and provides plenty of birding opportunities as it makes its way toward Street and Nye mountains — two of the 46 High Peaks.

There is a large beaver dam at the 0.75-mile mark, and then a dock and chimney mark the house. After that, the river narrows as branches creep in, but then the channel opens up again. At the 1.3-mile mark, a set of rapids prevents upstream travel, but there is a long-ish carry on the left bank. There are a couple of places to put in, but the end of the carry is at a wide-open spot in the river.

The river continues to make its way farther into the High Peaks, and ducks, herons and songbirds abound. From the end of the carry, the paddling is clear to just shy of the 5-mile mark, where another beaver dam crosses the river.

One could pull their boat across the dam and keep going, though the river at that point has a noticeably lower flow, and during late summer or a dry spell, paddlers may not even make it this far.

The Chubb River is named after an early settler of North Elba, Joseph Chubb. According to an article from the Lake Placid Historical Society, an 1804 map names the river as Pond Creek, but Chubb left his mark.

According to a March, 1982 article in the Lake Placid News, Chubb was one of the largest landowners in the area, but he didn’t stay long.

“Joseph Chubb had a great holding of 400 acres on Old Military Road from River Street to Carolyn Road, some of it later (became) the Ruisseaumont golf links,” the article says. “By 1804 he boasted a house and two barns and had cleared 27 acres, but abandoned the place before 1810. He, like Daniel Ray, left his name behind.

“Chubb River and Chubb Hill remind us that Joseph was here two centuries ago.”

The Clifford R. Pettis Memorial Forest between Ray Brook and Lake Placid also carried Chubb’s name until 1924, when the forest plantation was renamed for Pettis. Pettis was the superintendent of state forests under the Conservation Commission from 1910 to 1927.