Bear Mountain to Burnt Rock on a steamy day 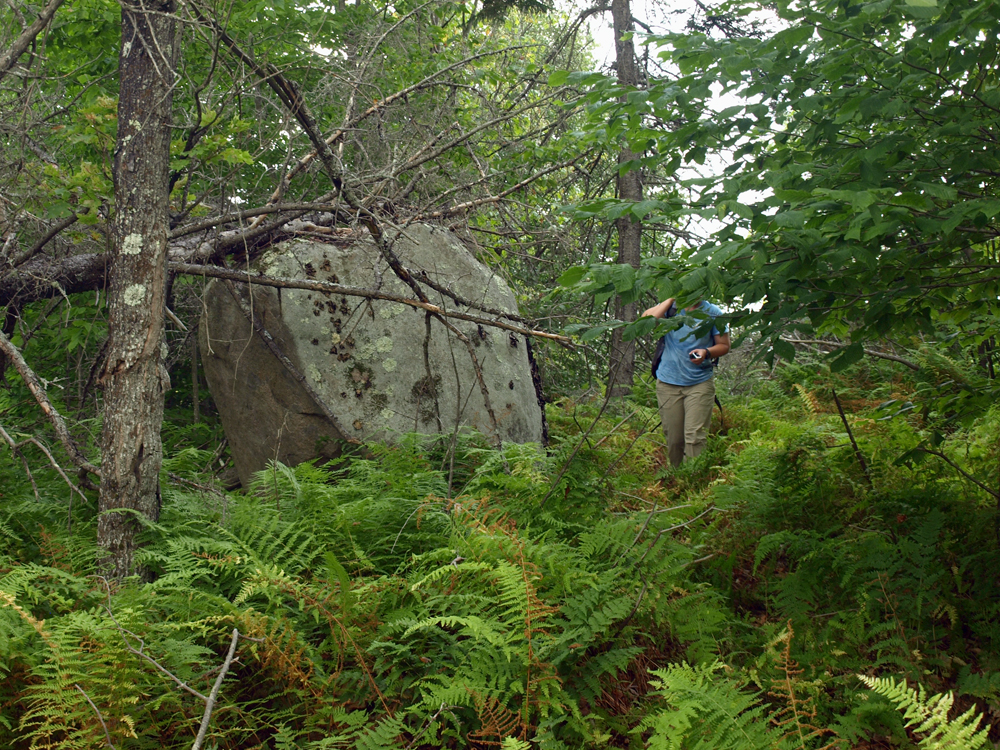 The path near the summit of Burnt Rock was overgrown and made for a challenge. (Provided photo — Spencer Morrissey)

It’s inspiring to visit an area that you have not fully explored. This is what drives you.

As mountains go, I can’t claim that the Cranberry Lake Wild Forest has tall-peaked summits, or wide expansive views from their tops, but they do create the foothills of the Adirondacks.

On this day, I was not in search of wilderness or expansive views, but more along the lines of just getting out to play in a part of the park I had not been in.

Sure, wilderness would be found, but so would sign of man. Then again, it brings to light the question: “What is wilderness?”

Wilderness is not just a land classification in a management plan, it’s much more than that. It’s whatever you want it to be.

Cranberry Lake, the fourth largest lake in the Adirondacks, stretches out below the ridge above a high ridge. (Provided photo — Spencer Morrissey)

For me, wilderness is different than what it might be for you. For me wilderness is getting off the beaten trails to see what lives where others do not frequently go, and that can be found in the classification of “Wild Forest.”

We started off at the Cranberry Lake State Campground, located right off Lone Pine Road in Cranberry Lake where the trail up Bear Mountain resides. I wanted to use this trail, not only to enjoy the wonderful views of Cranberry Lake from its trailside peep show, but also to access Burnt Rock.

Burnt Rock is a small knob on the shore of Cranberry Lake, insignificant as seen from the lake, but a summit I wanted to visit nonetheless.

The day was already showing signs of being hot and humid, and I immediately started to feel the effects. We moved briskly, and soon came to the lean-to located just below the summit ridge.

Relaxing in a cooler location, hydrating and finishing one of the four-liters of water we packed, I questioned if we would had enough for all three of us. Not long after we started up again, working our way through the switchbacks, through a valley of ferns and up to the summit of Bear Mountain.

The summit of Bear is not all that impressive, and if you didn’t know any better you would be highly disappointed in the outcome. But, the view is on the backside of the loop, and quite nice, worthy of doing the entire loop.

We passed by the large boulders that lined the trail, but not without a quick scramble to the top of one.

The views started to pop up through the trees in the open fields along the ridge, but it was important to descend a bit farther along the trail to come to the rocky resting place and the view out over the fourth largest lake in the Adirondacks: Cranberry Lake.

Not far from this view, is where we left the trail and started to bushwhack (precisely where the trail makes a hard turn away from the direction of Burnt Rock).

For those of you not wanting to do the off-trail portion of this, the trail continues down to the opposite side of the campground over a steep and, at times, slippery descent. From there you will be about a mile from the trailhead you started on. We would come back to this spot later in the day, but first: Burnt Ridge.

The forest was open, ferns greeted us in open fields of deep greens and small rock lips gave us a bit of a scramble to descend. The descent was a bit awkward for footing in some areas, and as such we needed to hike on a side hill for a while to get heading in the right direction.

Tall bundles of interrupted ferns welcomed us into the damp valleys where we waded through a bit of muck and boot-sucking earth in a semi-liquid state. Then we could see it: Burnt Rock a bit in the distance, looking in its true form as a hogback rather than a stand-alone hill.

In our path was an old beaver wallow, now partially dried up with a stream running through it, which wasn’t a difficult operation to get over.

Burnt Rock was now overhead, actually towering above us. Its impressive rocky outcroppings made for a bit of a steep scramble for the short distance it would take to conquer the summit. We pulled ourselves up over each rock shelf, as moist lichens slipped under our boots.

The next battle was through the massive amounts of sharp, pointed deadfall before reaching the top. Fully wooded, as I suspected, although I had hoped I was wrong.

A small bump on the ridge was our only hope of a towering view out over the lake. It was a quarter-mile away, through more deadfall and ferns. And, as with the first, this proved to be lacking in view.

The lake was now right below us and the small nipple on the point drew us down to the water’s edge. The descent was almost non-existent and in a couple minutes we stood at the shore. The views out over the lake were superb, and a sand beach under our feet was the payoff of the day.

Now only a few hundred feet from campsite #2 on Cranberry Lake, was where we found a nice red-dot painted trail that led us back up the mountain. As we climbed, we took many breaks and finished off water bottle number three on a small rock outcropping that overlooked the lake.

From here, it was steep and followed the fall-line of the mountain. And whaddya know, it came right out to where we started the bushwhack.

We had to now finish off the Bear Mountain Trail as it descended steeply back down toward the valley. The walk along the campground roads felt good on the legs to once again have solid ground beneath us.