High-water moments on the Saranac River 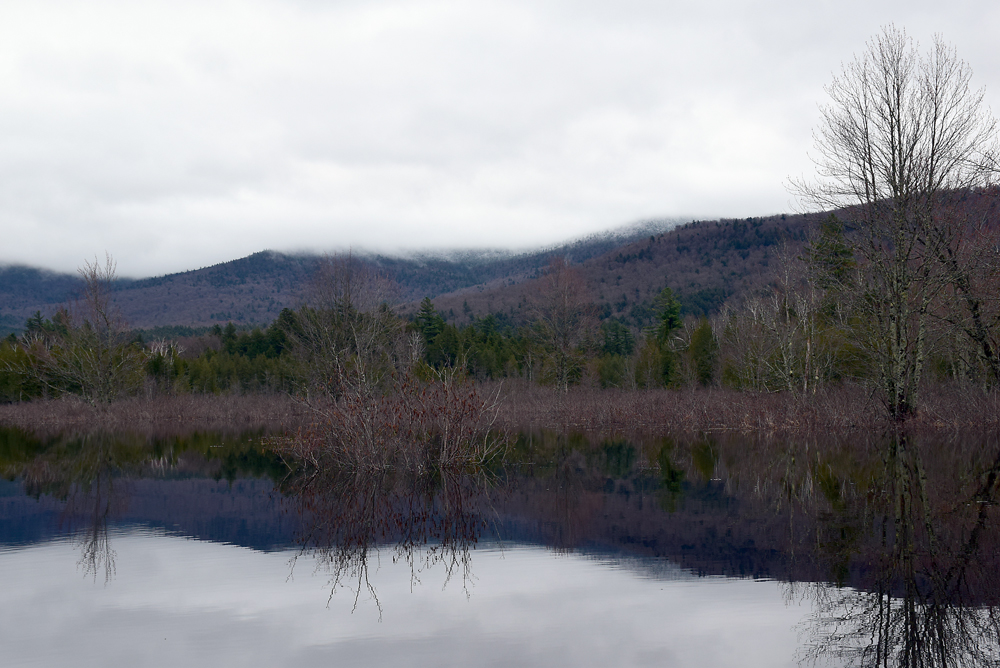 A light coating of snow lines the upper reaches of Moose Mountain, as seen from Moose Pond Creek off of the Saranac River. (Enterprise photo — Justin A. Levine)

The Saranac River can be paddled much of the year, including late in summer when water levels are low. But with the high water of spring flooding the river and its low-lying areas, it seemed like a good chance to get out and explore a little.

My friend Jason and I set out from Pine Street in Saranac Lake, hoping to make it to the high water takeout along the Franklin Falls Road before his wife met us to shuttle us back to town.

We set out on a colder than expected morning, donning gloves, jackets and PFDs as the swift current of the river began to push us downstream. We paddled and talked for a while, with a plan to take out for a brief break at the metal bridge at the beginning of the Moose Pond hiking trail. But within a couple of miles, a tempting detour took us off course.

Floating downstream toward the river’s eventual terminus at Lake Champlain, we hung a right and began paddling into Moose Creek, the outlet of Moose Pond. With the water high, we weren’t limited to staying within the channel of either waterway, and were soon cruising upstream over the top of a variety of wetland plants.

A belted kingfisher, a small bird with a large head and beak, danced from tree to tree and flew by our canoe a few times. We kept pushing up Moose Creek (with a paddle, luckily), wondering if we’d be able to make it all the way to the pond. However, with a ride set to pick us up at a certain time, we went about a mile up Moose Creek before turning around to head back to the Saranac. The kingfisher stayed in front of us and perched in the top of a dead tree, showing off by silhouette its “air of self-importance.”

“With its top-heavy physique, energetic flight, and piercing rattle, the Belted Kingfisher seems to have an air of self-importance as it patrols up and down rivers and shorelines,” the Cornell Lab of Ornithology says. “It nests in burrows along earthen banks and feeds almost entirely on aquatic prey, diving to catch fish and crayfish with its heavy, straight bill.

“Its large head and hefty bill give it a distinctive profile as it patrols its territory, using the open space above the water as a flyway. They also perch on riverside branches and telephone wires. Belted Kingfishers also make long commuting flights over fields and forests, far from water, so be prepared for the occasional surprise flyover wherever you are birding.”

Making our way back to the Saranac, we followed a row of red maple trees protruding from the water, as the channel was hard to follow. The river pushed us downstream, but not so fast that it was dangerous. We had decided to bring Jason’s heavy canoe, partially because it’s shorter and more maneuverable, but also because it can withstand more of a beating than a lightweight canoe. That’s an important thing to consider when you’re gliding along outside of a river channel where rocks, stumps or downed trees can rise up out of nowhere.

Stopping at the hiking bridge to Moose Pond, we had some tea and coffee and decided that rather than launch again on the upstream side, we would simply slide the canoe across the trail and head downstream. Part of our calculus on that decision was a small jon boat that was visible from the hiking bridge.

The boat was standing vertically, with its bow underwater and the stern about five feet up in the air. The boat was pinned against a tree that way, and it just seemed like the more prudent move to not put ourselves in a situation where we could end up like that.

After another mile or so of easy going, the river narrowed some and we came around a bend to find most of the river blocked by a maple that had fallen from the left bank across the river. This tree presented a problem, as the river was moving fast on the outside of the bend and stretched out into a wetland on the inside.

This meant there was no good place to disembark from the canoe, so we held our position in the river while discussing what to do.

We finally nosed our way up to the tree, and since I was in the front of the boat, I stashed my paddle and moved us slowly through the crown of the tree until we were downstream and in the clear.

From there, it was smooth sailing until we got into Bloomingdale, where houses began to occasionally dot the river bank. I knew that the Moose Pond Road bridge, which is open to traffic and serves a number of houses, was well above the river. What I didn’t know is that the underlying structure of the wood-decked bridge reached about eight feet or so below the decking.

Coming around a corner in the river, we saw only about 18 inches of space between the bottom of the bridge and the surface of the river. Not wanting to risk flipping the canoe in the frigid water, we back paddled and pulled out on the side of the road.

Just as we started to talk about how late we were for meeting Jason’s wife Karen, she rolled up in the van, kids in tow, thinking she had some time to kill. It took about two seconds for us to decide to call it a day right there, and with a few hours and 9.5 miles under our paddles, we chalked the trip up as a success.