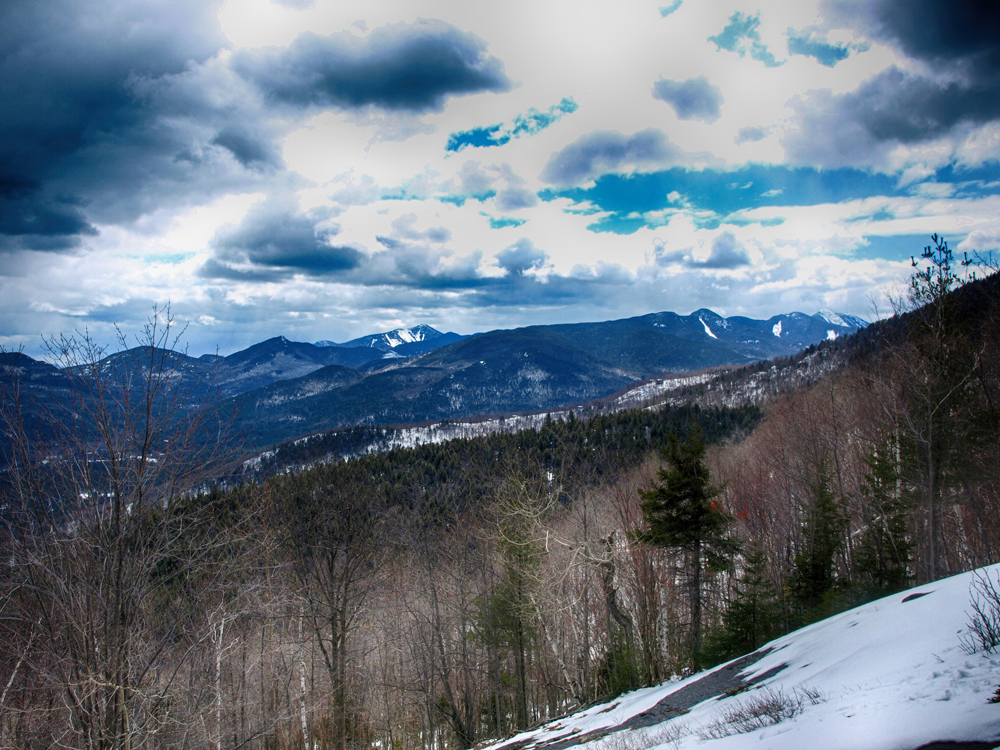 The Great Range of the High Peaks comes into view during the hike to Blueberry Mountain. (Provided photo — Spencer Morrissey)

I have lived in the Adirondacks all my life, and never at any moment resided too far from the High Peaks Region. But, for some reason, I had never climbed Blueberry Mountain from the Marcy Field trailhead.

I have, of course, descended down from “the blueberry” a few times while hiking through from Cascade and Porter, but up it? Nope.

I figured since the cross-country skiing isn’t so great right now, I should introduce Corenne to the peak before the rain settled in for a month-long stay and what snow we had left turned into some form of instant mashed potatoes with mud gravy.

We started out on semi-hard ground, with barely a spot of snow to be stomped. But it wasn’t long before we would have to break out our microspikes to battle the increasing ice flows being created by the on-again, off-again warm weather.

I remembered from previous trips over the peak that the descent from Blueberry was impressively steep over a short-distance, and relatively quick. I imagined the climb to be of opposite fate.

It was not too long before more snow began to show up on the trail — and by more snow, I mean a couple of inches. However, the slip and slide the snow created on the hidden ice was the making of a masterful drunken walk.

Then, oddly enough, it began to snow. At 40-plus degrees, SNOW. I think there may have even been a clap of thunder snow, but if so, it was only one.

Eventually, we were at the base of the slab rock and the sun started to peek through the clouds, warming our legs beneath our black pants. The slab rock, while steep and unstable with rotting ice, offered us great views of the High Peaks. Way off in the distance, between Hurricane and Knoblock mountains, sat the Green Mountains of Vermont, also shedding its white cloak.

Once atop the rock slabs, we re-entered the trees only to find very deep snow and a deteriorating base forming right in front of our eyes in the form of the dreaded “snow-spine.”

We soon came to another viewing area, then another, then another and my mind started to second guess itself. Was the summit not how I remembered it? Was this just a false summit?

Then, there in the distance with a beam of sun, sat the apex I remembered. We finally turned the last corner, punched through a 3-foot snow drift, and hopped up the last small rock brim. We stood next to the summit erratic enjoying the vast views that Blueberry Mountain offers.

We had just about enough fun for one day. Even if we wanted to venture on farther, we would have had to break out the snowshoes, and that just didn’t sound like fun. As it was, we carried them for the duration, like small children on our back.

The descent was fast and filled with taxed muscles as we fought for every step to not slip on the ice. Trees became our dancing partners, and our butts often became the mode of transportation.

We actually made rather good time, and once we got our knees to stop acting like Jell-o, we could glissade a step or two. Microspikes had become trip hazards, so those came off rather quickly. Of course, Noonmark pie is a waist hazard, but that didn’t stop us either.