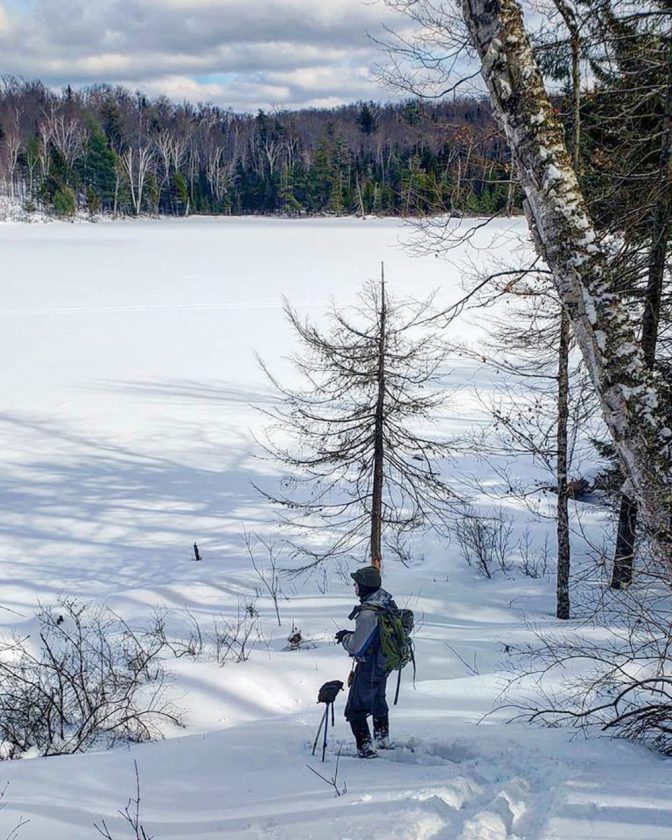 John Pond is an odd-colored gem in the backcountry of the Siamese Ponds Wilderness, whose shores and waters are split by Hamilton and Warren counties.

According to the “Property Rights Foundation of America,” John Pond gained its name from a Canadian, John MacKenzie, who moved to the area around the time of the Civil War. However, it is not completely conclusive that MacKenzie is the correct surname. During the time of the naming it was more commonly known as “John’s Pond.”

The loop starts and ends on Wilderness Lane in Indian Lake. In Indian Lake follow state Route 30 toward Speculator and continue for just over a half-mile to Big Brook Road on the left. Turn down Big Brook Road for 3.6 miles. Turn left onto Starbuck Road for 0.4 mile. Continue straight onto Lakeview Drive until it dead ends into Wilderness Lane. The north trailhead is at the intersection. For the south trailhead, turn right on Wilderness Lane, turn left onto the forest road and continue about a tenth-of-a-mile to a small grass lot and the trail register. In the winter this is a snowplow turnaround, you will need to park roadside in a safe location.

We parked at the north trailhead and walked the road to the south trailhead to begin a journey through “Little Canada” (more on that in a bit). The trail was in superb condition thanks to three snowshoers pulling sleds to camp on John Pond. I should buy them a brewski one of these days.

The trail passed before us like a gateway through massive red pines. With John Pond Brook flowing ever so silently to our right we had the wilderness to ourselves.

This sign on the John Pond Loop trail is the gravesite of Peter Savarie and Eliza King, who died from the black diphtheria epidemic of 1897. (Provided photo — Spencer Morrissey)

It wasn’t long before we were at the 100-yard spur trail for the gravesite of two unfortunate souls — Peter Savarie and Eliza King (half-sister and brother) — who perished from the black diphtheria epidemic of 1897. They were residents of the small logging town called “Little Canada.” Most of the settlers were from Canada and came to the township to work for companies during their logging operations. Eventually, the land was sold to the state of New York and the families were evicted. The history of the area is quite rich and surely a deeper subject for another time.

After visiting and paying our silent respects, we continued on to John Pond. The trail continued to pass over undulating hills as Jimbo, one of the ducks on this hiking party, told stories only a fool would believe — but then again, look at his company. We soon stood on the shores of a pond, whose brown hue in the summer was veiled in a perfect sheet of white.

From here, we did not finish the loop, instead deviating a bit from the trail to reconnect with it at Clear Pond. For those of you wishing to do just the loop, it is quite a pronounced trail to Clear Pond with a continuance of rolling hills — quite a nice walk indeed.

We aimed for the cliffs, referred to as John Pond Ridge. Clearly they were seen from the lean-to and we aimed for the southernmost. The crossing of the outlet was minimal, but the snow was not. While other parts of the Adirondacks had a solid crust worthy of support to a larger hiker like myself, Indian Lake did not, the calories would peel off in sheets.

The climb was steep to the south end of the mountain, but in taking turns with the course-load, we managed it in rapid time. The views were astounding, and there were more to come.

We would climb, drop, climb, drop and continue on this repetitive line along the entire ridge of distinctive summits. The step from Warren County to Hamilton County was, well, undramatic and this happened in the center of the ridge. Not that we expected to feel like we drove over a speed bump, but maybe a blaze on a tree or something. Nope, just more rocks and trees. In fact it looked identical (go figure).

The highest summit of John Pond Ridge was dramatic, however. The “knife edge” on the south side of the summit opened up vistas that ranged all the way from Bullhead Mountain to Snowy Mountain, a massive 200-plus-degree view. The rock shelf at the summit was outstanding as well, reaching views up toward the High Peaks.

We finished off the ridge by passing over the open rock of the northern summit and down to Clear Pond. This traverse is one of the finest in Indian Lake. Bushwhacking and navigation is not in everyone’s comfort zone, but if you can manage or find someone to go along who can, it is worth every inch of travel.

We hit the loop trail on the west side of Clear Pond, which is aptly named for its clear waters, but its white cloak only made it look like an open field. This side was also well-traveled and in this frequent visitation, allowed us a broken trail, and a welcomed easy stroll, mostly downhill to our vehicle. We had just traversed what I felt to be true wilderness, a wonder in the Park we all so dearly cherish.

Spencer Morrissey is an author and licensed guide who lives in Long Lake. His outdoors column will appear regularly in the Adirondack Daily Enterprise and Lake Placid News. He can be reached at adkpeaksurvey@gmail.com, or through his Facebook and Instagram pages “adkpeaksurvey.”