High Rock side trip worth the diversion 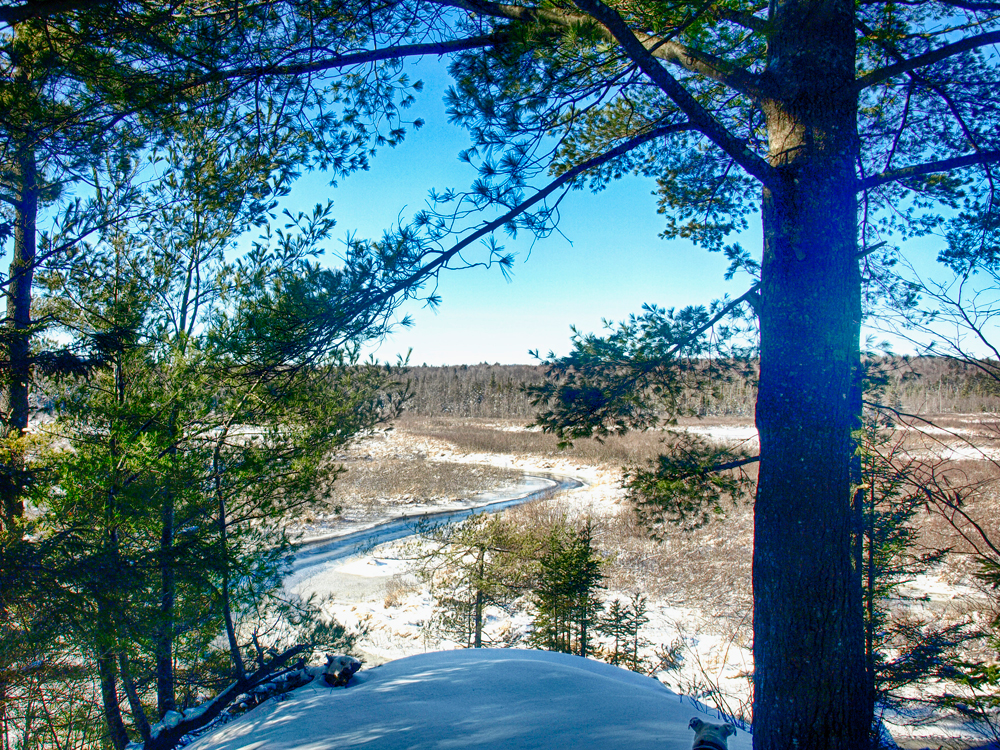 The Oswegatchie River comes into view from the top of High Rock in the Five Ponds Wilderness Area. (Provided photo — Spencer Morrissey)

The snowpack in the Adirondacks was steady this winter, making the skiing quite good for much of the season.

This was especially the case in the Five Ponds Wilderness Area. A couple of the access trails into the wilderness follow old railroad grades from the time of the Rich Lumber Company. The ties and tracks were removed long ago and these hiking trails are wonderful ski destinations.

It’s not so much the flat terrain that makes them a nice ski, but the fact that a large portion of the trails are out in the open with little to no canopy cover. This allows more snow to reach the ground and create a nice early base, and it also allows skiers to take full advantage of even a little bit of powder.

High Rock was our destination, and as part of the High Falls Loop, this section probably gets the most use from cross-country skiers. Past High Rock is a different story and from year-to-year its frequency of use varies.

The day was looking bluebird perfect, and that bright circle in the sky was a warming sensation to our minds, especially after coming out of a several day stretch of dull, gray surroundings. I could almost feel the vitamin D flowing through my bloodstream.

At the trailhead we were not surprised to see that others had been skiing as recently as that morning. We passed immediately through the open vistas of Skate Creek, and for once we didn’t have to worry about the beaver activity that so often floods the region and our boots. Under a completely frozen layer of ice and snow we skied right over it without as much as a cracking sound.

Soon we found ourselves passing the Leary Trail with my mind wandering about visiting Round Top. This trail was once a shortcut to reach Five Ponds by removing more than a mile of the current trail from the equation. However, when the 1995 microburst came through, it leveled many acres of the Five Ponds Wilderness Area, including this trail. The devasted trail was abandoned and left for dead, however, local life-support is managing to revive it once again.

It wasn’t far past this point where some bare sections of ground started to appear, and the previous skier didn’t want to bother finding a way around. It’s just part of game and the adventure of it all.

Soon, the marshy inlet of the Oswegatchie River opened up to the sun again and gave us nice vistas across the way, kind of flushing our minds of the mental toxins that life can pollute.

Soon, the summit of High Rock started to appear above us on our left. We’d venture there in a bit, but first we wanted to reach the High Rock Camps above the river. The camps along the river are what most consider High Rock, which makes sense since they are on a “high rock” above the river. However, the map says differently and labels High Rock as a small knob just off the trail.

The camps are only a 10th-of-a-mile off the main trail, and why anyone would skip out on it is beyond me. The view out over the Oswegatchie River is tremendous, only bested in the fall under a veil of color.

About a quarter-mile from the intersection is where we decided to ski back to and have a go at High Rock’s summit, which is only about 200 feet higher and just over a 10th-of-a-mile.

This was the added part of the adventure — something we often do — but the ski alone is an amazing destination. We didn’t bring snowshoes due to the short distance from trail to summit, and with the solid crust we didn’t think we’d need them. The need in our mind didn’t outweigh the fact that we’d have to carry them on our backs for the entire ski.

We removed our skis, stashed them off the trail, locked to a tree, and started the very steep climb up to the open rock face we could see from the trail. The crust was very hard and perfect to kick into on the steep climb. It wasn’t long before we stood beneath the small cliff. Not much longer from that, we were atop it. We had filtered views of the river through the leafless winter trees.

It wasn’t far to reach the true summit, but we would have to go along a nearly flat ridge that was densely populated with pole-sized hardwoods. As I mentioned, the area was hit hard by a microburst so the trees we now see are around 20 years old or less.

The ruin could be seen in the cordwood-stacked dead trees along the ridge. Up and over each and every one we reached the top. The summit was a wooded castle giving more filtered views of the region.

We don’t climb for the views, but yet you wouldn’t find us complaining if we found some. We love the discovery of it all, the lure of finding something new, and the simple pleasure and thought that only a few other may have ever stepped foot there.

We returned to the trail by following our tracks up, and within 10 minutes of leaving the summit we had our skis back on and were kicking it back out to the trailhead.

Now we had a broken path all the way out, and most of the exit was downhill, making our retreat to a hot toddy an easy one.