Time is short, and so are these trips

Audrey Levine and Baylor Karger, of Vermontville, take in the view of Snowy Mountain and central Adirondacks from the summit of Watch Hill, near Indian Lake. (Enterprise photo — Justin A. Levine)

Although this summer seemed hotter than normal, everyone I talk to still doesn’t want to think about winter coming. But the leaves are changing and the days are shorter, so whether we want it to be or not, fall is upon us.

But there’s still time to get out on the water or take a quick hike before you’re stuck shoveling snow, so here are two quick trips — a hike and a paddle — that you might have time to enjoy before busting out the skis. 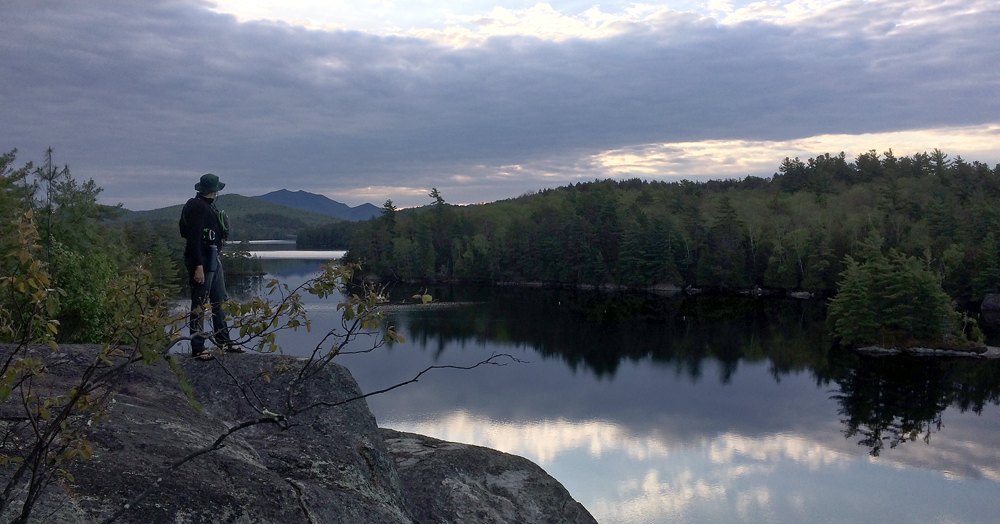 Jason Labonte, of Saranac Lake, looks out over Lower Saranac Lake from atop the cliff on Bluff Island. (Enterprise photo — Justin A. Levine)

The North Country is home to incalculable paddling adventures, but one right outside of Saranac Lake offers the chance for a quick hike around a large island, as well as views from the tops of roughly 70-foot high cliff.

Bluff Island in Lower Saranac Lake used to be part of the Saranac Lake Islands campground, but there is no longer camping allowed. The island — at former campsites — has some picnic tables, and with two possible routes, a paddling excursion can be either quick and easy or a little longer.

The island, as its name suggests, is home to a couple of rock bluffs that are popular hangouts. Canoes and kayaks can be pulled out in any number of places, and a short network of trails connects two of the the bluffs and a couple of former campsites with each other on the eastern end of the island.

The highest cliff face is about 70 feet high and from there, views can be seen of McKenzie and Ampersand mountains, as well as a view up and down the lake.

To make this a shorter paddle, go to the state Department of Environmental Conservation’s Second Pond boat launch on state Route 3 outside of Saranac Lake. From the launch, paddle under Route 3 going northwest. Go through the channel, and you come out onto Lower Saranac Lake pretty much right at the biggest bluff on the island.

For a longer paddle, use the DEC’s Ampersand Bay boat launch and paddle generally southwest for a little more than 3.5 miles. There are a number of islands in the middle of the lake, and a map should be used to determine where Bluff Island is.

DIRECTIONS: From the intersection of Main Street and state Route 3 in Saranac Lake, take Route 3 toward Tupper Lake for 4 miles and turn left into the Second Pond boat launch.

Many hiking trails are little more than a way to get to a mountain summit or scenic view. So when the trail itself keeps you entertained on the way to a vista, that’s a real treat.

Watch Hill, south of the village of Indian Lake in the central Adirondacks, is one such trail. Although, there are three approaches to the short mountain, so I can only speak to one of those.

The DEC, within the last few years, built a trailhead for Watch Hill after it shared the often overflowing parking area for nearby Snowy Mountain. There is also a short trail from the shore of Indian Lake that leads to the top.

From the new, southern trailhead, a path goes through the woods to an old road. After turning left on the old road, the trail then turns right at the 0.55-mile mark and hangs a sharp left at 0.66 miles. Some guides say there is a shorter, but much steeper trail at this turn, but a quick look around revealed no marked trail, while the cliffs covered in dirt and dead leaves also looked unpromising.

After going left to skirt around the cliffs, the trail utilizes a few switchbacks to gain some elevation at a reasonable grade.

The Watch Hill trail, which has red DEC trail markers, crosses a blue-marked ski trail just shy of a mile in and continues up at an easy grade. The trail follows an exposed rock vein at 1.15 miles as a view of nearby Snowy Mountain and its fire tower are seen on the right. Although the summit is mostly treed, a large rock ledge at 1.3 miles provides limited views of Indian Lake (the lake, not the village), Snowy Mountain and the surrounding area.

While Watch Hill is an easy, family-friendly hike and not much of a challenge, its location in the central part of the Adirondacks means that it’s a good spot to get out of the car to stretch your legs. The trail has a little of everything, except a steep section, and is a pleasant walk in the woods to some one-of-a-kind views.

DIRECTIONS: From the south: From the intersection of state Routes 30 and 8 in Speculator, take Route 30 north toward Indian Lake for 15.5 miles to the trailhead on the right.

From the north: From the intersection of state Routes 30 and 28 in Indian Lake, take Route 30 south toward Speculator for 7.8 miles to the trailhead on the left (0.9 miles south of the Snowy Mountain trailhead).

Broadway lot up for public auction