Adventure in a remote wilderness 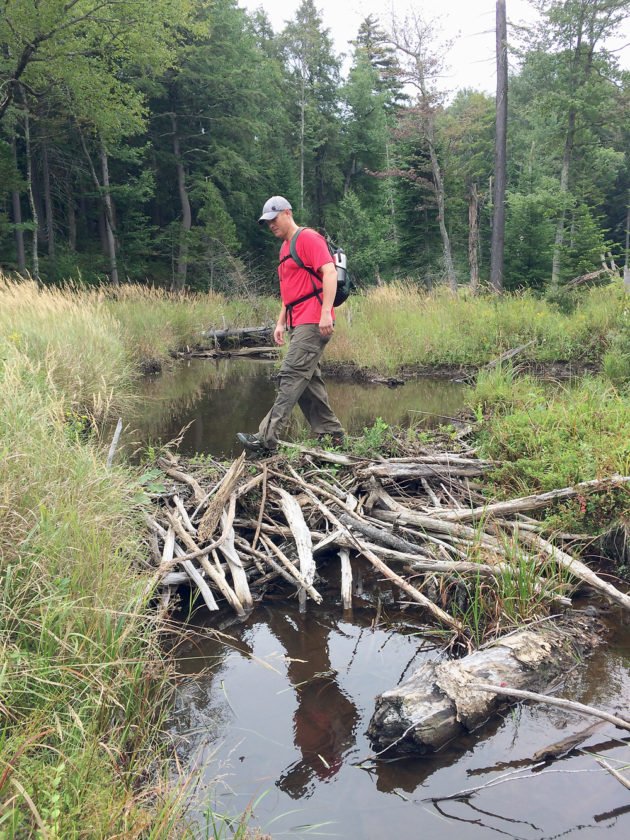 Christian Wissler, of Saranac Lake, crosses an old beaver dam in the middle of the McKenzie Mountain Wilderness Area on Tuesday. (Enterprise photo — Justin A. Levine)

Sometimes a hike has no view at the end. Sometimes there’s clouds or trees blocking the vista. And sometimes, you just run out of time before getting to where you wanted to go.

That was the case earlier this week when my friend Christian Wissler and I ventured into the heart of the McKenzie Mountain Wilderness Area for a bushwhack to the Moose Mountain slide.

Moose Mountain is big — almost a High Peak at about 3,900 feet in elevation — and on the northern slopes there is a prominent rock slide that can be seen from around the area, especially Moose Pond near Bloomingdale.

Christian wanted to get to the slide, and with no trails to be seen for miles, we planned on an early start and picked a turn around time of 10:30 a.m.

So before 6 a.m., we took the canoe off my car and launched it on Moose Pond, setting out for where the Grass Pond Outlet feeds into the larger lake. Even with a moderate fog holding the sunlight at bay, we found the stream among aquatic plants, alders and stunted cedars. 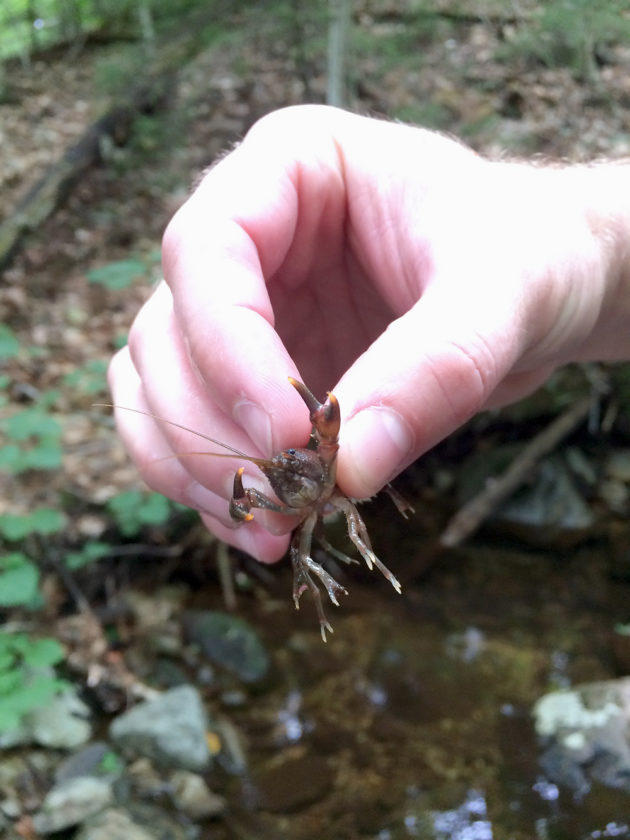 This crayfish, which was found in a small stream well over 2,000 feet in elevation on Moose Mountain, made itself look big by spreading its claws. (Enterprise photo — Justin A. Levine)

We pulled the boat up alongside a dead tree and hopped out, walking the log to a dry spit of land where we checked gear and stashed the stuff we wouldn’t need. The canoe got flipped over so it wouldn’t blow away in the increasing wind, and we began the bushwhack.

It wasn’t that hard to follow the stream, even as it meandered through a marsh. The woods on the north side of the stream were old, with large maples, beeches and yellow birches mixed in with some hemlocks. The undergrowth — mostly witch hobble — was easy to navigate and we made sure to keep the stream in sight.

After about a mile, we crossed the stream and I found the first sign of humans as I pulled an old broken glass bottle from out of the stream bank. For the next five hours or so, we would see nothing of mankind.

Still following the stream, we were pleasantly surprised at the lack of bugs as we encountered just a stray mosquito here and there. The bigger problem was spider webs that kept getting in our faces and sticking to our hands.

After a couple miles of relatively easy walking, we encountered another feeder stream coming in from the south. We turned south to follow the unnamed stream, which feeds down from the base of the slide. We figured looking at the map that it would be pretty straightforward following the stream, but with the lack of rain this summer it also occurred to us that we could just be looking out for a line of mud or dry stream bed.

Luckily, the stream had a decent flow and the going was still pretty easy. We followed the stream and came to a wide-open grass land with the stream flowing through it. The pebbled stream made for even easier walking as we talked about how long it had likely been since anyone else had been there.

Making our way through the open field/wetland, the stream channel became less defined as another stream joined the fray, but we stayed to east of the stream and continued on our way. After a short distance, neither of us felt right and we reevaluated the map and GPS. Neither instrument gives the level of detail we needed to figure out which of the handful of waterways we should be following, so after talking it over we decided to backtrack to an animal herd path.

Venturing up the herd path, surrounded by raspberry bushes and chest-high grass, I kept expecting a moose or bear to pop up in front of us. That didn’t happen, luckily, but we did find more than our share of moose and deer scat, much of which was fresh. Bushwhacking is rarely a quiet endeavor, and any animals we may have come across were warned well in advance.

Realizing we were back on track, the hike again became fairly easy. The stream reappeared, flowing well — a pleasant surprise since we had anticipated mud — and gave some comfort since it was in the low 80s with high humidity and we were both sweating like crazy.

We soon began to gain elevation, following the stream as we made our way up the north side of Moose Mountain. It was still good going, but we stuck to the woods on the sides of the stream as the wet, mossy rocks seemed a little sketchy, especially this far back in the woods.

After 5 miles of walking, we still hadn’t come to the base of the slide, and the woods showed no real sign of opening up. It was getting close to our turn around time, and we got to a small flat spot on the stream with a couple of large, flat rocks.

Christian and I took a quick break and decided that this seemed like a good place to eat lunch and decide if we would push past turn around (I had a little wiggle room) or turn around and head back.

As we ate lunch and played with a couple of crayfish that were (very) surprisingly living in this stream a couple thousand feet above sea level, we decided to call it a day.

On the way out, we roughly followed our path, but deviated just enough to find a clean deer skull, complete with attached antlers, and an old camp of some sort. The camp — no doubt a long-abandoned hunting outpost — was the first sign of humans we’d seen since the glass bottle. There were a couple of rotten 55-gallon drums, an old stove and some pots and pans. Even though I know there are very few places in the Adirondacks that people haven’t been, it was still a bit of a shock.

After getting back to the canoe in one piece, we paddled to one of the backcountry campsites on Moose Pond and jumped in the water. The cool lake felt good, and despite not reaching our destination, the journey itself was more than good enough.

Americans are drinking more now than just before Prohibition