Because they eat only milkweed, monarch caterpillars are toxic to predators. (Photo provided — Cornell College of Agriculture and Life Sciences, Department of Ecology and Evolutionary Biology) 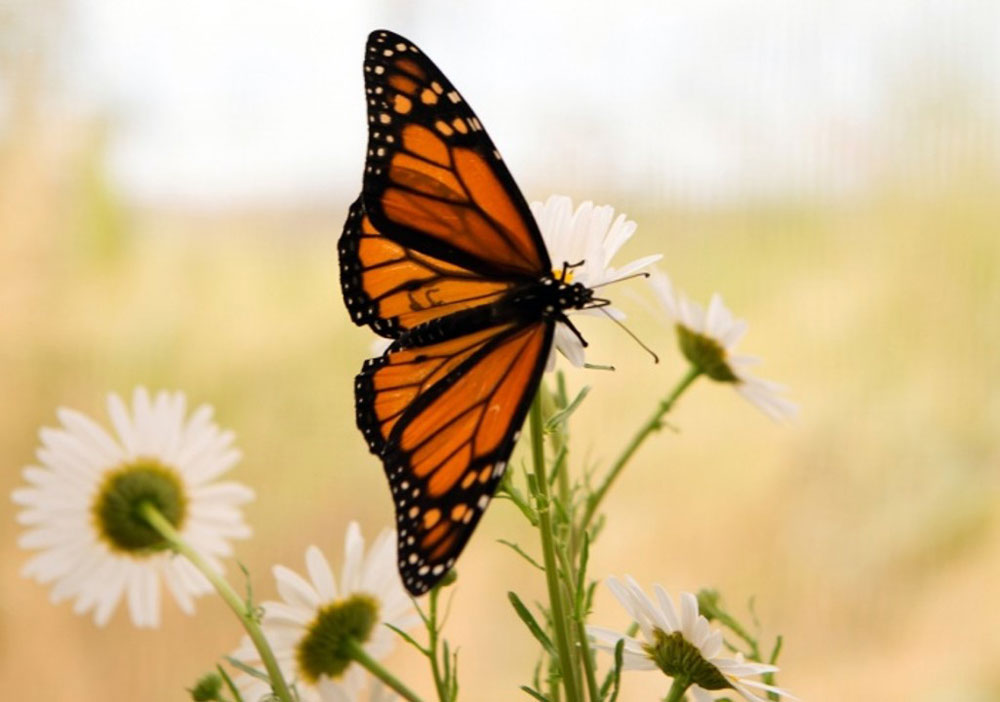 The monarch butterfly may be the most recognized butterfly in the world. With the exception of the polar regions, the medium-size butterflies can be found on every continent on Earth. Their spectacular migration in eastern North America, from breeding locations in Canada and the United States to overwintering sites in Mexico, is nothing short of a miracle and has been the subject of decades of study.

Monarchs have four life stages: egg, larva (caterpillar), pupa and adult (butterfly). The search for milkweed, the only food that monarch larvae eat, is the sole reason for the annual monarch migration.

This is the time of year when monarchs are here, laying their eggs upon the leaves of milkweed plants growing in meadows and fields and along roadsides and rights of way. The eggs hatch in four or five days. Newly hatched caterpillars grow through four larval instars, each time shedding a skin that they’ve outgrown. Before shedding their skin for the fifth and final time, they fasten themselves to twigs and leaves by a sticky, silk-like thread. The green pupae that emerge hang there for 10 to 15 days, during which time the pupal casings harden, forming the chrysalises from which the adult monarch butterflies emerge.

With the coming of cool fall temperatures and shorter days, the last generation of adult monarchs born here and across much of the northern United States and southern Canada will set out for overwintering sites in stands of Oyamel fir growing high in the mountain forests of central Mexico, 2,000 miles away. The entire eastern population will arrive there in late November, so many of them that the combined flapping of their wings creates a clear and constant sound. There they wait for the coming of spring, when they again take flight, this time headed for the Gulf Coast states to breed, lay their eggs and die.

The brood hatched in the southern states will migrate northward, breeding along the way. They arrive here, and at other locations at the northern extreme of their range, beginning in early summer and the cycle starts again. 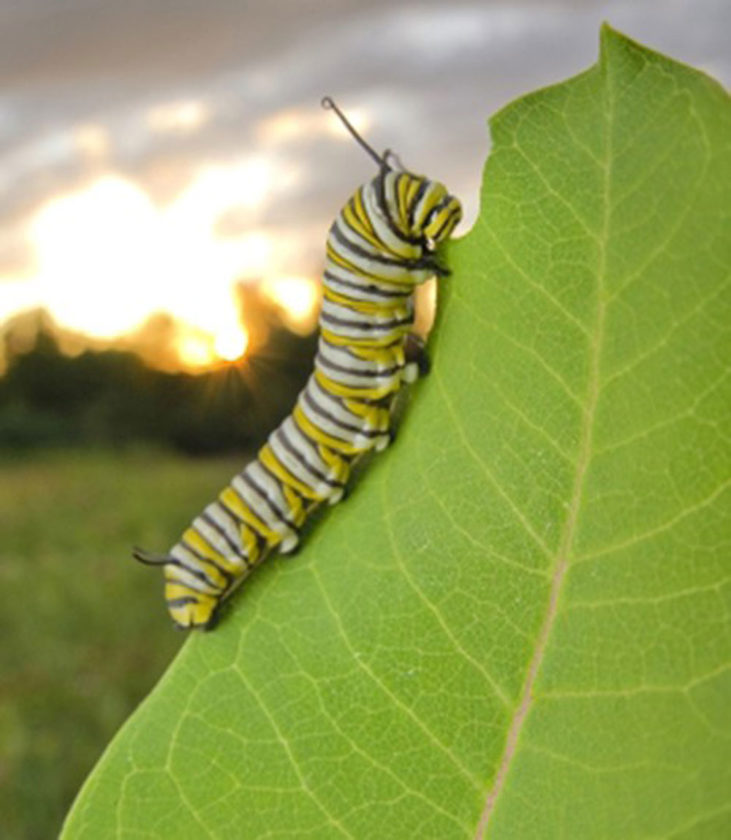 Because they eat only milkweed, monarch caterpillars are toxic to predators. (Photo provided — Cornell College of Agriculture and Life Sciences, Department of Ecology and Evolutionary Biology)

Milkweed is abundant in much of the United States and Canada. But as the name indicates, it’s considered by most to be a weed and, as such, mowed down or eliminated with chemical herbicides. It’s also being eradicated inadvertently as fields and meadows are replaced with housing, parking lots, shopping malls and industrial centers. Such efficient suppression of milkweed has long been considered the greatest threat to the survival of eastern North American monarchs.

Anurag Agrawal disagrees. The Cornell professor of ecology and evolutionary biology (James A. Perkins Professor of Environmental Studies) and senior author of a paper titled “Linking the Continental Migratory Cycle of the Monarch Butterfly to Understand Its Population Decline,” published April 4, 2016, in the journal Oikos, believes “lack of milkweed … is unlikely to be driving the monarch’s population decline, as the problem appears to occur after they take flight in the fall.” Milkweed is not a food source for adult butterflies during their southern migration in autumn.

Agrawal and the scientist co-authors of the paper — lead author Hidetoshi Inamine, a graduate student in the field of ecology and evolutionary biology at the time; Stephen P. Ellner, Horace White Professor of Ecology and Evolutionary Biology; and James P. Springer of the North American Butterfly Association — hypothesize that the real threats to monarch populations are a scarcity of autumnal nectar sources, weather, and habitat fragmentation. Their research was funded by Cornell’s Atkinson Center for a Sustainable Future.

While at Extension, I became aware of ongoing public concern about the risk that Bt corn might present to monarchs. Bt corn is bioengineered with a gene from the soil bacterium Bacillus thuringiensis, which is toxic to European corn borer caterpillars, a significant crop pest, but shown to have no effect on many “non-target” organisms (e.g. honeybees, ladybugs).

Bt corn is, however, toxic to monarch butterfly larvae. But monarchs don’t eat corn. The danger is from exposure to Bt corn pollen, which contains crystalline endotoxin from the bacterium genes. When the pollen is dispersed by the wind, it lands on other plants, including milkweed.

A collaborative research effort across the U.S. corn belt and Ontario (University of Guelph), coordinated by the U.S. Department of Agriculture’s Agricultural Research Service, specifically addressed the impact of Bt pollen on monarch butterfly and other caterpillar species. The studies showed that monarch caterpillars have to be exposed to pollen levels greater than 1,000 grains per square centimeter to show toxic effects. Caterpillars were found to be present on milkweed during the one to two weeks that pollen is shed by corn, but corn pollen levels on milkweed leaves were found to average only about 170 grains per square centimeter, posing only a negligible threat.