Three in the running to represent District 7

SARANAC LAKE — There are three people campaigning for a seat on the Franklin County Legislature to represent District 7, which includes Saranac Lake and Franklin, but there will likely be four names on the ballot come Election Day on Nov. 8.

Wenske said when he joined the race, he had wanted to get into politics and the Republican party didn’t have anyone running for the District 7 county seat. Now that Branch has joined the race as an independent candidate, Wenske said he’d rather see his friend Branch represent the county.

Franklin County Republican Election Commissioner Tracy Sparks said the deadline to decline a party nomination has passed. Wenske is seeing if there’s any way he can get his name removed from the ballot, but unless he moves out of the district or dies, it’s unlikely he’ll be able to.

“The scenarios in which he could take his name off is literally, like, death,” Sparks said.

Ellis was appointed by the county board to fill former legislator Barb Rice’s seat in June 2018 after Rice was appointed to a role in the governor’s office. Rice had asked Ellis to take her county seat appointment.

Ellis ran for the one-year remainder of Rice’s term in November 2018 and ran again in 2019 for a full term. Now, she’s seeking her second full term.

She said having other people on the ballot is a “great thing,” giving voters a choice. But she believes she’s the best candidate for the job.

In the four years she’s been on the board, Ellis said she’s become known as someone who will “work very hard for everyone.”

“I’ve been told I’m the hardest working legislator on the board,” Ellis said.

It’s not the legislating that Ellis enjoys, it’s helping people with problems the county can solve — whether it’s signing someone up for Medicare, social services or Meals on Wheels; getting the Department of Transportation to improve crosswalks; or hosting county vaccine clinics during the pandemic.

“I think we’ve done some really good things on the board,” Ellis said. “That’s really satisfying.”

She said the county can help with some of the largest issues people face in the area — housing and broadband.

During the pandemic, when people were struggling to keep up on their property taxes because of lost wages or revenue, the county gave exemptions for fines on back taxes so they would not be accruing debt. She estimates that exemption allowed 1,300 people to keep their properties in the past two years.

Ellis says she worked hard on broadband — writing three federal funding requests for broadband money in recent months, and helping the town of Franklin with a request, which is moving forward soon, she said.

When the state’s Empire Broadband Survey went out to New York’s 62 counties, Franklin County placed second in the state in survey response — 6% of the population responded.

“The decisions about broadband funding will be based on how well the state understands who are served and who are unserved,” Ellis said.

Ellis said the county is looking at how to get money for establishing new child care facilities, moving things along for a land bank to tackle the affordable housing problem and connecting residents with county services.

“I think we are just doing exceptional things,” she said.

And she wants to continue the work, see it through, and make her plans a reality.

Branch’s “Common Ground” party line is named that because he said he wants to find some common ground on the legislature.

He said this is not exclusive to Franklin County. He sees local politicians everywhere entrenched in national politics and forgetting their local obligations.

Branch wants to bring things back to the days he remembers where people would have their political differences, but all roll up their sleeves and go to work for the people.

Branch said he would bring “no bias” to the board and would do what the people ask him to do. He wants to represent everybody regardless of affiliation. He said he is not seeing this as much as he’d like to, currently. Members of certain political parties get more of a voice, he said.

Branch said he’s been thinking about running for a while, and while the recent decision was “cumulative,” he also cited Ellis’s recent controversies involving allegations about her decisions on the board and the actions of her husband, Saranac Lake village Trustee Rich Shapiro. Ellis has been accused of using personal and political feuds ito nfluence her decisions with the county’s tourism contract.

“I’d be dishonest if I didn’t think that some recent actions were a part of that,” Branch said.

Ellis has said her decisions on the board are for the county, and not influenced by personal relationships.

Branch said that recently, several people have asked him to run.

Branch is a recent addition to the ballot. He began collecting signatures on May 28, three days before the deadline on May 31.

Branch was on the Saranac Lake Central School District Board of Education during the start of the coronavirus pandemic, and he said when schools went remote, the need for strong internet access — especially in towns like Franklin — was highlighted.

He said internet for families in the district is “limited at best” and that students and parents need it, whether they are learning and working remotely or just living normal life.

Carr said after years of counseling people and representing them in courts, school and county departments, she wants to represent them directly to the county.

She’s worked at the inpatient program at St. Joseph’s Addiction Treatment and Recovery Centers, at NorthStar Behavioral Health Services, as a school counselor in Tupper Lake and she owns her own counseling practice in Saranac Lake now.

Carr is also a recent addition to the ballot. She began collecting signatures on May 26, less than a week before the deadline on May 31. She gathered enough signatures and the period to challenge petitions has closed.

Carr has worked with many county agencies and said she understands the people who use them — foster kids and parents, teachers, school administrators, prison guards, people in prison and district attorneys. She said she can connect the “top” and “bottom” levels of society.

Carr initially wanted to run for a Harrietstown justice position, but said being on call 50% of the time would be too much time for her family and job. People have suggested she run for the legislature in the past, but at the time, she said she didn’t know what a legislator did. Now that she does, she said her perspective and knowledge fit the position well.

“There are so many people that struggle with county services that don’t know who to go to to give feedback,” Carr said. “I was like, ‘Oh, these people should be calling their legislator.'”

The county’s systems are working, she said, they’re just not as “effective and efficient” as they should be.

Carr said good ideas need to be run by the people they’re meant to help and the county should get feedback on how the board’s decisions really effect the community.

Carr is running on the “Independent North Country” party line because she said that, taking the party out of it, she believes she has the best resume and skills for the job.

She said she’s not promising that she can make everything a “best case scenario” but she believes she can improve outcomes overall.

She said she used to be proud of the help the county offered. Now, she’s not as proud. The tone is different, she said.

“I worked with probation and DSS all the time and they were wonderful, but something has happened in the past five years that they’re not as wonderful,” Carr said.

She’s not sure if this was a philosophy change or the fact that more kids are in county care because of drug epidemics.

Carr feels Franklin County Social Services puts children in foster programs too soon, keeps them in county care for longer than before and does not give foster parents the resources they need.

Children usually want to be with their primary parent, she said.

Other counties she’s worked with, like Clinton County, which has a significantly higher population, have more resources, including facilities for visitations.

Carr said she’s a “public servant, not a politician,” and she wants to work for the people.

“Out lowest tier is not really being given the resources to succeed,” Carr said.

Wenske said he is supporting Branch for the county seat, and though his name will likely still be on the ballot, he will just not campaign for himself.

“Now that he (Branch) is running, I think with his past political experience … I think he would make the best candidate to run against (Ellis),” Wenske said. “I’m throwing all my support behind Jeff Branch. I think he’s the best one to improve relations. There’s just a lot of negativity going on right now with the current person.”

Wenske retired from the Saranac Lake Police Department at the end of last year, and in the months since then, his contracting businesses have taken off. He said he’s busy and feels he wouldn’t have enough time to devote to board meetings in Malone. He said he doesn’t want to “shortchange” the people of Harrietstown and Franklin.

There will not be a primary election in this district race, so voters will head to the polls on Election Day, Nov. 8. Polls on that day will be open from 6 a.m. to 9 p.m.

The last day to apply for registration to vote in this election is Oct. 14 and applications by mail must be received by Oct. 19.

The last day to change an voter address is Oct. 19.

Absentee ballots for the Nov. 8 election must reach the county board of election by close of the polls on Election Day or be postmarked no later than the day of the election and received by Nov. 15. 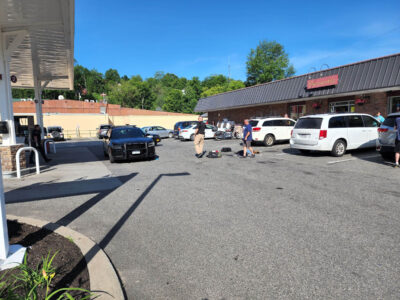 LAKE PLACID — The Lake Placid Village Board of Trustees is proposing an increase to the village’s sewer rates ...

TUPPER LAKE — Nedd Sparks will be on the Republican Party line in the Nov. 8 election for the Franklin County ...

The libraries in the Clinton-Essex-Franklin Library System are currently offering discount passes to area museums. ...

Man with knife shot by police in Saranac Lake