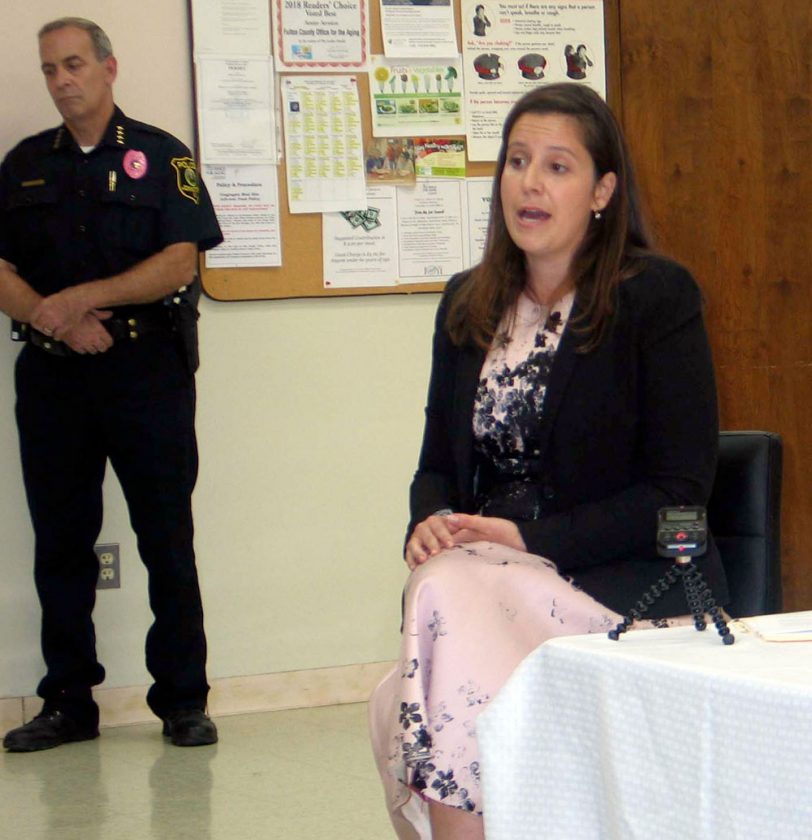 Rep. Elise Stefanik, R-Schuylerville speaks at a Coffee With Your Congresswomen event on Oct. 10, 2019, at the Johnstown Senior Center. (Provided photo — Briana O’Hara, The Leader-Herald)

Rep. Elise Stefanik’s tele-town hall conference call Thursday was more emotional than ones in the past.

She interacted with constituents on the conference call, hearing their troubles, answering questions and listening to their opinions — many stemming from the coronavirus pandemic.

Topics included the intangible, such as love and depression; the bureaucratic, such as federal aid and gun laws; and the political, such as voting and Antifa.

A man named Drew from Canton who did not give his last name, shared how he met his fiancee three years ago while touring World War II sites in Europe.

“We kind of couldn’t let go of each other,” he said.

They did a long-distance relationship and eventually got engaged in Italy.

She is from Poland, and she has gone through the K-1 visa process to come to America.

“The timing on it couldn’t have been worse, because we go approval right when COVID hit,” Drew said.

He said the deadline for her to get here is Aug. 18, but the U.S. travel ban from Europe is keeping her away.

He said he is an independent voter, so he reached out to representatives on both sides of the aisle about this issue and only got help from Stefanik’s staff. He praised the work they had done so far but said things do not look promising.

“It really looks like at this point, because of how things are, we’re just sort of going to be cast aside,” Drew said. “As somebody who has always followed the rules … it sort of makes you lose faith in your government, that the one time you want something from your government, they aren’t there for you.”

Stefanik said she would follow up with the proper agencies — the departments of Homeland Security and State — to see his case through.

Tanner Miller, from Watertown, said he was concerned about mental health during the pandemic. As a man who said he has struggled with suicidal depression for years, he said he was trying to get in contact with his care coordinator, but the virus has made it hard to link up with them now.

Stefanik said she would meet with him individually to help him get in contact with his care coordinator.

“Do you have our backs?”

Several questioners were looking for Stefanik to back their ideology, asking if she would support certain political ideas or denounce certain people.

For the most part, Stefanik refrained from directly supporting the more extreme ideologies but did not go as far as to denounce them.

One man asked for immunity if he commits an act of violence in “self-defense” against protestors. Scott Lowrey said he lives in Watertown and commutes to Syracuse.

“I’m concerned about the security on the roadways due to the recent protests and civil unrest in the country,” Lowrey said. “A lot of the state leadership and the Democrats in this state, they don’t have our backs as far as drivers trying to get from point A to point B.

“It seems like they’re going to prosecute us if we’re trying to get out of danger or defend ourselves from crowds trying to pull us out of vehicles.

“So I was wondering, do you have our back in this area, if one of us was to find themselves in that situation and we take the necessary measures to defend our security and our families inside our cars?”

Stefanik thanked him for his question and said she believes law enforcement needs proper staffing to keep roads safe.

Robert Brand from Malone said he was worried about Antifa a term used for “anti-fascist” activists who take more extreme measures than other protestors.

“Antifa is a global phenomenon. It is funded and organized. It is an emerging threat. It’s probably one of the biggest threats we face,” Brand said. “With our phenomenal intelligence capability, why have we not arrested — with extreme prejudice — those people who are running this organization?”

Stefanik said she agrees with the U.S. Department of Justice in designating Antifa as a domestic criminal organization.

Kenneth Cobb asked Stefanik, who is on President Donald Trump’s reelection team for New York, whether she still supports him.

“Have you have given any second thought about your unbridled support for him earlier this year, based on the performance of our economy in today’s news, as well as the 150,000 dead Americans?” Cobb asked.

Stefanik said she supports the president and listed some of the accomplishments she said he’s delivered for the North Country, but she said she is independent of him and does not follow his lead.

She said she puts her district first, before Trump.

Many questions were around COVID-19 relief, reopening and assistance.

Several callers said they were veterans looking for medical help, which has grown difficult during the pandemic, because Veterans Affairs hospitals have closed. Stefanik said VA hospitals need to reopen and told these people she would help them individually. She also said she is trying to get co-payments for veteran medications reduced.

Two people who said they are essential workers asked for hazard pay as they work day-to-day during the pandemic; and Stefanik said she supports that.

A man named John from Stillwater said he is retired and has enough money that he doesn’t need second stimulus check. He said “it’s wrong” that the money does not go to people who need it more. He said future relief money needs to differentiated by need to focus it toward the poor.

A man named Bradley Arnold said he feels New York state is “dragging its feet” on reopening. He said he hears about more cases of the virus every day but said the death rate has dropped “significantly.”

Stefanik agreed that the state is “dragging its feet” and called Cuomo’s NY on PAUSE order “one size fits all.” She had supported a regional approach to reopening, which the state has operated on.

A man named Michael said the Constitution guarantees freedom of religion, but some states are limiting church services to 50 people. He said if other businesses can have 50% of their occupancy, who can’t churches? New York has raised its church capacity limit from 25% to 35% but lost a court case challenging the discrepancy with 50% for restaurants.

“We should not be limiting people’s faith,” Stefanik said.

Gino, a landlord, said the landlord laws Cuomo extended from New York City to the whole state last year hurt him, and that with the pandemic-related rent freeze, he is more worried.

“How is a small landlord like myself supposed to pay my mortgage?” Gino asked.

Stefanik said too many state laws focus on downstate issues without considering upstate, and she said there should be Small Business Administration loans made available for landlords. She also said getting people back to work sooner will result in them being able to pay rent.

“Would you consider running for the Senate against (Kirsten) Gillibrand?” Bradley Arnold asked. “I think you’re awesome, and I think you’d make a good senator.”

Stefanik laughed and said she is focusing on getting reelected to Congress in November.

“I’m just wondering about your support for the call for the impeachment of Governor Cuomo for his handling of the coronavirus,” Matthew Smart from Watertown asked.

Stefanik said she has not advocated for his impeachment but has opposed his actions and advocated against his idea to move resources from upstate to downstate as cases rose.

She also said she is supporting an investigation into his choice to require nursing homes to accept COVID-19-positive residents leaving hospitals, which allegedly led to deaths around the state.

LuAnn LaBarge asked why in New York prison inmates will be able to have visitors while nursing homes still cannot.

Stefanik called this Cuomo’s “failure of leadership” and said the decision to not allow visitors at nursing homes was “arbitrary.” She said their isolation is severe and said it has been “heartbreaking” to hear of families forced to meet through windows or over video chat.

“I don’t think it’s fair that we have not put into place safe guidance to ensure that our nursing home residents are able to visit with their loved ones,” Stefanik said.

Loneliness impacts their mental and physical health, she said, adding that she believes nursing homes and county public health should make decisions on visitations.

David Ellis from Hammond is a transportation worker who drives all over the eastern U.S. He said because of a lack of concealed carry reciprocity laws, he cannot bring his handgun across some state lines for protection. He asked if Stefanik would sponsor a national, universal reciprocity bill. She said she supports increased reciprocity.

Robert, a retired corrections officer, asked if Stefanik has his “brother and sisters’ backs” among prison guards.

“They punch in and face the unknown, and hope they get to go home,” he said.

Stefanik said she’s advocated for prison staff to be able to wear personal protective equipment when the state did not allow it to early on, advocated for state and federal prisons to stop transfers of untested prisoners, and worked to get COs quarantine pay.

In an interview on “Fox and Friends” Thursday on Fox News, Stefanik said it is the “height of hypocrisy” that Cuomo is launching an investigation into a crowded Chainsmokers concert in the Hamptons while not doing the same for Black Lives Matter protests that brought thousands out to the streets over the past two months.