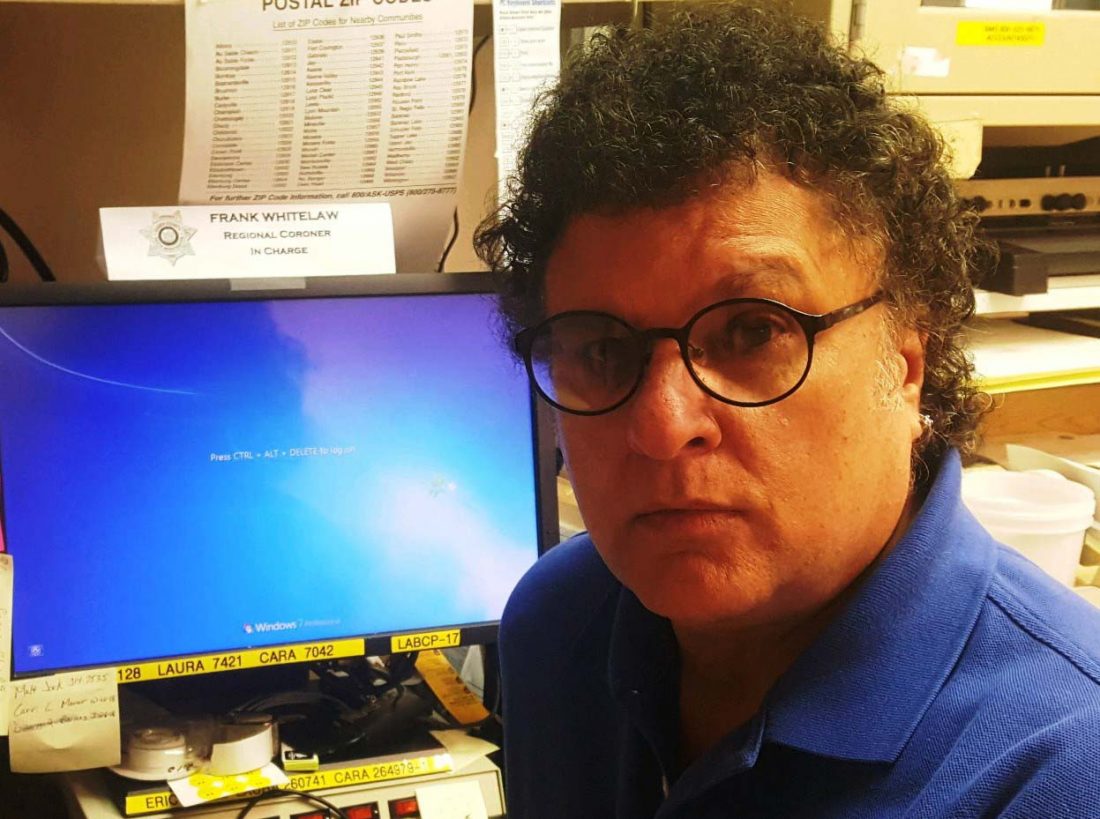 Frank Whitelaw is seen at his previous job as an Essex County coroner in the morgue at Champlain Valley Physicians Hospital in Plattsburgh in 2018. He is running for St. Armand town justice in November. (Provided photo — Frank Whitelaw)

BLOOMINGDALE — After St. Armand town justice Jay Niederbuhl resigned from his court position last month the recently-resigned former Essex County coroner Frank Whitelaw has resurrected his public career to run for the position, and currently he is the only candidate on the ballot.

Niederbuhl, who started a four-year term in 2017, suddenly resigned two years into into his term on June 18. He did not respond to a request for an interview in time for this article.

St. Armand town Supervisor Davina Winemiller said she called Whitelaw and asked if he wanted to run for the position.

Winemiller said she’s known Whitelaw for a while and that she asked him to run because she believes he has “high moral character.”

Whitelaw said he had to think about it, as he said he had just gotten out of a “political nightmare” in his county coroner position.

“But when I thought about it, being a judge, you’re more or less left alone by the politicians,” Whitelaw said.

On Monday, Whitelaw filed petitions to run with the signatures he gathered. He is running on the Individual Integrity party line, a party he created. Winemiller said as of Tuesday morning no one else has filed to run for the position. Thursday is the last day a candidate can file to run.

Whitelaw said there is a “steep learning curve” he will be on, if elected, but that he will throw himself into learning as much as he can.

He said he will ask to sit in on North Elba town justice Dean Dietrich’s court sessions to “learn the ropes.”

Whitelaw has a legal background from his time as a state police trooper, but he said there are many new laws, including the bail reform passed last year, which he needs to learn about.

He also wants to get a glimpse of how actual court procedure and civil litigation occurs.

“Other than watching Judge Judy a lot, I’m not versed in civil (litigation),” Whitelaw said.

Whitelaw said “fairness and compassion” was important in both his state police and coroner jobs, and that he would bring that into the courtroom, too.

“The law might be black and white, but a lot of times the color of the law is gray,” Whitelaw said.

He said he would not favor state police because he used to work with them.

“I represent the people,” Whitelaw said. “If they (the state police) bring me a bad case and I have to dismiss it, well, that’s just the way it goes.”

Dietrich is covering St. Armand court until the end of the year.

The part-time justice position takes about 30 hours a week and pays around $20,000 a year.